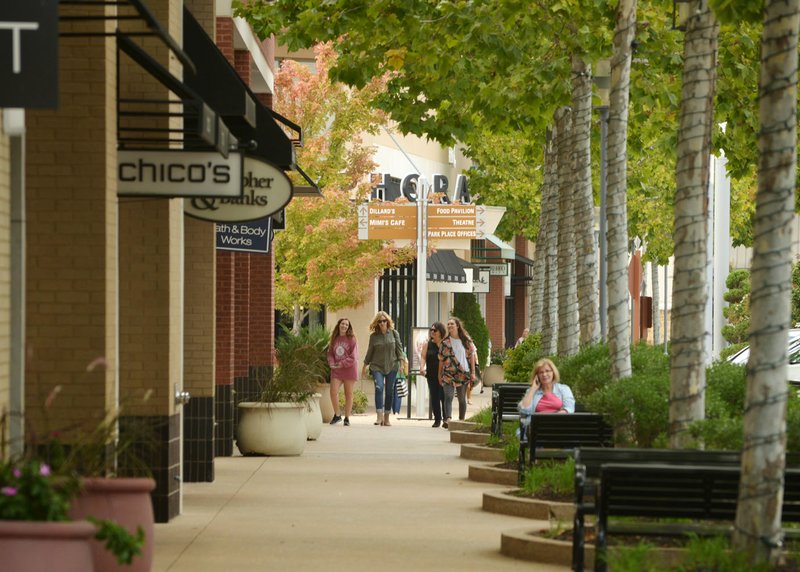 City leaders often say what's good for one city is good for the entire region. That may be true, but they still like it when shoppers spend money in their city in the competition for sales tax dollars.

Arkansas collects a 6.5 percent sales tax statewide. Counties and cities can set their own sales tax rates. For example, a T-shirt purchased for $10 would cost $10.76 in Goshen and $11.08 in West Fork because of different rates of city sales tax.

City leaders point to a strong economy, growing population and new retail operations as reasons for the growth. Another explanation can be attributed to Amazon. The online retailer started collecting sales tax in Arkansas in March 2017 on items not from a third-party seller.

Washington County Treasurer Bobby Hill said he budgets conservatively and is wary of overestimating revenue. Hill said in 2017 the county projected receiving $6.9 million and got $7.3 million from its 1 percent sales tax. Hill said he is projecting $7.5 million this year for the general fund. The county also collects a 0.25 percent sales tax that is dedicated to jail operations.

Benton County Comptroller Brenda Guenther said the county received $8.8 million in 2017 from its one-cent tax and projects $8.9 million this year.

Benton County Judge Barry Moehring said the county is concerned about unusually large receipts for the first two months of this year. State laws allow businesses to ask for rebates of sales taxes paid under certain circumstances, generally tied to new construction or expansion and job creation. Moehring and Guenther said they are setting aside money, including $689,000 so far, to cover requests. The state does not identify individual businesses in its sales tax reports, so the county can't say where a rebate request might come from.

Bentonville Mayor Bob McCaslin said his city has the same concerns about recent sales tax receipts and put about $5 million aside. McCaslin said the city has budgeted for revenue to grow from $10.5 million last year to about $11.1 million this year.

Paul Becker, Fayetteville's finance director, said the city budgeted just under $21 million in revenue from the city's one-cent sales tax in 2017 and received just over $21 million. For 2018, he said, the city has budgeted almost $22 million.

"Our economy, our sales tax revenue, continues to show steady growth," Springdale Mayor Doug Sprouse said. "Our unemployment is as low or lower than anybody in the state. Our Chamber of Commerce and the Downtown Springdale Alliance say they are fielding more calls than ever before about businesses interested in locating here. Right now, things are very good."

Sam's Club returned to Springdale in May. The warehouse club operated in Springdale until 2007 when it moved to Fayetteville. City leaders repeatedly pointed to the store closing as a loss of about $1 million in sales tax revenue annually.

Casey Wilhelm, finance director for Rogers, said the city received about $18.4 million from the tax in 2017, which was almost $2 million more than budgeted. She said the city is again estimating receipts at $16.5 million Wilhelm said the city tracks revenue throughout the year, and if receipts exceed projections and there is a need, the City Council can approve budget adjustments.

"Overall, the trend seems to be very stable with a slight increase," Wilhelm said. "We try to be very conservative, and we've held back on purpose. We don't want to go over our projections."

The increasing revenue in Northwest Arkansas mirrors growth in the state and national economies and is likely to continue for the near future, according to Mervin Jabaraj, director for the Center for Business and Economic Research at the University of Arkansas, Fayetteville

"This is the 105th consecutive month of economic growth," he said. "That is tied for the second-longest expansion ever."

Arkansas' general-revenue tax collection in February increased by nearly 6 percent over the same month a year ago to $457.9 million, the Department of Finance and Administration reported. The record for February was $432.4 million in 2017, according to Whitney McLaughlin, a tax analyst for the finance department. Individual income and sales and use tax revenue both grew last month compared with a year ago. They are the two largest sources of general revenue for the state.

Across the nation, states' tax revenue appears to be relatively strong, with 27 states reporting general sales tax revenues on target or above estimate, according to a report by the National Conference of State Legislatures.

"All the indicators are that we're very healthy right now," McCaslin said. "The national economy is healthy. I am very optimistic." 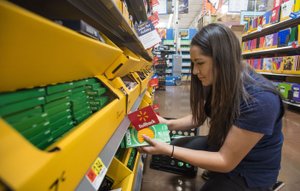 File Photo/NWA Democrat-Gazette/BEN GOFF @NWABENGOFF Estela Martinez, a Walmart employee, stocks the shelves in the school supplies area with pencils at the supercenter on Pleasant Crossing Boulevard in Rogers. 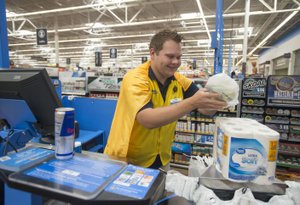 File Photo/NWA Democrat-Gazette/BEN GOFF @NWABENGOFF Jonathan Cousins, Walmart employee, rings up a customer at the supercenter on Pleasant Crossing Boulevard in Rogers. Cousins and other associates were offered capes they could wear as part of the retailer's 'everyday hero' back-to-school theme.