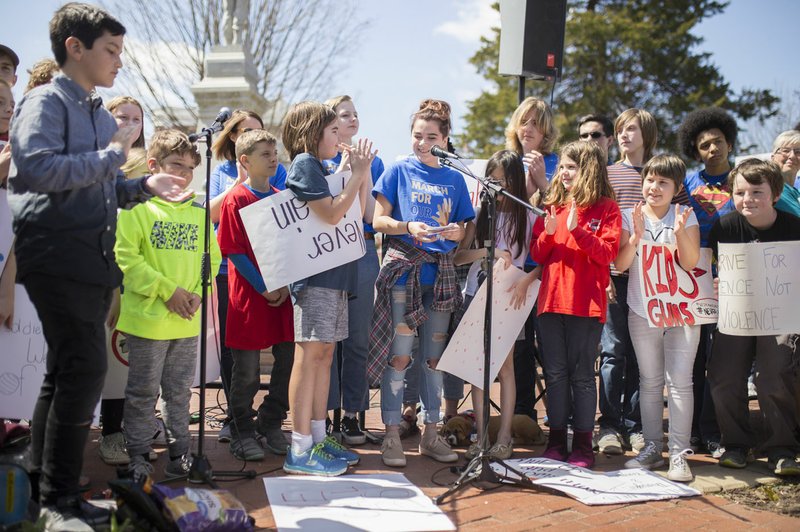 Almost 600 students and supporters, chanted and demanded action Saturday in Springdale and Bentonville as part of the national March For Our Lives movement, which champions student safety and comprehensive gun regulation to end mass shootings.

"The younger generations have assuredly been a large part of the biggest movements in American history. It's a common belief that we don't know what we're talking about when we are the ones issues like this affect the most. We call B.S.," Taylor Gibson, a Bentonville West High junior, said in front of the Confederate monument in the center of the event at the downtown square. "This generation will not be silenced."

March for Our Lives Mission

Students behind the Bentonville and Springdale events Saturday said they stand behind the national March For Our Lives message.

“March For Our Lives is created by, inspired by, and led by students across the country who will no longer risk their lives waiting for someone else to take action to stop the epidemic of mass school shootings that has become all too familiar.

“The mission and focus of March For Our Lives is to demand that a comprehensive and effective bill be immediately brought before Congress to address these gun issues.

Gibson said her 5-year-old sister is worried about her own safety and Gibson doesn't want her to have to endure 12-plus years of this fear.

About 450 people attended the Bentonville rally at its highest point after noon, said Gene Page, Bentonville police spokesman. A few counter-protesters who mainly remained just outside the square, including patriot group the Hiwaymen and the nationalist, alt-right organization ShieldWall Network.

A few verbal warnings had to be given when some people got too close in argument, said Gene Page, Bentonville police spokesman, but no arrests were made related to the events Saturday.

"This is how a rally is supposed to go," Page said. "We are satisfied everyone cooperated with law enforcement, and we count it as a success."

About 150-200 people gathered at 10 a.m. at Walter Turnbow Park at Shiloh Square in Springdale. Caleb Casey, a Har-Ber High School senior, led the march to South Thompson Street where participators held signs -- such as "Books not bullets" and "Thoughts and prayers aren't enough" -- for drivers to see.

Casey said his father is a card-carrying member of the National Rifle Association, and his family doesn't approve of his participation in the march. He said he has made his own opinion on what is right.

"The Parkland shooting opened my eyes. This could have easily been my school or any of the schools here. My friends and I met and knew we needed to do something to further draw attention to the subject and bring Springdale into this," he said. "I don't think some people understand: it's not about Democrat or Republican; it's about student's lives."

Each event had moments of silence for each of the 17 people who were killed Feb. 14 at Marjory Stoneman Douglas High School in Parkland, Fla. In Bentonville, students read the names and a little bit about each.

Both had numerous speakers, all students, teachers or parents. All called for action. The Bentonville crowd fervently chanted "Vote them out!" numerous times.

Sadie Bell, organizer and Bentonville High senior, invited Arkansas representatives and senators and received rejection letters from them, she said.

"We are literally fighting for our lives and ask that you protect kids, not guns," Bell said, addressing politicians. "It's impossible to think that accepting upwards of $1.5 million from the NRA doesn't influence your policy. I don't have to have everything figured out nor do I have to have a plan laid out for you; that's your job."

Sen. John Boozman commented on the March For Our Lives events and issues at hand, saying schools should be an environment where students can focus on learning and educators on teaching rather than worrying about their safety.

"Clearly, there are some things we can and should do to help secure schools from threats. Gov. Hutchinson, along with state and local leaders, are exploring and implementing ways to best provide that security and I support their efforts," Boozman said via email. "As a former school board member, I believe that parents, teachers and school administrators must be empowered to make those decisions at the local level. I support their ability to do so."

Rep. Steve Womack said in an email he welcomes and encourages the right to free speech and peaceful protest.

Bell and other students spoke further about their desire to see more extensive background checks, the minimum age to own a firearm raised to 21, stopping those convicted of domestic violence from owning guns and allowing the Centers for Disease Control and Prevention to research gun violence.

Federal research of gun violence had been halted for more than two decades after a 1996 ruling Congress passed under pressure from gun lobbyists -- known as the Dickey Amendment after its author Rep. Jay Dickey, R-Ark. -- has essentially killed its funding.

However, language in the $1.3 trillion spending bill the House passed Thursday afternoon may open the door slightly to restoring federal funding for gun research.

The language, which is still pending passage in the Senate, clarifies the Centers for Disease Control and Prevention can indeed conduct research into gun violence.

Members of the Hiwaymen and its Arkansas chapter Freedom Crew said they came to stand for the constitution and their history and heritage. They said these marches are endangering their Second Amendment rights. Any regulation on assault rifles is a dangerous slope, member James Del Brock said.

Bell said in her speech they do not want to take away people's guns but there should be a limit to the amendment, just like the 1st Amendment has a "clear and present danger" clause.

Michelle Boles is a former teacher at Fayetteville and Springdale schools and said she grew up in a family that hunted and owns a rifle and shotgun herself.

"When I was a kid, we didn't have seat belt laws. We barely had speed limits on rural roads. But we enacted laws to protect people," Boles said. "We aren't allowed to carry around a bazooka or machine guns. And you just don't need those rapid-firing guns. If none of these shooters had had rapid-fire weapons we would have had many fewer deaths. "

Billy Roper from The Shield Network group, which describes themselves as "white nationalist preppers," said the students participating Saturday were being brainwashed by the far-left agenda.

His group believes the only way America can become a safe, trusting society is to remove diversity and are not afraid to say they represent the far right, he said. Other efforts and proposals, such as increased mental health services, would just treat some of the symptoms, not the problem, he said.

"They are giving away their rights away, essential liberties, for a little temporary safety," Roper said quoting Benjamin Franklin. "America is becoming more polarized every day and it's going to lead to a bloody conflict. It might get racial. The left know this and wants to disarm those against them."

Roper said he was a former history and civics teacher. Many current teachers were out in full support of the students and their cause.

Holly Howard, a Bentonville High English teacher, spoke at the square about how much Feb. 14 impacted her.

"I followed one of (Parkland Schools') English teachers. I had gotten the idea for the lesson I was teaching that day from her Instagram account," Howard said. "Then, my lesson plan was out the window. As a classroom family we sat and talk about our new reality. I couldn't help compare myself to her."

She said when she dreamed of becoming a teacher, she imagined reading great literature with them and discussing the deeper meaning of a work.

"Not answering questions about how to block the door so an intruder couldn't enter or how long it would take for someone to shoot the handle off. These are real questions my students ask me. This isn't what I signed up for. I can't let fear take over. I have a job to do. I have to teach."

This story has been corrected to show Holly Howard is a Bentonville High English teacher.