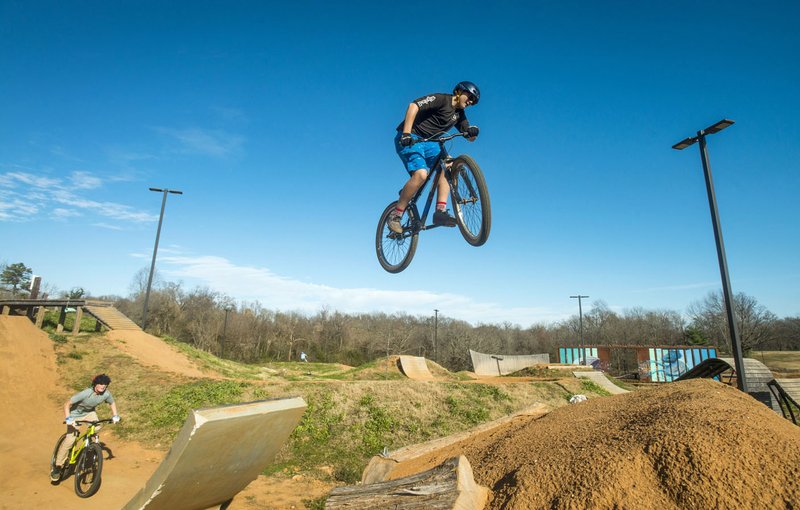 File Photo/NWA Democrat-Gazette/BEN GOFF @NWABENGOFF Owen Polumbo (left) and Carson Brantley, both 13 and from Rogers, catch air on the expert line at The Railyard Bike Park in Rogers.

To attract mountain bikers from throughout the country to Northwest Arkansas, regional planners adhered to a simple philosophy: Play dirty.

More than 300 miles of soft-surface, single-track trails crisscross the region and double that is being planned. The region has become a major destination for bikers who prefer mud, rocks and hair-raising downhill riding.

WHAT IS IT? Program aimed at getting more women involved in the sport.

WHAT IS IT: Celebration of the 30th anniversary of the International Mountain Biking Association.

WHAT IS IT? Coaching and volunteer training for the National Interscholastic Cycling League program.

WHAT IS IT? Three days of competition racing with more than $160,000 in cash for the winners.

WHAT IS IT? Test the latest bikes and cycling gear during this three-day festival. Pick a bike and test it out. Must have a ticket to demo bikes.

WHAT IS IT? Annual mountain biking festival at the Slaughter Pen trails. Will also include events for the tiny cyclers as well.

Andy Williamson, program director for the International Mountain Biking Association, said he is amazed at the development of the trail system, noting that just a few years ago the region was barely a blip on the national radar.

"When you look at places mountain bikers are going there are a couple of things that are really important," Williamson said. "Obviously great places to ride, the reputation it has, the distance and how long they can stay. And really the dynamic nature of the trails, the diversity of the actual riding experience.

"So there are lots of different trail types. Some might not be appealing to some and some may be to others. Bentonville and Northwest Arkansas really are amazing in the fact that it is the full package," he said.

Leading mountain bikers came to the association's world summit in 2016 in Bentonville. The summit was the ramp that launched the region into national awareness by the mountain biking realm.

How did Northwest Arkansas make that ascent so rapidly?

Members of the Walton Family Foundation planted the seeds, which led to cities jumping on board. Large tracts of land with the perfect terrain of hills and drops made ideal places to create trails.

Some of the top trail-builders in the country created hundreds of miles of single-track trails for all skill levels, said Kalene Griffith, the president of Visit Bentonville.

"The number one thing for Northwest Arkansas is that there is a variety of trails," Griffith said. "You can have an easy ride one day, and the next day have a little more advanced ride."

"The mountain biking trail development is something that the foundation has been investing in for some time," Minkel said, adding it is linked to the group's push for green space preservation. "We have these tremendous natural resources in the region and we want to be able to preserve those natural assets and also ensure that the public has access to them. So one way to be able to do that and make ourselves unique is through mountain biking, a recreation sport you can do here year-round. I think we've been fortunate to have wonderful municipal partners in this work."

Paxton Roberts with BikeNWA has long been an avid outdoors enthusiast. Roberts has made the drive to Colorado many times to experience the opportunities in the summer months when ski resorts transform into mountain biking destinations.

BikeNWA launched in 1999 as the Bicycle Coalition of the Ozarks and works to support and amplify local bike organizations and meets with local elected officials to advocate for better bike infrastructure and bike-friendly policies.

Roberts, like other longtime residents, is amazed at how rapidly the trail system expanded.

"We've had a rich history in the region for decades, like Devil's Den, so we've always had the culture in the Fayetteville area," Roberts said. "With the investment in the trails by the Walton Family Foundation, and the cities as well supporting that, we now have enough to attract people to come here and visit whether it's for a weekend, spring break or a trip over Christmas break, it now has enough trails to offer."

Other factors are helping make the area a major attraction, said David Wright, the director of Bentonville Parks and Recreation.

While others noted top mountain biking destinations offer great soft-surface trails, bikers often have to drive 20-30 miles to reach the trails. That is not the case in Northwest Arkansas, Wright said.

"You have about a hundred miles of trail available to you from the Bentonville square," he said. "That connectivity is unlike anything else you have anywhere. Here, you have people jumping on their bike in their driveway -- their driveway is their trailhead, so to speak -- and they are able to hop on our single-track trails and go get a 50-mile ride in without ever having to get in a car."

The 36-mile Razorback Greenway is the major connector from Fayetteville to Bella Vista. From points on the Greenway, mountain bikers can shoot off to soft-surface trails at Lake Fayetteville, Slaughter Pen and the new Back 40 in Bella Vista.

Minkel said there are more than 300 miles of trails in Northwest Arkansas.

"You have mountain biking trails in places like Devil's Den, which is a state park and that is wonderful. But here, because it connects to a much broader trail system, you can hop on your bike from your house and then hop on the Greenway or natural surface trails," she said. "That uniqueness has attracted international organizations like the International Mountain Biking Association. That is what has generated a lot of the coverage that we get."

The relatively mild climate is part of the marketing strategy that riders can hit the trails virtually 365 days a year.

Another bonus is the close proximity of the trails to downtown restaurants, pubs, live music and more. Within minutes, riders can exit the dirt trails, hop off their bike and grab a bite to eat and a cold beverage to wash it down without having to load the bike and drive.

Roberts is on a leadership committee to determine the economic impact of the growing activity. The foundation is paying for the study. Full details will be released later this year.

"We found more than half the people coming to ride mountain bikes in Bentonville and Bella Vista were from outside the region," Roberts said. "So that's bringing in tax dollars because you can't drive a couple hundred miles and ride without spending money before or after, whether it's gas, dinner, food, lunch, so that has a direct economic impact."

New projects are in the works. The Cohler Mountain Biking Preserve, a 300-acre tract in Bentonville will have 16 miles of soft surface trails and connect to the Razorback Greenway. A host of amenities are planned, including two barns that will be converted into gathering places for cyclists and hikers.

Fayetteville recently announced an agreement with the foundation to buy land on the southeast side of the city that will be called Mountain Ranch. The soft-surface trails will not be far from the Kessler Mountain trail system and the Razorback Greenway will connect both areas.

Wright said communities are working together.

"We're promoting the region, not just our trails. We see value in a person who will travel to Northwest Arkansas and ride the trails everywhere," he said.

Williamson, who works closely with the National Interscholastic Cycling Association, of which there is a growing youth mountain biking league in Arkansas, said the International Mountain Biking Association continues to seek more opportunities for women and youth.

Bentonville will host the IMBA Women's Uprising later this month, a program aimed at getting more women involved, not just as riders, but designing and building more trails. Bentonville will also host the Dirty 30 in June, a celebration of the association's 30th anniversary.

Williamson said the group is committed to introducing more young riders to the sport.

"If we don't give kids a place to play on their bikes today, they won't be adults who value and protect the places to ride tomorrow," he said. "Riding on dirt is appealing to kids ages 6-17 and we have to provide places for them to do that."