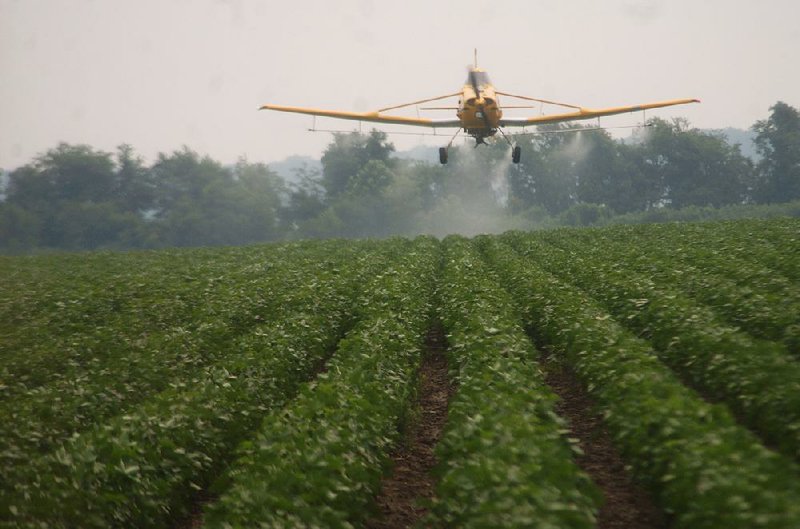 A crop-duster sprays a cotton field near Blytheville with malathion to kill boll weevils in this 2005 photo. The boll weevil hasn’t been found in Arkansas cotton since 2006.

Seeing no weevil, a state panel has approved a rebate of 75 cents an acre for cotton farmers in the long-running fight against a tiny insect that was once their biggest foe.

The rebates from farmers' 2017 payments were approved by the program's foundation board in February.

David Wildy, a Mississippi County cotton grower, welcomed the news. "In these tough economic times for farmers, anything like that will certainly be a help to us, whether it's a check back or a lower assessment," he said. "I'm encouraged that they've got their books in order and can do that."

With low market prices for soybeans and corn and only slightly better prices for cotton, Wildy said he plans to plant 7,000 acres of cotton this year, up from 5,500 acres last year.

Although the boll weevil hasn't been found in Arkansas cotton since 2006, vigilance is required against a pestilence that cost the nation's cotton farmers some $23 billion, through yield losses and higher pesticide costs, over a span of about 117 years, according to the U.S. Department of Agriculture.

"As long as there are weevils in the U.S., we are at risk," Coleman said.

The National Cotton Council in 2005 said the boll weevil cost Arkansas cotton farmers $17.9 million in crop losses and $10.7 million in pesticide expenses in 1996, the year before the state eradication program began.

The Arkansas boll weevil program ultimately borrowed $37 million, including interest, from the USDA's Farm Service Agency to start up its eradication efforts.

Over the years, cotton farmers were assessed as much as $32 an acre to pay off the debt, but those fees generally were lowered as the battle against the boll weevil succeeded. The debt was paid off in 2015 -- three years ahead of schedule.

Assessment fees this year will be $3 an acre, same as last year not including the newly approved rebate.

Coleman said officials always want to cut the fees whenever possible while keeping at least $1 million in reserves each year to restart the fight in earnest if the boll weevil is found again. Last year's $3 fee was assessed on 424,300 acres of cotton, compared with 365,000 acres in 2016, when the fee was $4 an acre.

The boll weevil program's board decided it could give farmers the rebate from last year's payments while keeping the operations account healthy, Coleman said.

"The program continues to succeed, and we've been efficient and economical," Coleman said. "My field staff has done a great job in covering the acreage without having to hire extra people. All those factors contributed to making the rebate possible."

Coleman joined the labor-intensive program in 2000 as a manager of one of the five zones established for cotton-growing operations. She had 200 people working in that zone, in east-central Arkansas, at one time, trapping as many as 2,000 boll weevils a day, she said.

"Some people said we'd never be able to eradicate the boll weevil just because there were so many," Coleman said. "But we did."

Based in Helena-West Helena, the program has four full-time employees working in the fields, plus Coleman. Another two or three workers will be hired for the coming growing season, she said.

The boll weevil can still be found in south Texas, which has the nation's only still-active eradication program, and in Mexico.

"That's why we still have a maintenance program," Coleman said. "We have protocols in place that we'll follow should we trap another weevil here."

Farmers this year have a June 15 deadline to report their cotton acreage, with assessment fees due Aug. 15.