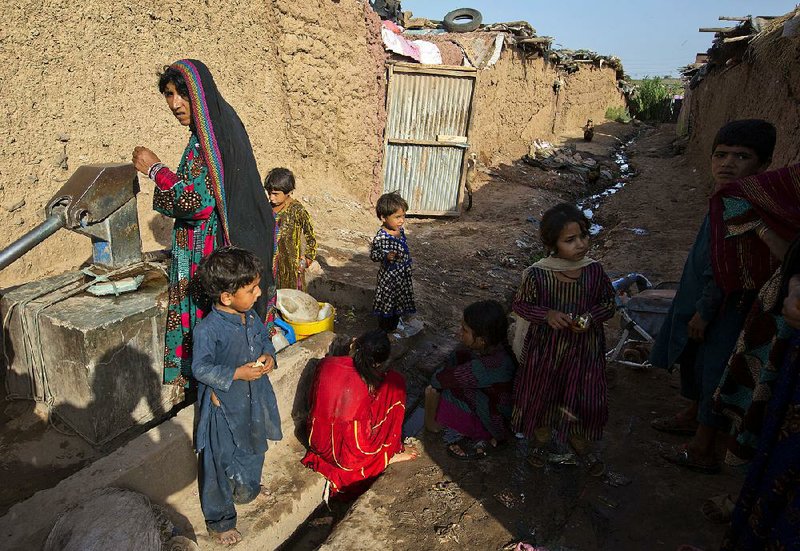 Refugees from Afghanistan fetch water Tuesday near their mud houses in a suburb of Islamabad, Pakistan. According to a United Nations report released Tuesday, Afghanistan was among the countries with the most displaced people.

And through it all, the world's population of displaced people keeps rising.

In a new sign of the collision between surging flows of refugees and the growing hostility in affluent host countries, the United Nations refugee agency reported Tuesday that the total number of forcibly displaced people rose by almost 3 million people in 2017, to 68.5 million. It was the sixth consecutive year that the figure hit a post-World War II record.

The total figure, contained in the agency's annual global trends report, includes refugees, asylum seekers and the internally displaced -- that is, people forced from their homes who have not fled their countries. Refugees accounted for most of the increase.

Ravaged by seven years of war, Syria led with the highest total of displaced people. It was followed by Colombia, the Democratic Republic of Congo, Afghanistan and South Sudan.

Filippo Grandi, the U.N. high commissioner for refugees, said in the report that forced displacement requires "a new and far more comprehensive approach so that countries and communities aren't left dealing with this alone."

The report also said nearly 174,000 refugee children, including those seeking asylum, were unaccompanied and separated from their families. Fifty-two percent of all refugees are children younger than 18, the report said.

The number of unaccompanied children partly reflects parental desperation. They are resigned to sending them away in the hope of better opportunity elsewhere -- even if that means families are torn apart, refugee experts said.

Parents are "not being careless about the decision," said Jacqueline Bhabha, a professor at Harvard's public health school.

The report's release comes at a time when developed countries in the West are growing increasingly hostile to refugees and asylum seekers, with the ascendance of far-right and populist politicians who stoke anti-migrant fears.

In the United States, President Donald Trump's administration has been enforcing a "zero-tolerance" policy on the southern border, separating families to discourage illegal immigration. Defying critics at home and abroad, Trump said Monday that the United States would not become a "refugee holding facility."

Italy's recently formed government and the Maltese government refused to let a rescue ship full of African migrants operated by a humanitarian group disembark. A far-right backlash in Germany is threatening the coalition of Chancellor Angela Merkel, who has championed that country's welcoming posture toward refugees in recent years. Inflammatory rhetoric toward migrants has empowered populists in Austria and Hungary.

Bhabha said the unequal distribution of migrants and refugees was helping drive the political discontent. "If you had a collective commitment, the picture could be different," she said.

The number of refugees surpassed 25 million last year, compared with 22.5 million in 2016.

Five countries -- Syria, Afghanistan, South Sudan, Burma and Somalia, which together account for less than 2 percent of the world population -- accounted for 68 percent of the global refugee population.