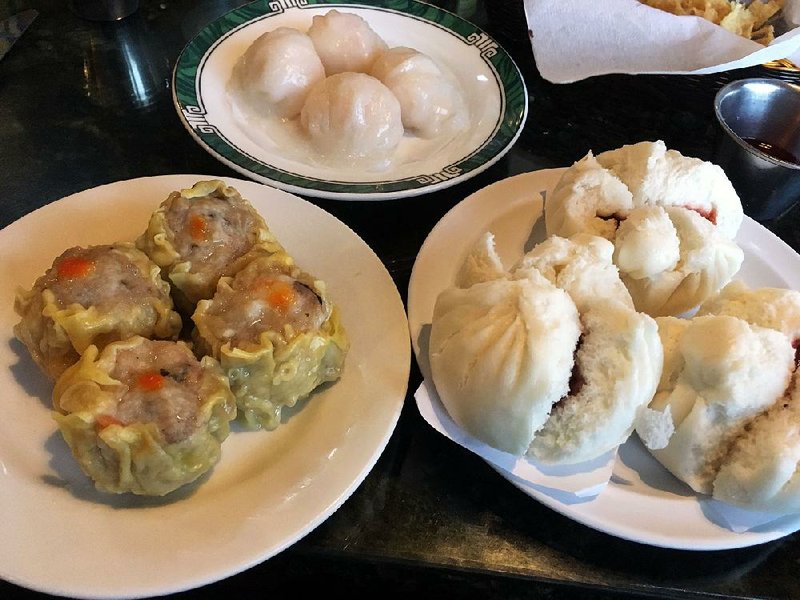 Some of the dim sum at Chi’s Dim Sum & Bistro will move with it when it consolidates with Chi’s Fine Chinese Cuisine on west Little Rock’s Chenal Parkway. - Photo by Eric E. Harrison

Within the next couple of weeks, the Chi family will close its flagship Chi's Dim Sum & Bistro, 6 Shackleford Drive, Little Rock, overlooking the Markham-Shackleford intersection, and will move it west and consolidate it with Chi's Fine Chinese Cuisine, 17200 Chenal Parkway, Little Rock. Just how much of the menu will move along with it is still not certain, but paterfamilias Bill Chi says the move will include at least some of the dim sum items, for which Chi's has been pretty much the only source in the region and which draw a good-sized Asian customer base on weekends. Reports that the Chenal restaurant would expand into the vacant next-door storefront are apparently premature at best. The hours for the Chenal Parkway location, which started out primarily as a to-go operation but a few years ago expanded into what had been a coffee shop at the apex of the L-shaped Centre at Chenal center, probably won't change -- 11 a.m.-9:30 p.m. daily. The phone number is (501) 821-8000.

The family will continue to own and repurpose the building, though we have not yet been able to confirm just what it will become. The Chis' Little Rock restaurant "empire" also includes Chi's Asian Cafe and Sushi Bar, 3421 Old Cantrell Road in Riverdale (but not Chi's Too, 5110 W Markham St., which it sold years ago to a former chef); both branches of Sushi Cafe, in the Heights and in west Little Rock; Lulu's Crab Boil, 5911R St.; and the Little Rock outlet of La Madeleine French Bakery & Cafe, 12210 W. Markham St. They also operate or have pieces of a couple of area hotels, with one in the works.

Phoebe Glass and Amir Salem are going brick-and-mortar with their Little Rock-based Shambala Vegan Mobile Kitchen, opening Blue Sage Vegan Bistro sometime also within the next couple of weeks in the former Mason's Deli space in the River Market's Ottenheimer Market Hall, 400 President Clinton Ave., Little Rock. They'll serve breakfast from 7-10 a.m., including biscuits and milkless Southern black pepper or chocolate gravy, "chick'n" and waffles (actually cauliflower -- "We've had people spit it out because they thought we had actually given them meat," Glass says) and grab-and-go oatmeals, fruit salads and chia pudding; the 11 a.m.-2 p.m. lunch menu will include "Buffalo Bites" (cauliflower chicken wings), spiral-out shoestring fries smothered in "cheeze" sauce and green onions and aioli, vegan sloppy Joes and what Glass calls the "supafresh" bowl, amassing at least 25 grams of protein via chickpeas, spinach, quinoa, carrots, celery and aioli. A post on Shambala's Facebook page says they'll offer delivery services and will maintain the food truck for festivals -- including this weekend's East Village Street Food Jam -- and special occasions. For the moment, use the Shambala phone number: (501) 286-2684. It's the second vegan establishment in the Market Hall -- Shiem Swift closed The Veg early in 2016.

For those who had been on the edge of their seats waiting for just what IHOP, which used to be the International House of Pancakes, was up to, the official "shoe" dropped on Monday. Yes, the chain is "rebranding," and yes, it'll be flipping the lower-case "p" at the end of its logo to become a lower-case "b," and yes, it's to promote its new line of seven burgers they're adding to the menu. But it's only temporary, says IHOP President Darren Rebelez, to persuade customers that there's a reason to eat something other than breakfast there. (That's in case you haven't noticed that there have been burgers on the menu. Since 1958.) And no, most IHOPs won't be "chain-ging" their signs.

To mark Arkansas' 182nd birthday on Friday, the Old State House Museum Associates group has teamed up with several Little Rock businesses, including seven restaurants (all but one of them members of the Yellow Rocket family). Except as noted, they'll donate $1 per specific item purchased to help support museum programs and services:

Grocery store K Hall & Sons Produce, 1900 Wright Ave., Little Rock, now also has a food truck, Hall Bro's 2 Go, which has a slogan of "Hallin' Good Food." It will vend a selection of Southern staples, including chicken-and-waffle bites, catfish and shrimp, as well as Philly cheese steak fries, fried Oreos, chicken wings and homemade lemonade. The "Hall bros" are Daron, David Jr. and Devin. The truck will travel to events and festivals across the state and will also be available for private catering; initially it will operate at the four-decade-old grocery store, Fridays and Saturdays after store hours (8 a.m.-6 p.m.). The store phone number is (501) 372-1513.

Rock Town Distillery will pair its eighth anniversary celebration with its grand opening in its new diggings, 1201 Main St., Little Rock, 11 a.m.-11 p.m. June 23, including periodic free tours, 11 a.m.-5 p.m.; food trucks in the parking lot; and cocktails and local craft beer in the new tasting room. That's the only place you'll be able to get the distillery's 8th Anniversary Whiskey, a 4-year-old, 100 proof, Bottled in Bond Straight Rye, which goes on sale at 11 a.m. that day. At 6:30 p.m., founder and head distiller Phil Brandon will host a seated tasting that will include that rye and Rock Town's Arkansas Bourbon Whiskey, Arkansas Four Grain Sour Mash Bourbon and Single Barrel Bourbon. Space is extremely limited; cost is $60 per person. Make reservations online at tinyurl.com/rocktown623; call (501) 907-5244.

Taziki's Mediterranean Cafe, 8200 Cantrell Road, Little Rock, will give a percentage of what it takes in, 5-9 p.m. Tuesday to Ronald McDonald House Charities of Arkansas, this month's recipient of the restaurant chain's ongoing Year of Giving largesse.

Construction on the 2,800-square-foot restaurant is set to begin in July, with a fall target opening, for the first Arkansas location of Chicken Salad Chick, an Auburn, Ala.,-based fast-casual chain built around chicken salad, 2821 Parkwood Road, in the Township Centre off Red Wolf Boulevard in Jonesboro. The chicken salad part of the menu, available at chickensaladchick.com, includes the "Dixie Chick" (which the menu bills as its "most offensive salad" and "definitely for the onion lover"), "Olivia's Old South" (with sweet pickles and egg), "Sassy Scotty" (with ranch, bacon, and shredded cheddar), "Fancy Nancy" (with Fuji apples, seedless grapes, and pecans), "Fruity Fran" (with Fuji apples, seedless grapes and pineapple), "Buffalo Barclay" ("Craving wings? This is definitely the choice for you") and Jalapeno Holly ("Whew!! The name says it all, diced jalapenos galore").

Chef Bonner Cameron of Bistro Catering and Gourmet Take Away in Bryant will serve up samples of "healthy, simple, good food," 6-8 p.m. Friday at New South Produce Cooperative, 101 Market Plaza, on the east side of North Little Rock The dishes will derive from New South produce, cheese and meats "harvested and raised by Arkansas farmers." Tickets are $25; to make reservations, call (501) 213-0179 or (479) 880-6875.

As promised, here's our (limited) list of Father's Day specials. Note that it consists only of information submitted by the establishments, and does not in any way reflect what's out there for dads on Sunday. We're pretty sure most places that open for Sunday brunch, for example, will still be open and many will offer paternal benefits. We've included phone numbers with which to make reservations or to obtain more information.

• And it's not a restaurant, but The Fresh Market is offering a Father's Day meal deal Friday-Sunday at its 176 locations, including the one in Little Rock -- Pleasant Ridge Town Center, 11525 Cantrell Road. For $29.99 you get four gourmet burgers or hot dogs with buns, smokehouse barbecue beans, coleslaw, corn, baked potato, a mini seedless watermelon and choice of desserts. Visit thefreshmarket.com.