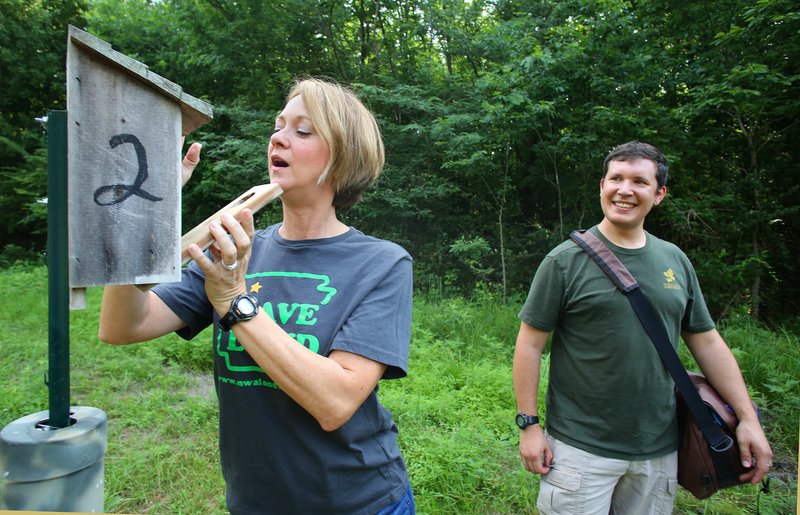 NWA Democrat-Gazette/DAVID GOTTSCHALK Terri Lane (left), executive director of the Northwest Arkansas Land Trust, and Sim Barrow, communication and outreach manager, peek in on nesting Carolina wrens in a birdhouse Friday at the Wilson Springs Preserve in Fayetteville. The Northwest Arkansas Land Trust is beginning a campaign to bring 5,000 acres under its protection in the next three years with Walton Family Foundation support.

A regional land conservation group wants to triple the area under its protection in the next three years to better protect water quality, tourism and the health and diversity of all of the region's living things.

The Northwest Arkansas Land Trust said a $675,000, three-year grant from the Walton Family Foundation will allow it to hire three more people and bring 5,000 more acres of farmland, woods, riverbanks and wetlands under its umbrella. The goal is twice the size of Devil's Den State Park in south Washington County and would add to 2,000 acres already in the trust.

More information on the Northwest Arkansas Land Trust’s conservation campaign and how to contribute is available here: www.nwalandtrust.org/3-year-5000-acres-campaign/.

"It's an ambitious and bold goal for us," said Terri Lane, trust executive director. "What we're wanting to do is just really turn up the dial and address the urgency for conservation in a growing region."

The foundation grant is solely for personnel and won't directly buy land, Lane said. The trust plans to use the money to raise almost $3 million, much of which would go into a fund allowing the group to buy land for the first time. Up to now, the trust has relied on land donations and legal agreements with landowners, called conservation easements, to preserve part or all of their land indefinitely.

"Sometimes a property is on the chopping block, so to speak," Lane said, so the raised money will let the group act quickly when a good property goes up for sale.

The new push will still depend on community support to happen, Lane noted, pointing interested landowners or other donors to the group's website, nwalandtrust.org, for more information.

The project follows a broader, yearslong effort to protect Northwest Arkansas's natural and agricultural areas as its human population grows at one of the fastest paces of any metropolitan area in the country.

The Northwest Arkansas Regional Planning Commission and local governments in 2016 crafted an Open Space Plan that lays out the locations in Benton and Washington counties most valuable to residents and other life. Lane said the three-year campaign won't be based exclusively on that plan, but the document can help pinpoint some priorities.

"Connections to green space in urban settings have a great impact on quality of life," Jeremy Pate, the Walton foundation's Home Region program officer, wrote in an email. "Preserving priority green spaces for present and future generations will enhance our sense of place and help us attract the best and brightest to the region."

The trust in general seeks out land around the state's northwest but focuses on Benton and Washington counties, where census estimates show thousands of people move every year. The land must have some kind of conservation value, whether to slow floods or clean rainwater, soak up the greenhouse gas carbon dioxide, provide wildlife and plant habitat or scenery, or grow food. Tracts range from 1 acre to several hundred, though there's no set maximum size.

Many plots are in the middle of a city, such as the 121-acre Wilson Springs Preserve next door to the Fayetteville Sam's Club near Interstate 49. The space is home to a wetland where spring-fed streams converge to form Clabber Creek. Trees and non-native species for decades deprived the streams and undergrowth of sunlight, but the trust is nearly finished returning it close to its original state.

The streams are clearer now and home to aquatic plants and more uncommon fish species. Tadpoles dart in large puddles, turning into tiny toads before the water dries. A rising number of bird, reptile and bug species live among the post oaks. Seeds of native flowers that might have been dormant for years or decades are sprouting, said Sim Barrow, the trust's communications and outreach manager.

The group offers school trips and tours of the area and plans to open it to public use within the next year or so, Lane said.

Lane said the three-year campaign will focus particularly on preserving stretches of the West Fork of the White River, which flows into the region's water supply, Beaver Lake, and has been polluted by sediment and other contaminants for years.

Jim Lukens wanted to help address that problem when he set up an easement with the land trust several years ago along several thousand feet of the river that flows through his property just east of Drake Field near south Fayetteville. He and his wife worked with other nonprofit groups to restore the stream bank's natural slope and vegetation to prevent erosion, and they wanted to make sure it stayed that way in perpetuity, Lukens said Thursday.

"We care about the environment, and I think that's our biggest motivation," he said, adding preventing erosion also has the benefit of preventing the loss of their pasture and farmland to the river with every major flood.

Now the river usually flows clear and shallow enough to walk across or fish. But Lukens notices sediment coming from stretches of the river that aren't so protected.

That shortcoming touches on another goal of the land trust's 5,000-acre project. Lane said the group puts a premium on protecting lands in continuous stretches rather than "conservation islands." With a river, for example, a piecemeal approach can foil attempts to reduce erosion.

For wildlife habitat, animals and other species, disconnected segments can mean they can't stretch out over the range they need, or even move in response to climate change, she said. Research published in the journal Science in recent years has found animal and plant species across the world are moving upward in elevation or toward the poles as global temperatures rise.

"So when you have connected protected lands, it is easier for them to make those shifts for survival," Lane said.

Lane said setting up easements or donations can be a complicated and slow legal process; usually four land additions wrap up in a given year, though the plan with the Walton grant is to double that. The trust also makes it a smooth and easy process for landowners, said Melinda Davis.

She and her husband placed conservation easements on their 200-acre family farm west of Springdale along the Illinois River. Now they, the trust and other groups are working on restoring trees and quail habitat along the banks and keeping the rest of the land as pasture.