Ecclesia College releases records on how it used state funds 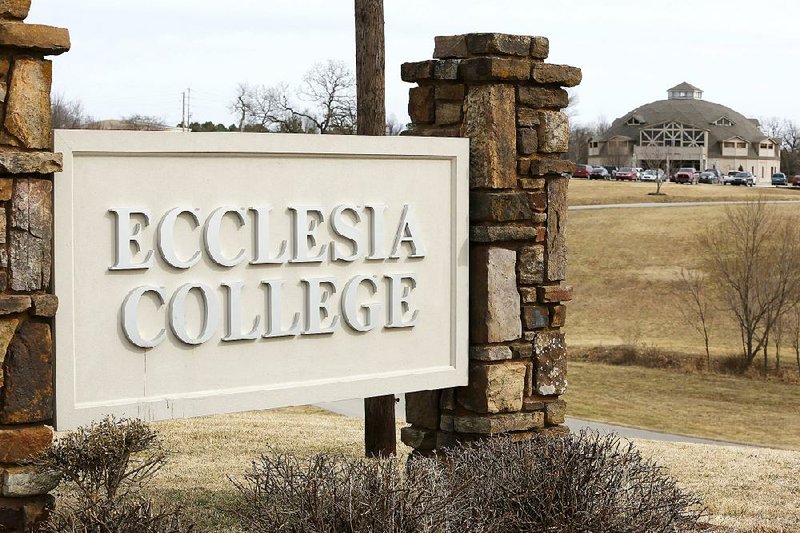 Tiny Ecclesia College in Springdale has been the recipient of $717,500 in state grant money, through 11 different state legislators. The Bible-based school has about 150 students.

FAYETTEVILLE -- An attorney for Ecclesia College on Thursday turned over a trove of records related to how state money the college received from the General Improvement Fund was used.

The document release led a judge to cancel a hearing set for Thursday in a lawsuit brought against the Springdale school.

"Ecclesia has produced certain documents that were received late this morning that are reported to be all responsive documents showing how the GIF monies obtained by endorsements from former state representatives Jon Woods or Micah Neal were distributed," Joey McCutchen, an attorney for Jim Parsons, said in email Thursday morning.

The hearing, on a motion to compel Ecclesia to release the records sought under the state Freedom of Information Act, had been set for Thursday afternoon before Washington County Circuit Judge John Threet.

Threet ruled in November that Parsons had made enough of a case for the matter to proceed in court.

Parsons and his lawyers are asking that Ecclesia be ordered to pay back all the GIF money it received. Much of the money was used to buy property, according to grant records.

Both Woods and Neal await sentencing on federal corruption charges related to Improvement Fund grants for Ecclesia and another nonprofit.

"As attorneys for Jim Parsons, we look forward to further discovery in this matter, which we intend to promptly undertake, to obtain additional information regarding the illegal exaction claim made against Ecclesia," McCutchen wrote.

A fund consisting of state tax money left unallocated at the end of each fiscal year and interest earned on state deposits. Each legislator was, in the past, given a share of the fund to be directed to a nonprofit group or government entity. The governor’s budget this year didn’t include surplus money for legislators to spend. The fund was found to be unconstitutional by the Arkansas Supreme Court in October.

The records given to McCutchen have not been made public.

The lawsuit, filed Feb. 9, 2017, contends private organizations receiving public money, engaging in activities of public interest, carrying on work intertwined with a government body or receiving grants to promote economic development are subject to the requirements of the state Freedom of Information Act.

Ecclesia, a private Christian College, had steadfastly refused to release the requested documents.

Ecclesia contended the mere receipt of state money doesn't make the private school subject to the Freedom of Information Act. Ecclesia also argued it's a church and nonprofit corporation and, therefore, entitled to constitutional protection. Members, faculty and staff of Ecclesia would be allowed to inspect books and records; otherwise, courts would have no power to intervene, according to the argument.

The lawsuit said only documents related to how public improvement fund money was used at the college is being sought. Parsons is represented by McCutchen and Chip Sexton.

Ecclesia's receipt of the money entered the spotlight after Neal, of Springdale, pleaded guilty in federal court Jan. 4, 2017, to a single fraud charge related to taking kickbacks that totaled $38,000 for helping the two entities receive grants.

The U.S. Justice Department alleged Paris paid Woods and Neal kickbacks in return for a total of $550,000 in grants from the fund from 2013 through 2014.

Shelton was convicted of using a consulting firm he owned as a way to pass along the kickbacks to Neal and Woods through fees approved by Paris.