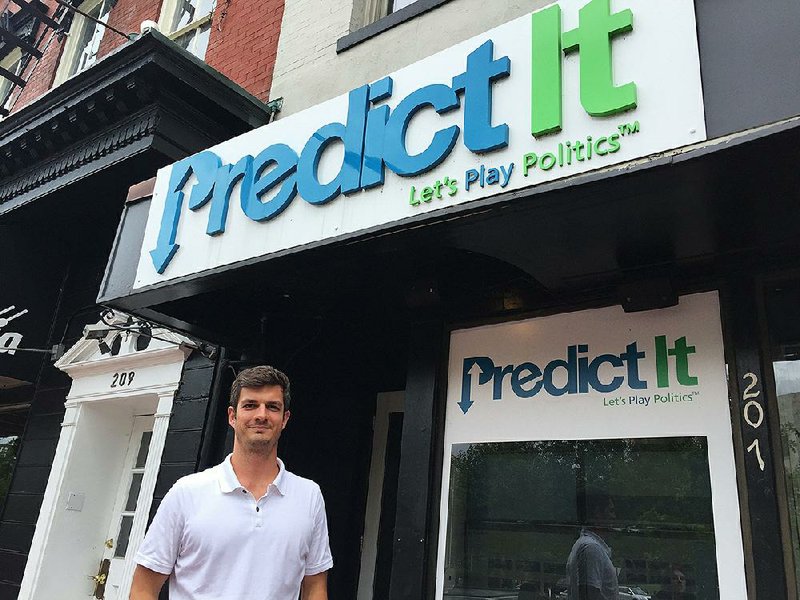 Arkansan Will Jennings works for Predict it in Washington, D.C. The company allows people to make wagers on political races and issues.

WASHINGTON -- Want to stake money on whether Donald Trump will be re-elected or impeached? There's a website that allows you to do that legally.

PredictIt refers to itself as "the Stock Market for Politics."

The organization expects to see its 1 billionth trade later this year.

Whether its referred to as investing or gambling, real dollars are at stake.

"Markets are considered to be pretty good at predicting the cost of orange juice futures or pork bellies or hurricane landfall options. The question is, 'Why not political and geopolitical events?' which is what PredictIt measures," Phillips said.

The money is a key component.

"When you have a little skin in the game, even as little as $1, it causes you to think a little bit more clearly about what you think is going to happen and try to separate that from what you want to have happen. And that's how PredictIt functions," he said.

Traders purchase either "Yes" shares or "No" shares at a price somewhere between 1 cent and 99 cents. If they win, they receive $1 per share, minus fees. If they lose, they receive nothing.

If you're convinced that the United States is going to build a wall along its southern border and that Mexico is going to pay for it by Dec. 31, you could buy a "Yes" share for 3 cents. If Mexico pays up by year's end, the shares you bought for 3 cents each will be worth $1 each. If Mexico doesn't foot the bill by the deadline, the shares would become worthless. ("No" shares had been going for 97 cents each.)

Investors can risk up to $850 on a single contract.

Currently, PredictIt has more than 300 active markets, predicting everything from Trump's number of weekly Tweets to his chances for winning the 2018 Nobel Peace Prize. ("Yes" shares on the peace prize were trading for 8 cents each Friday.)

U.S. Sen. Tom Cotton is also listed as a possible Republican presidential nominee in 2020; those "Yes" shares have been trading for 3 cents each.

Interest in PredictIt took off during the 2016 presidential campaign. In May 2017, the company hired Little Rock native Will Jennings as its head of public engagement.

PredictIt was "looking for somebody who was able to articulate what the mission was to the various stakeholders and the constituencies out there -- the traders, the academics, the researchers and ... the press," Phillips said.

Jennings, a former White House staff member, campaign worker and Capitol Hill press secretary, was the one they selected.

Among other things, Jennings serves on the questions committee, helping to select the topics that are traded.

"Will's been central to the whole process and really has taken the site to a new level," Phillips said.

"Polling has become ... increasingly difficult and expensive and somewhat unreliable in certain circumstances," he said. "There's a constant search for other ways of figuring out what people think is going to happen as opposed to what they want to have happen."

Robin Hanson, an associate professor of economics at George Mason University, said participants in prediction markets tend to be better informed than the general population.

"People in a poll are not trying very hard because their incentives are very weak. In these markets, people have a much stronger incentive to be right, and they use that incentive not just to give you a better answer but, more importantly, to step out if they don't think they are really well-informed," he said.

Participants in markets do their homework, Phillips said.

PredictIt isn't the first outfit that has tried to monetize election predictions. Intrade, a previous online prediction exchange, was sued by the Commodity Futures Trading Commission shortly after the 2012 presidential election.

The agency alleged the unregulated trading was illegal.

Rather than risking the Commodity Futures Trading Commission's wrath, Phillips sought to work within the system.

After discovering that the commission had previously allowed the University of Iowa to operate a small-scale future predictions market, he teamed up with Victoria University of Wellington , to launch PredictIt.

The nonprofit New Zealand-based school sought a "No-Action Letter" giving it permission to proceed with a "small-scale, not-for-profit, online market" that would be operated "for educational purposes."

In October 2014, shortly before the midterm elections, the letter was received.

Visitors to PredictIt's website are warned the predictions market is "unregulated, experimental, and being operated for academic purposes."

Professors from a number of universities are following the project.

The dollars and the data are both important, Phillips said.

"The primary purpose is research. But the 'skin in the game' piece of it is essential," he said. "If you do the market and there's nothing really of value that you get, you've ripped out the heart of why markets are so accurate."

It's crucial to craft the questions so that the correct answers are black and white with no shades of gray.

"We have a lot of lawyers that are predictors so language matters," Jennings said.

PredictIt has offices on the edge of Capitol Hill, across the street from the Library of Congress.

"I love the work. It comes with the same challenges as most startups, but it's been a unique education and one that I've thoroughly enjoyed," Jennings said.

The job "has a similar appeal as political campaigns did for me. It's hectic at times, but I feel like I am building something important, and I'm just trying to ride the momentum," he said.