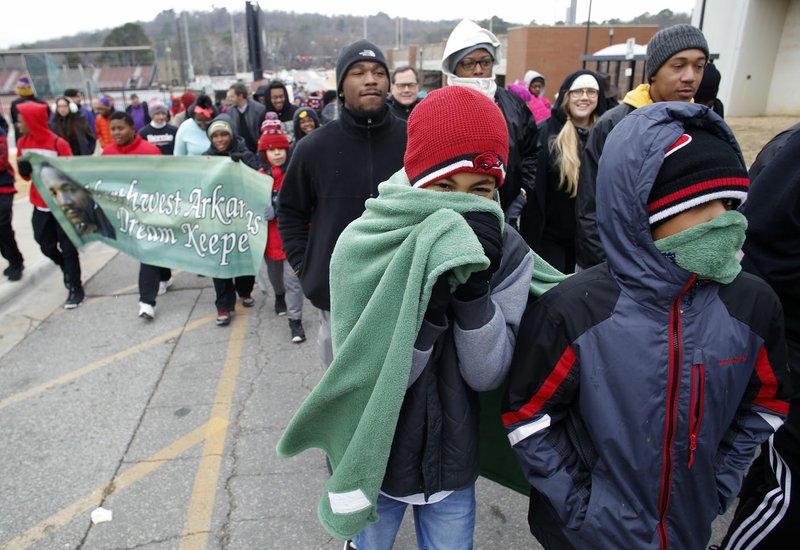 The spirit of Dr. Martin Luther King Jr. lives on through youth participation and diversity, organizers in Northwest Arkansas said Monday, nearly 50 years after the death of the iconic civil rights leader.

“Injustice anywhere is a threat to justice everywhere.”

“Life’s most persistent and urgent question is, ‘What are you doing for others?’”

"Springdale embodies the principles of Dr. King," Gachuzo-Colin said. "Your character determines what you can do in Springdale, not your color. This (event) is to celebrate Springdale."

The passage of Act 561 of 2017 took years of lobbying in the Arkansas Legislature and failed numerous times before it was successful in separating the observance of both holidays. Arkansas now commemorates Lee on the second Saturday of October, near the anniversary of his death.

Marchers in Springdale gathered briefly at Luther George-Grove Street Park before walking to The Jones Center to hear speeches and songs, and watch Hispanic and Marshallese dancers.

Tania Mahony-Vazquez brought her two children, ages 8 and 4, to see the celebration and diversity in Springdale.

"I hope this really shapes them," Mahony-Vazquez said.

She attended past King holiday events in Fayetteville, but Springdale fits King's ideals because it is so diverse, she said.

Mahony-Vazquez said it surprised her it took Springdale so long to have its own celebration. But, the city is changing, she said. Young people in Springdale are bringing about social and political changes, she said. This year's event is the first of many to come, volunteers and organizers said.

Hundreds marched in Fayetteville from Martin Luther King Jr. Boulevard and Razorback Road to the University of Arkansas, Fayetteville student union. Aside from the 34-degree temperature, Gary Winters with the Masonic Hill City Lodge No. 347 said he could feel the chilling effects of today's national political climate.

April 4 will mark the 50th anniversary of King's assassination. King's message to judge people based on their merits and character couldn't be more timely, Winters said.

"He couldn't make it any simpler than that," he said. "It gets convoluted by people putting a spin on it."

"Our fight to change the injustice in this system cannot begin in November 2018 -- it has to begin now," she said. "It has to begin now with a commitment to inspire and motivate every person who can to get out there and vote."

Francisco Soza, 23, of Belize came to the university to study mechanical engineering. He said he's looking at politics in the United States with fresh eyes, but the discrepancy between the rich and poor serves as a common international thread. King's message resonates across global borders, Soza said.

"He wanted peace, he wanted equality," Soza said. "I'm aware of what he was trying to do and I understand that."

The group diligently made its way indoors for music, speeches and hot chocolate. Yvette Murphy-Erby, the university's top diversity officer, recognized King's courage and audacity to lead, starting as a young man in his 20s.

People commemorated King's memory across Arkansas and the nation Monday with speeches about political divisiveness, unity, racism, the path toward equality and continued progress for minorities, as well as the lessons that will be handed down to coming generations.

"We've decided to be united" was the theme of the King Day ceremony Monday on the steps of the Arkansas capitol. It followed more than two miles of the 35th annual parade that featured marching bands and community groups celebrating King's life and wisdom.

Dale Charles, president of the state conference of the NAACP, called for applying the lessons of King to today in opposing what he called offensive language coming from President Donald Trump.

Floyd, of Cross Church, noted increased widened racial divides in the country following protests over the shooting of Michael Brown by Ferguson, Mo., police in August 2014.

"It has been like a fire that has received a mighty wind," he said.

In an animated speech punctuated by numerous cheers and standing ovations, Floyd said conversations are necessary to fight racism, but argued healing would not occur without people first surrendering to God. He called repeatedly for an effort toward unity in the country. 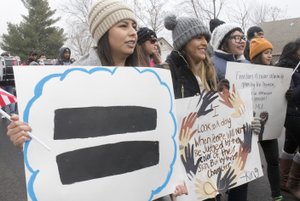 Photo by Charlie Kaijo
Barbara Martinez (from left), Jessica Marez and Jessica Escobar, all of Springdale, hold signs and march during an MLK Day rally Monday that started at Parsons Stadium in Springdale. The NWA Dr. Martin Luther King, Jr. Council presented the 22nd annual Celebration of Dr. Martin Luther King, Jr. Holiday. This year’s theme was “MLK50 Forward: Together We Win with Love for Humanity.” 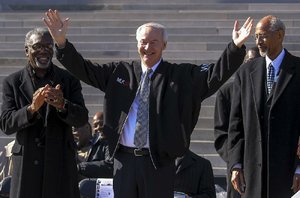 Photo by Benjamin Krain
Gov. Asa Hutchinson shows his appreciation for a Martin Luther King Jr. jacket given to him by Arkansas MLK50 Faith-based Coalition leaders Jessie Turner (left) and Dale Charles (right) during an Inaugural MLK Holiday Exclusive Ceremony at the state Capitol on Monday. 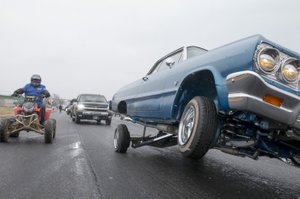