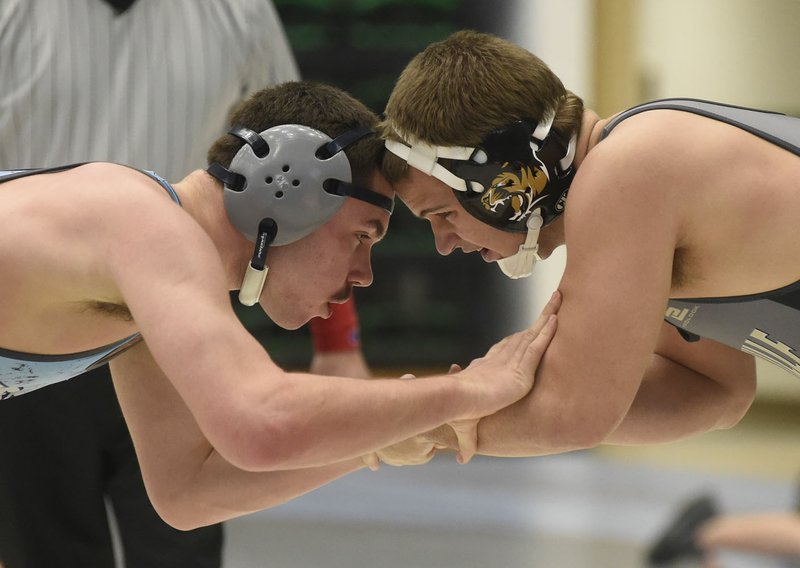 NWA Democrat-Gazette/MICHAEL WOODS @NWAMICHAELW Springdale Har-Ber's Ben Fears (at left) has found success in high school wrestling despite the challenges of being diagnosed with autism. The senior will be a Class 6A-7A state title contender in the 182-pound weight class.

The senior knew he was different when he was young, but wasn't sure how or why. He was diagnosed with autism spectrum disorder prior at the start of seventh grade.

Notable Currently has a record of 19-2 with one loss via an injury default while bumping up to the 182-pound weight class this season. … Diagnosed with Autism Spectrum Disorder during summer prior to seventh grade. … Finished third at the Class 6A-7A state tournament last season at 170. … Plays the baritone in the Wildcat Marching Band. … Tried lots of different sports, including swimming but has found success in wrestling. … Hobbies include video gaming. … Has 3.9 grade-point average and scored a 26 on the ACT. … Will attend the University of Arkansas-Fayetteville and major in engineering.

Autism spectrum disorder refers to a broad range of conditions characterized by challenges with social skills, repetitive behaviors, speech and nonverbal communication, as well as by unique strengths and differences. It is now known that there are many types, caused by a combination of genetic and environmental influences.

He started wrestling with the youth club in Springdale not long after he was diagnosed, stuck with it and is now flourishing in the sport.

The 5-foot-10, 182-pounder isn't the most coordinated on the mat, but he's combined strength with an analytical approach to find success. Fears finished third in the 170-pound weight class at the Class 6A-7A State Wrestling Tournament as a junior. He's bumped up a weight class to 182 this year and is off to a great start this season.

Nika West, who is now the wrestling coach at Fayetteville, was at Har-Ber during Fears' freshman and sophomore seasons and has seen him progress.

West pointed to one particular match when he was a sophomore where Fears surprised his opponent.

"Ben was in front of the table and he was having trouble snapping his headgear," West said. "His opponent ended up helping him get it snapped and the kid looked at his friends on the bench and kinda laughed and pointed at them. Ben pinned him in 30 seconds. He looks like he could be a pushover, but he flips the switch on the mat."

Fears has surprised West, too.

"He's find a level of success now that surpasses where I thought he would go when I had him as a freshman," West said.

Har-Ber coach Eric Nolan, in his second season with Fears, believes his relationship with him has improved like it has with all the Wildcat wrestlers. But he's not treated Fears any differently because of his disorder.

"I've had some kids in the past with similar issues," Nolan said. "I've had a lot of different personalities on my teams over the 11 or 12 years I've been coaching. I think the more that I've coached the better I've been able to figure out ways to handle different kids. Ben's no different than any other kid in that respect."

But Nolan acknowledged he and Fears communicate better this year.

"Maybe it's from his success last year, but I've seen more smiles on his face in practice," Nolan said. "I think he takes pride in coming into practice and doing the right thing. I can tell he's focused, and through our conversations, I can tell he's genuinely concerned about doing a good job and being a good team guy."

Fears' attitude and work ethic has made him a leader on this year's team, which hopes to contend for a state title as well.

"I've always had a lot of respect for guys like him who don't have to talk about how good they are," Nolan said. "Ben's the type of guy who leads by example and to me that's more important than the vocal leader. Before you can even be a vocal leader you have to have respect of your teammates and that because of your actions and I know that's an area Ben is real strong in."

"It's taught him to be a part of a team and you have to learn to handle your emotions," Melissa Fears said. "It's taught him communication skills. Several people have commented that he's grown so much in the past year in interacting with people.

Fears saw a counselor for six to eight months following his diagnosis to help him modify some behavior. He still takes anti-anxiety medication, which helps him function better.

"My biggest problem is how I feel in a social aspect," Fears said. "The medication helps me be on a more stable level. It was like 'this is how it's supposed to be.' I could understand how everything was supposed to go."

But now Fears' opponents are the ones that should be anxious.