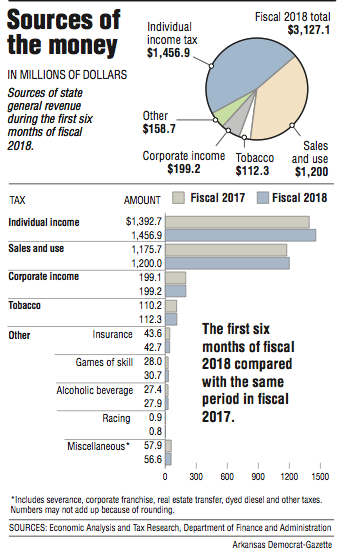 Bolstered by increased collection of individual income taxes and sales and use taxes, state general revenue in December increased by nearly 10 percent over the same month a year ago to a record-setting $589.4 million.

Last month's tax collections increased by $52.6 million, or 9.8 percent, over December 2016's revenue and exceeded the state's Dec. 1 forecast by $21.4 million, or 3.8 percent, the state Department of Finance and Administration reported Wednesday in its monthly revenue report.

December's collections are a record for the sixth month of the fiscal year, exceeding the previous record of $542.2 million in December 2014, said Whitney McLaughlin, a tax analyst for the finance department. Fiscal 2018 started July 1.

Sales and use taxes and individual income taxes are by far the largest sources of general revenue.

The sales taxes remitted last month were collected by retailers and businesses largely in November, so the report reflects a strong start to the holiday buying season, said finance department Director Larry Walther.

"This report starts 2018 with a very optimistic ring and sets the stage for the upcoming fiscal session," the Republican governor said in a written statement.

"Most encouraging to me was the sales tax collections, which exceeded projections and demonstrate a great deal of consumer confidence. This is all good news, but I am mindful that some taxpayers paid their income taxes early and so we will continue to be conservative in our approach to the budget, which will be presented to the General Assembly in detail next week," Hutchinson said.

Hutchinson on Tuesday will present his proposed fiscal 2019 general-revenue budget on the first day of the Joint Budget Committee's hearings in advance of the Legislature's fiscal session starting Feb. 12. Officials from the state departments of Correction, Community Correction, Education, Health, Human Services and Higher Education are to appear before the committee next Tuesday-Thursday. The fiscal session is for annual appropriations.

A month ago, the governor said that "as an additional conservative tool to managing the budget, we will present to the General Assembly a [fiscal 2019] budget that will reduce spending" and provide "a sufficient cushion in the event there is any unanticipated economic news that changes the revenue picture next year." He has not released details.

Sen. Larry Teague, D-Nashville, who is a co-chairman of the Joint Budget Committee, said Wednesday that he's encouraged about tax collections, particularly in light of the strong sales-tax collections last month.

"It was bright all the way around. It made me feel better about the forecast and everything," said Teague.

On Dec. 1, the finance department trimmed by $22.1 million, to $183 million, its projection for the increase in general-revenue collections in fiscal 2018 compared with fiscal 2017. However, despite that reduction, the department didn't further cut the budget of $5.45 billion, which it sliced by $43 million in May. The fiscal 2018 budget is $130.1 million more than last fiscal year's budget, with most of the increase going to the state Department of Human Services, according to the finance department.

That budget cut came immediately after another one for fiscal 2017.

In late April, Hutchinson announced a $70 million cut in the fiscal 2017 budget because of lagging sales and use tax and corporate income tax collections. But after collections rebounded, he restored $60 million to that budget in June.

Tax refunds and some special government expenditures, such as court-mandated desegregation payments, come off the top of total general revenue, leaving a net amount that state agencies are allowed to spend.

For the first six months of the fiscal year, the net showed an increase of $74.5 million, or 2.8 percent, from the same period in fiscal 2017 and totaled $2.69 billion. Net revenue exceeded the revised forecast by $23.7 million, or 0.9 percent.

The revenue report for December showed:

Withholdings are the largest category of individual income tax collections. They increased by $19.2 million from last year, to $217.7 million.

Estimated payments is another category of individual income tax collections. They increased by $10 million from the December 2016 collection, to $38.2 million.

The collections reflect strong retail and business sales tax collections, "but motor vehicles were weak and below this time last year," Walther said.

The retail part of sales-tax collection increased by 7 percent last month from a year ago, Shelnutt said.

"It was what we were looking for," for sales to pick up and income to remain strong, he said.

"Everything that we have seen reported in the news, that sales have been extremely strong this December ... we're hoping that will carry forward into January," he said.