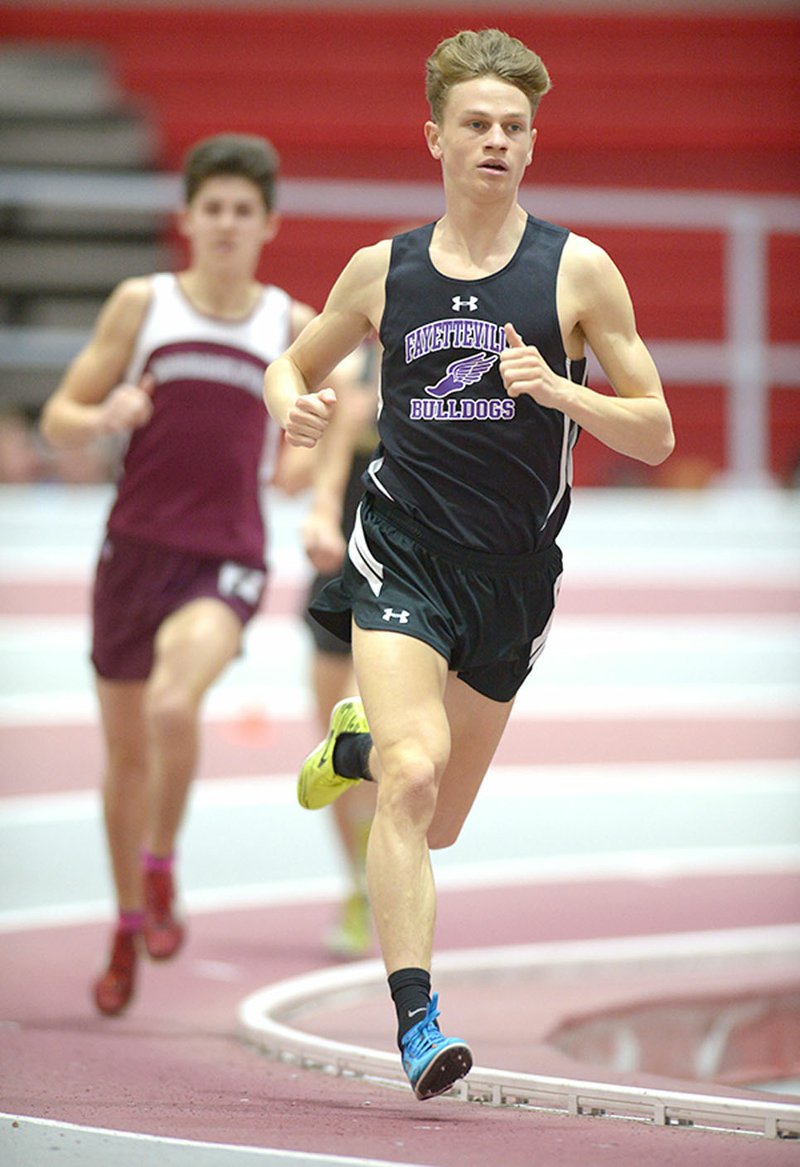 NWA Democrat-Gazette/ANDY SHUPE Camren Fischer of Fayetteville leads the field in the 1,600 meters Saturday during the State Indoor Track and Field Meet at the Randal Tyson Track Center in Fayetteville.

FAYETTEVILLE -- Camren Fischer could hear Alex Zangara's footsteps behind him, and that was enough motivation to run a little faster and eventually set a state record.

Fischer's performance came after a number of state records were threatened but remained intact. When he could no longer hear Zangara, the Morrilton runner who finished second in 4:20.55, it was roar of the crowd that helped him through the last two laps.

Click this link to see the full meet results.

"I just tried to stay focused on my race, but I did see a lot of people coming close," said Fischer, who also won the 3,200 in 9:32.86. "It was a little nerve-wracking, but I just tried to stay mentally calm and cool before my race. I think that helped.

"I could hear (Zangara) behind me, and that was a big factor. It kind of pushed me a little more. I didn't hear the crowd a lot, but I knew they got loud. I could hear the guy yelling out to help me out, and I think that helped me out."

The other record performance came in the girls 4x400 relay, where Bentonville's team of Sydney Suggs, Baylee Barganier, Lainey Quandt and Trinity Walker turned it a time of 4:02.28. That broke the previous record of 4:02.30 set by Springdale Har-Ber last year.

But it wasn't enough for the Lady Tigers to surpass Rogers High for the team title. The Lady Mounties -- who opened the meet with their 4x800 relay team of Ali Nachtigal, Evelyn Cardona, Olivia Breazeale and Emily Efurd missing a state record by .01 second -- finished the meet with another close call, scoring 94 points to Bentonville's 93.33.

Rogers were helped in distance events as Nachtigal and Anna Jeffcoat won the 3,200 and 1,600, respectively, while Hannah Martin won the high jump (5-foot-4) for the second straight year.

"We had a meeting with the girls earlier this week about points," Rogers coach Becky Efurd said. "It's not about their times; it was all about points. We told each girl how many points they needed to score. If somebody didn't get their points, somebody else would have to step up and make them up.

"We came up short in five events where we didn't score, so we have something to work on. But we scored in other events, and I couldn't be more proud."

On the boys' side, Bentonville opened the meet with a close win in the 4x800 relay, where the team of Zerai Belai, Nicholas Brophy, Garrett Clifford and Orion O'Connor finished in 8:19.10 to 8:18.14 for Lake Hamilton. The Tigers built momentum from there and went on to score 94 points to win the team title, while Bentonville West edged Har-Ber for second by a 68-64 margin.

Bentonville picked up a double victory from Devin Dougherty, who took the 200 in 22.30 seconds and the 400 in 48.35. The Tigers also picked up a one-two finish from Hayden Wiatrek and Bryant Parlin in the shot put.

"We had a really, really great day," Bentonville coach Mike Power said. "I think we really wanted this more than anything. They wanted to win it, and we're now looking for the outdoor season and hopefully win it like we did last year."

The Lady Blackhawks finished with 86 points, while Crossett finished second with 67 and Pocahontas was a distant third with 39.

Heber Springs captured the boys title as the Panthers accumulated 56 points to 45.5 for second-place Ashdown. Pea Ridge was a close third, only one-half point behind Ashdown.

Heber Springs had the only boys state-record performance as JaQuan Dunaway won the 200 in 22.61, breaking the previous mark of 22.67 set by Sydney Walker of Prairie Grove in 2015.