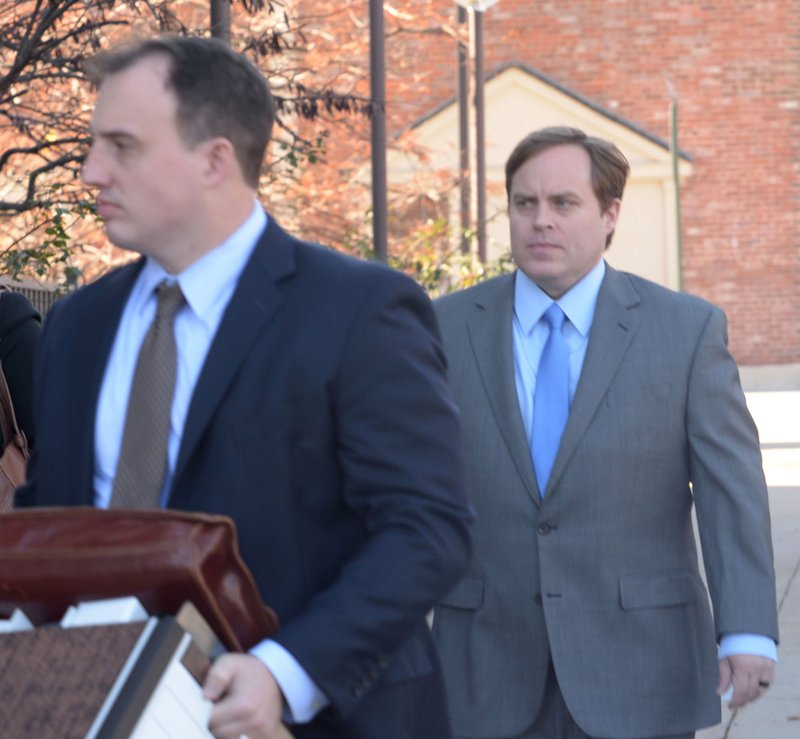 FAYETTEVILLE -- The government's own attorneys said Thursday they don't believe the reason given by their chief investigator for why he wiped the memory of a computer used to gather evidence in the corruption case of former state Sen. Jon Woods.

U.S. District Judge Timothy Brooks will issue an order at a later date on whether to dismiss the kickback case over the destroyed evidence, he said after a hearing Thursday on the defense motion.

Brooks asked government attorneys during the hearing if they found it credible FBI special agent Robert Cessario wiped the hard drive because he had used the laptop to download personal medical records he wanted to keep private.

"No, your honor," Assistant U.S. Attorney Aaron Jennen replied. "That reason sounds like burning down a house because you don't like the drapes."

Woods of Springdale; Oren Paris III, president of Ecclesia College in Springdale; and consultant Randell G. Shelton Jr., formerly of Alma, are accused in a federal indictment of participating in a kickback scheme involving state grants. The Justice Department alleges Paris paid Woods and then-state Rep. Micah Neal of Springdale kickbacks in return for $550,000 in grants from them to his college from 2013 through 2014.

Neal pleaded guilty to a conspiracy count on Jan. 4, 2017 for his role.

Neal made secret audio recordings from March to October of 2016, hoping to find more evidence and mitigate the sentence he expects to receive, according to his testimony in an earlier hearing. Neal did this without its encouragement nor participation, according to government prosecutors, but he informed them he was doing it.

Defense attorneys for Woods and his two co-defendants asked Brooks to dismiss the case last year, arguing they never received a complete copy of Neal's recordings. They received 39 files originally and discovered gaps in the dates between recordings. They also found text message between Neal, his attorney and Cessario that referred to recordings that weren't among the ones the defense team had received.

Further investigation found 79 more recordings on a computer at the law office of Neal's attorney, Shane Wilkerson of Bentonville, that were given to the defense.

The discovery of the gap resulted in the U.S. Attorney's Office ordering Cessario to turn in the laptop for inspection. That inspection found Cessario had the hard drive erased.

An investigation begun Feb. 7 found yet another recording neither the government nor the defense had ever heard. In all, there are 119 audio files of Neal's, according to testimony Thursday.

No clear account of whether Cessario wiped other records from the hard drive can ever be pieced together now, attorney Travis Story of Fayetteville said on behalf of the defense in closing arguments Thursday. Story represents Paris.

Nothing less but dismissal will do, other defense counsel argued.

"If you don't find bad faith in this, you are setting a precedent that agents can do stuff like this and get away with it," Shelley Koehler of Fayetteville, attorney for Shelton, told Brooks in her closing statement.

"I would question anything Bob Cessario had a finger on," he told Brooks.

In a related matter, defense attorney Gregory Payne, who represents Paris, acknowledged to the court he overstepped his bounds when he released a letter in a Dec. 18 court filing that made Cessario's actions public.

The government argued the letter was protected by a court-ordered seal. Payne disagreed, but should have taken the matter to Brooks before making the letter public, he told the judge. Brooks ordered the hearing Thursday on whether Payne should be punished. Brooks let the matter drop after an admonishment of Payne from the bench and Payne's assurance he wouldn't overstep those bounds again.

The case involves grants from the state General Improvement Fund, which is controlled by legislators. The state Supreme Court declared the method of distribution unconstitutional in a ruling Oct. 5. The Justice Department alleges Paris paid Woods and Neal kickbacks in return for $550,000 in grants from those two legislators to his college from 2013 through 2014.Shelton is accused of using a consulting firm he owned as a way to pass along the kickbacks to Neal and Woods through consulting fees approved by Paris.

Neal, a Republican, pleaded guilty to one count of conspiracy to commit fraud, admitting that he took two kickbacks totaling $38,000 in exchange for directing improvement fund grants to two nonprofits. He has not been sentenced.

The indictment doesn't give a total figure of what Woods, a Springdale Republican, is accused of receiving in kickbacks because portions of it were reportedly paid in cash.

All three defendants have entered not guilty pleas. They face up to 20 years in prison on the fraud and conspiracy charges, if convicted. Woods faces an additional 10 years on the money laundering charge, if convicted.