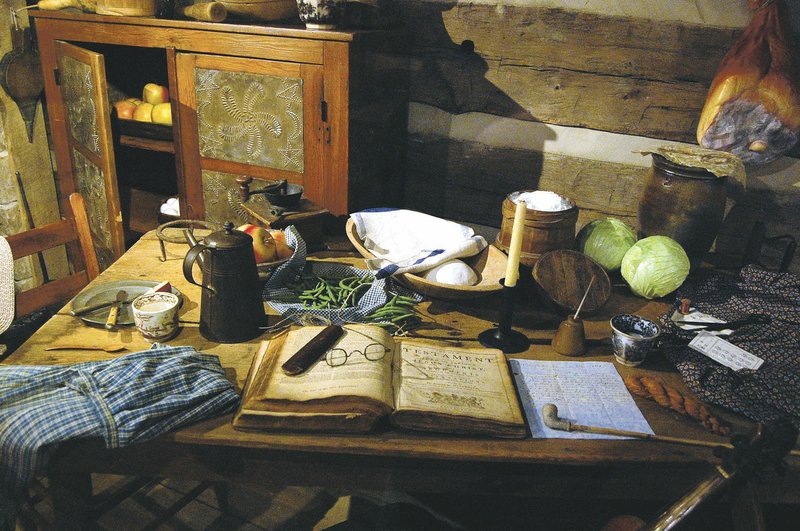 Courtesy Photo The Shiloh Museum of Ozark History used its own collections plus artifacts borrowed and purchased to fill up its renovated exhibit hall.

In 2018, the Shiloh Museum of Ozark History partied like it was 1968. But it took a lot of hard work to get there.

The museum in downtown Springdale celebrated its 50th birthday on Sept. 7, and to mark the occasion, the staff spent five years planning and then completely revamping the exhibit hall themselves on a budget that would have been tiny in 1968 -- just $83,000.

Celebrating 50 wasn’t the only excitement for the Shiloh Museum in 2018. Thirteen years of effort came to fruition in the summer, when the Shiloh Meeting Hall opened.

“The hall is the oldest standing public building in Northwest Arkansas,” says Allyn Lord, director of the museum. “The local Odd Fellows Lodge donated the 1871 building and its contents to the city of Springdale — and thereby the Shiloh Museum — in 2005, and we opened the first floor as meeting space on June 30.

“The second floor will serve as an exhibit hall, featuring the histories of many of the churches and organizations that occupied the building over its 147 years,” she adds. “We hope to begin work on that space in 2019 and open it to the public no later than 2021, when the building will celebrate its sesquicentennial.”

In the meantime, the hall is available for rent by calling Walter Gallagher at 750-1863.

"We had a number of major projects on our to-do list and nowhere near the funding we'd need to get them done," the museum's director, Allyn Lord, remembers. "There was only one project that, instead of hiring a contractor to do, we could do using our own expertise, time and skills -- and that was an entire exhibit hall renovation. Many of our exhibits were more than 20 years old and desperately needed a makeover. We knew that it might not be as slick and snazzy as a professional museum exhibit firm would create, but we figured that we didn't really need slick and snazzy, just excellent -- and we knew we had the skills to do that. And we knew we could do it for much less than one of those out-of-state companies; in fact, it turns out we've done it at about one-16th the cost.

"We're currently finishing up work on the last of five 'core' exhibits. This one will cover the Arkansas Ozarks from the earliest geological times through the arrival of Paleo-Indians about 12,000 years before the present."

Along the way, "every wall in the exhibit hall has either been moved, remodeled, or newly created, with the exception of the log walls of the 1840s Lewis-Reed cabin," she adds.

Lord says she and the staff were all committed to one thing -- "staying true to our mission, telling the stories of the everyday men, women and children who make history every day. We wanted to be inclusive, making sure that the stories were broad enough to give everyone a voice, as well as making the stories accessible. That also meant presenting the stories in both English and Spanish -- as far as we know, we're the only museum in Arkansas with bilingual core exhibits. Accessibility was also important in other ways, such as interactive elements, large print, good lighting, wide circulation routes, and label and object placement at a height for children and those in wheelchairs.

"Like many small museums, the Shiloh Museum started with dreams, one part-time paid employee, and a small collection, in a small building," Lord muses. "But like many mid-sized museums, the Shiloh Museum has grown because of the hundreds of people who had a bigger vision and were generous with their time, energy and money. We've grown because there were dreams of serving more people, telling more stories, and becoming a destination for our region and tourists alike. We've grown because the city of Springdale embraces our mission, cares for its citizens' quality of life, and understands the value of community-centered and lifelong learning. We've grown because we've had wise boards of trustees who care for and steward the museum's financial assets and policies."

While the parties -- two of them, a "50th Anniversary Frolic" and the "50th Anniversary Family Celebration" -- are over, two of the three exhibits created to celebrate remain open into 2019: "Fifty from Fifty" features an artifact acquired during each of the Shiloh Museum's 50 years and runs through Jan. 12. "Selected," an exhibit of objects from the permanent collection selected by guest curators from the Northwest Arkansas community, continues through April 13.