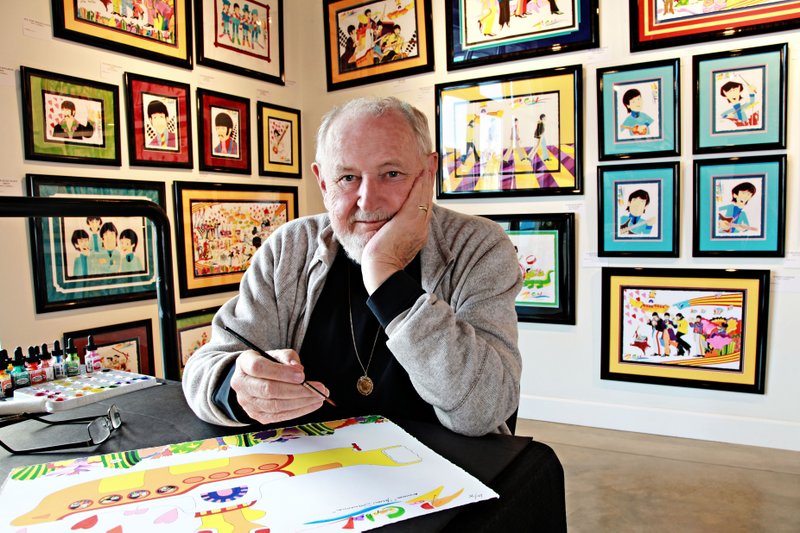 Photo Courtesy Nick Follger Legendary artist and animator Ron Campbell makes a rare public appearance in Bentonville Dec. 14-16 to display and share original paintings based on his 50-year career in cartoons, including The Beatles' "Yellow Submarine," celebrating its 50th anniversary this year. Paintings are for sale and range from roughly $300 to $5,000.

When animator Ron Campbell put his pencil down -- after drawing the very last line of dialog, in the last scene of the finale TV movie for the bizarre and twisted early 2000s cartoon "Ed, Edd n Eddy" -- the legendary artist somehow knew his career in television animation had come to an end. Serendipitously, Campbell's chosen retirement lined up to be exactly 50 years and one month after his very first professional animation job -- drawing a dying centipede over and over for a bug spray commercial. The cartoon in question would also happen to be the last major animated series to use traditional animation techniques before the world turned wholly to computers.

"My business changed once I retired, [but] there was a long segue period. Indeed, the first time I saw computer-generated animation was [around] 1968," the animator recalls. "It was a very crude system, but the effect was incredible. It was the point of view of an airplane cockpit of a plane landing on an aircraft carrier, and it was designed to explain the process to a student pilot. It was extraordinary -- could never have been done by hand. And all through those years, there was gradual improvement ... it's unbelievable the effects they can get [now]."

COST — Free to attend; all art is available for sale

FYI — The only place to procure Campbell’s work is in person; none of his pieces are available online.

Campbell pauses and adds, thoughtfully, "Though I am inclined to the view, and it's just a personal thing, that computer-generated animation for characters has an edge of coldness to it that hand animation does not have. But so what? It's still marvelous."

And where did Campbell earn his authority on the matter? What animations did he have a hand in over those five decades that could have provoked a deeper warmth or affection than the computer creations on our screens today? See if any of these shows ring a bell: "Beetle Bailey," "Sesame Street," "Scooby Doo Where are You?," "Big Blue Marble," "The Flintstones," "Smurfs," "Teenage Mutant Ninja Turtles," "Winnie The Pooh," "Duck Tails," "Rugrats," "Rocket Power," "Aagh! Real Monsters!" to name only a few... Oh, and a little Beatles film called "Yellow Submarine."

"I was often the person who made the film, not created the film," Campbell explains. While he may not have contributed to the creation of the characters' personalities, Campbell's production, direction, animation, or storyboard work certainly affected the portrayals millions would come to adore. "So, you can't blame me and you can't praise me for the wonderful things that were involved in [many of] the wonderful shows," he says cheekily.

Looking back on his career, Campbell warmly discloses how fortunate he was to realize his childhood dream, while working on projects he cherished. "I remember clearly saying to myself, 'I would pay them to let me do this,'" he says of that first tedious job drawing an untold number of centipede legs. But his proudest achievement was, of course, his own show, "Big Blue Marble," produced by his Hollywood studio, Ron Campbell Films Inc.

"We traveled to many countries and showed how children in other countries live, and the animated films are based on the country's culture and fairy tales," he says of the series that showed all over the world. "It won a Peabody Award -- which I'm very proud of -- which is a very unusual award for a children's program to win."

One lament Campbell does share is over the demise of Saturday morning cartoons -- "a limited period that's just for children" -- a casualty of the streaming climate in which today's little ones are growing up. In his travels, Campbell says a consistent story shared with him from hundreds and hundreds of audience members involves their delight in memories of rushing down the stairs early Saturday morning, grabbing the cereal, and sitting down for cartoon time -- their time.

"And the people telling me sometimes reveal that their childhood was a catastrophe. [But] no matter how miserable their childhood might have been, or how beautiful their childhood might have been, the one experience they all shared and all remember with pleasure was Saturday morning watching television cartoons," Campbell says fondly. "In a large measure, that nostalgia and that experience, that moment of wonder, is part of the reason why people like to buy my paintings. Because it captures, in some way, something they can hold that reminds them of those wonderful moments."

Print Headline: A Picture's Worth