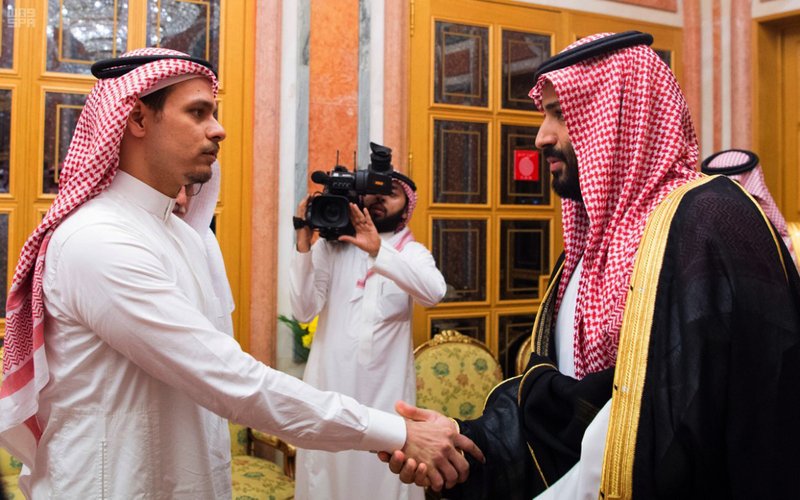 In this photo released by the Saudi Press Agency, Saudi Crown Prince Mohammed bin Salman, right, shakes hands with Salah Khashoggi, a son of Jamal Khashoggi, in Riyadh, Saudi Arabia, on Oct. 23, 2018. The meeting came just days after Saudi Arabia acknowledged that Jamal Khashoggi was killed at the Saudi consulate in Istanbul, Turkey, in what they claimed was a &quot;fistfight.&quot; (Saudi Press Agency via AP)

JERUSALEM -- An Israeli company known for its sophisticated phone-surveillance technology on Monday rejected accusations that its snooping software helped lead to the killing of Saudi journalist Jamal Khashoggi.

The NSO Group in the past has faced similar claims that its products were used to stifle dissent in other countries. But the alleged connection to the Khashoggi killing is the most high-profile case to date, drawing new attention to the secretive company's business practices and the Israeli government's oversight of private defense contractors.

The latest case against NSO was outlined Sunday in a lawsuit filed in an Israeli court by a Saudi dissident. In the suit, Omar Abdulaziz, a critic of the Saudi royals who lives in exile in Canada, said he was friends with Khashoggi and that their communications were monitored by the Saudis using NSO software.

Abdulaziz also believes that his cooperation with Khashoggi was a "crucial factor" in the killing of the U.S.-based columnist. The men had been working on a project to rein in pro-monarchy Saudi trolls.

Alaa Mahajna, a lawyer for the Saudi dissident, said the suit alleges that NSO sells technology to "dictatorship states" like Saudi Arabia to spy on journalists and human-rights activists.

"The lawsuit proves that by using this technology, Saudi Arabia succeeded to follow after Jamal Khashoggi and his interactions with Omar Abdulaziz," he said.

The lawsuit says the Internet watchdog Citizen Lab notified Abdulaziz that his phone was compromised. The suit cites news reports and other sources claiming that NSO sold Saudi Arabia the technology in 2017 for $55 million. Abdulaziz's suit asks for damages and an order preventing NSO from selling its technology to Saudi Arabia.

NSO issued a statement calling the lawsuit "completely unfounded." It said the suit was based on inaccurate "press clippings" and showed "no evidence that the company's technology was used."

"We take an extremely scrupulous approach to the licensing of our products -- which are only provided after a full vetting and licensing by the Israeli government," it said.

Israel's Defense Ministry said it is "meticulous" in granting export licenses, but it declined to comment on its policies, citing security concerns.

NSO's smartphone-hacking technology has emerged as a favorite for authorities seeking to crush dissent across the Middle East and Latin America.

The Israeli firm's technology is part of a larger family of malware that allows spies to take remote control of phones from anywhere in the world -- turning the devices in targets' pockets into powerful surveillance tools.

The company said its products "are licensed for the sole use of providing governments and law enforcement agencies the ability to lawfully fight terrorism and crime in the modern age."

Founded by Israeli entrepreneurs, NSO was sold in 2014 to the U.S. private-equity firm Francisco Partners for $130 million. Today, it employs about 600 people and is believed to be valued at more than $1 billion.

The company rarely speaks to the media, does not publicly identify its customers and does not even have a website.

But a person familiar with NSO said the company keeps tight oversight over its sales. He said the company will not do business with 21 countries. Those include Russia, China and Turkey, as well as many others blocked by the Defense Ministry.

The person also said NSO has an "ethics committee" that includes human-rights experts and former U.S. officials who must vet every sale. He said the committee has blocked more than $100 million in deals over the past three years, though he declined to elaborate. He spoke on condition of anonymity because he was discussing inside corporate information.

The person familiar with NSO said the company has a number of safeguards to prevent misuse of its products.

For instance, it can limit the countries in which the product will work, and it limits how many people can be targeted by its flagship "Pegasus" product. He estimated that at any given time, NSO customers have no more than 150 to 200 "targets" worldwide.

"We do not tolerate misuse of our products. If there is suspicion of misuse, we investigate it and take the appropriate actions, including suspending or terminating a contract," the NSO statement said.

Information for this article was contributed by Raphael Satter and Areej Hazboun of The Associated Press.