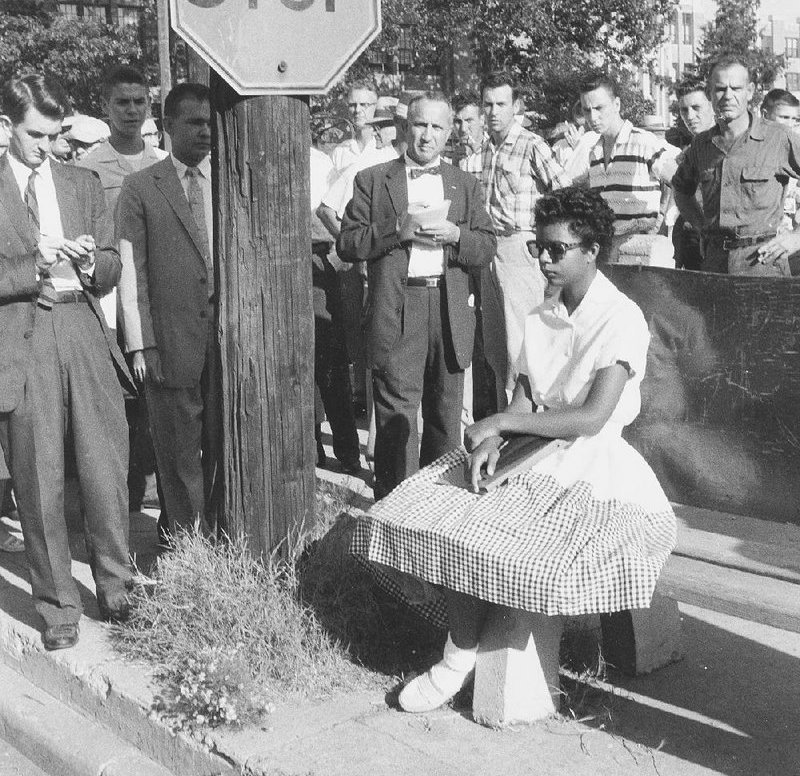 Arkansas Gazette reporter Jerry Dhonau (far left) is among journalists helping to shield Elizabeth Eckford from the angry crowd Sept. 4, 1957, as she waits for a bus during the Little Rock Central High Crisis.

Dhonau was 83. His daughter said he died of natural causes. He had been ill off and on since March.

As one of the youngest reporters at the Gazette in 1957, Dhonau stayed at the school every day for a couple of months and "recorded the events that attracted world attention and created the greatest constitutional crisis since the Civil War," wrote Ernie Dumas, a colleague of Dhonau's, in an obituary submitted to the Arkansas Democrat-Gazette.

Eventually, President Dwight Eisenhower federalized the Arkansas National Guard and sent the 101st Airborne Division to the school to ensure that it was desegregated.

Dhonau and another young reporter, Ray Moseley, were responsible for most of the Gazette's coverage of the events at Central High School and at the state Capitol during that period, wrote Dumas. The Gazette won two Pulitzer Prizes that year, one for editorials on the school crisis and one for exceptional community service.

Dhonau's face appears in a few of the iconic photographs of the period.

When Elizabeth Eckford, one of the nine students who were to desegregate Central High School, arrived for school on Sept. 4, 1957, she was met by an angry mob and armed National Guardsmen, said Park Ranger Jodi Morris at the Little Rock Central High School National Historic Site.

Eckford was the first black student to arrive, and she walked through the jeering crowd two blocks to a bench at 16th and Park streets, Morris said.

Several reporters, including Dhonau, joined her along the way, then stood around her as she sat on the bench, forming a barrier of sorts between Eckford and the crowd, said Morris.

"She walked up to the corner of 14th and Park, and there was no way for her to cross the National Guard line," Dhonau told Dumas in an interview in 2000.

So Eckford walked south on Park Street, which borders the front of the school.

"Every once in a while, she'd turn to her right as if she could go on in the school," Dhonau told Dumas. "Each time, they'd close ranks. She just kept going. It wasn't very far down the line where the hecklers started. I was walking along with her, but off to the side so I wouldn't be part of it."

Eckford walked to the bench at 16th and Park and sat down. The crowd was getting "even rougher and shouting," Dhonau told Dumas.

"This was just outrageous," said Dhonau. "Several of us cared for her safety as she was waiting for that bus. There was a woman, a white woman, who came up and sat down with her. Her name was Grace Lorch. As they were sitting on the bench, the hecklers weren't relenting. So several reporters, including me, gathered around them, which formed a little bit of a shield. ... Eventually, the bus came and she got on the bus and left."

Stephanie Dhonau said it was a significant moment in her father's career.

"He didn't question whether he should do that or not," she said. "He just did it. He said that was the one time in his journalism life when he lost objectivity. He just couldn't stand to see her walking by herself among this mob, this angry crowd."

Dhonau attended Little Rock High School, later renamed Central High School, where he was co-editor of the student newspaper. He resigned in 1952 because the journalism teacher wouldn't publish a column he wrote advocating for a new field house to be named for Riley Johns, a black athletic trainer, groundskeeper and equipment manager for the school's sports teams.

Johns "was a father figure to some of the athletes there, and I got to know him pretty well," Dhonau told Dumas in 2000. "One year, I was student manager [for the football team], so that's how I got to know him."

Dhonau went on to earn a bachelor's degree from the University of Arkansas, Fayetteville and a master's from Columbia University in New York City.

In his later years, Dhonau and his wife, Joyce, split their time between residences in Albuquerque and Little Rock.