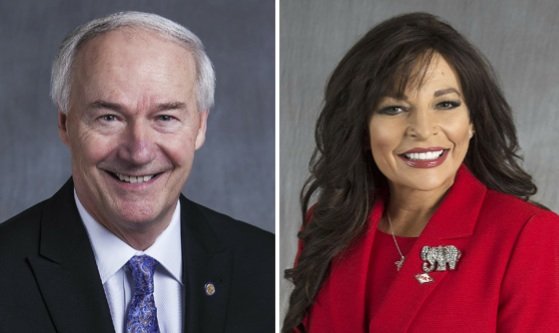 Asa Hutchinson (left) and Jan Morgan (right) are shown in this combination photo.

Jan Morgan often calls Gov. Asa Hutchinson “a big government, tax-and-spend, establishment progressive,” in her bid to defeat the governor in the May 22 Republican primary election.

Morgan’s depiction of Hutchinson “always brings a smile to my face. It’s rather comical,” he said in a recent interview.

Morgan is making her first bid for elected office. She’s the owner of the Gun Cave shooting range in Hot Springs, and a former television reporter and news anchor.

“The time is right for an outsider,” she said. “Although I am seeking the Republican nomination, I am a constitutional conservative. I am a fiscal conservative.”

Morgan said voters should cast their ballots for her because “it is time that we remove the oversized government footprint off the backs of the people and stop tripping over excessive taxation and regulations.”

Hutchinson said people should vote for him in the GOP primary because “I have got a clear conservative record of governing Arkansas with a vision for our future that includes tax cuts, job creation and a focus on transforming state government to better meet the needs of the citizens.”

In the Nov. 6 general election, the winner of the Republican primary will face the Democratic nominee, either Jared Henderson of Little Rock or Leticia Sanders of Maumelle, and Libertarian candidate Mark West of Batesville. The governor’s salary is now $143,820 a year.

Hutchinson has a larger campaign war chest than Morgan, according to their latest campaign finance reports.

In 2014, Morgan drew national media attention by declaring her gun range a “Muslim Free Zone,” saying that she was concerned about the safety of other customers if Muslims patronized her business.

In the 2017 regular session, Morgan testified before a state House committee against legislation that Hutchinson later signed into law that’s aimed at barring concealed weapons permit holders with enhanced training from taking their guns into collegiate sporting events, the University of Arkansas for Medical Sciences and the State Hospital.

She also opposed an earlier 2017 law signed by Hutchinson to allow those concealed weapons permit holders, who have up to eight hours of extra training, to carry their guns on college campuses and some other public places.

In mid-December, Hutchinson sent a letter to the Arkansas State Police and prosecutors that stated he believes a much-debated 2013 state law allows the open carry of handguns as long as there is no intent to unlawfully use the handgun.

Morgan said in response that she believes the U.S. and Arkansas constitutions allow gun owners to carry weapons, either openly or by concealing them, without having to get any permits.

Morgan said her top priorities, based on conversations with Arkansans, would include “dramatic large-scale tax reform” without repealing tax exemptions, and cutting state spending to help finance tax cuts. She hasn’t released a tax cut plan.

Hutchinson said his top priorities will include seeking legislative approval of his plan to cut the state’s top individual income tax rate from 6.9 percent to 6 percent to make the state’s tax rate more competitive with surrounding states, and reducing the number of state agencies that report to him.

He said 42 state agencies currently report to him, and he wants to cut that number to fewer than 20 to better serve Arkansans, eliminate some duplication of services and “over time, save significant amounts of money.”

He said he plans to finance the income tax cut through “a combination of economic growth and savings through our budget constraints.” The cut would reduce revenue by an estimated $180 million a year.

Asked whether the proposed cut also would be financed with the elimination of sales tax exemptions, Hutchinson said, “that remains to be seen. I am not counting on that. I am waiting obviously to see what [a legislative tax overhaul task force] report is. I haven’t identified any exemptions that would help us meet that objective yet, and we’ll wait and see.”

In 2015 and 2017, the Republican-controlled Legislature enacted his plans to cut individual income tax rates for Arkansans who make up to $75,000 a year in taxable income. The state projected that the tax cuts will collectively reduce state tax revenue by about $150 million a year.

In 2017, the Legislature also enacted his plan to exempt military retirement benefits from the state income tax to attract retirees. That law also cut the excise tax on soft-drink syrup, but increased the reduced 1.5 percent sales tax on candy and soft drinks to 6 percent; levied income taxes on unemployment insurance; and imposed a sales tax on certain digital products.

The tax reductions are eventually projected to pare revenue by $19.3 million a year, but the increases will raise the same amount.

“I’m tired of us being at the bottom. I like some of the things that the governor has done on the academic side,” she said. “I still think we need to do more on the vocational side, too, so we have a more diverse educational system for all students in this state and not just the academic college-bound.”

Hutchinson said his top priorities include expanding on his nationally recognized plan to provide computer science education in each high school, and focus on a reading initiative to ensure that students read at grade level in the third grade with an emphasis on phonics.

Another priority will be to build on the progress of giving each high school student options for a career path and an opportunity to succeed whether the student wants to enter a trade or a profession or college, he said.

He said his other priorities include developing a long-term highway program for needs of roughly $400 million, but he prefers that any tax increase for highways be referred to the voters, as well as getting high-speed broadband to each community in Arkansas.

Morgan has criticized Hutchinson for the growth of state government’s general revenue spending since he became governor in 2015. The Republican-controlled Legislature has usually tweaked the governor’s proposed general revenue budgets before approving them.

“Under our current leadership, we have increased government spending by over $600 million in his first term,” she said. “That is unacceptable. As a Republican, we are supposed to be about shrinking government, decreasing spending.”

But Morgan hasn’t detailed where she would cut state government spending. “Day one, we freeze spending and let’s start looking for places to cut spending,” she said.

These increases are smaller on a percentage basis than the average annual growth of 3.5 percent over the past 20 years, according to the finance department.

Asked about Morgan’s criticism of increased state spending, Hutchinson said, “If you are a growing state, it’s about managing state services in an efficient way.

“In Texas, their budget goes up under Gov. Greg Abbott. In Tennessee, under Gov. Bill Haslam, the budget goes up, so the fact that Arkansas’ budget grew reflects the fact that we had to build a $50 million prison, [and] we have a constitutional mandate to increase spending in k-12 education to make sure that we keep up with our educational improvement efforts,” he said. The Texas and Tennessee governors are Republicans.

“I am very proud of the fact that we have been able to have $150 million in annual tax cuts. We have created efficiencies in state government, and we’ve had a conservative approach to the budget. That’s what needs to be looked at,” Hutchinson said.

Regarding the state’s Medicaid expansion program, now called Arkansas Works, Morgan says on her campaign website that “we should end this program now, under our own terms, before this is forced on us by the federal government.”

She said the state is going to pay a larger share of the cost of the program, and “we would be better off with just [traditional] Medicaid” for the disabled, elderly and poor.

Under the Medicaid expansion, which is optional for states, about 280,000 low-income Arkansans are covered by private health insurance paid for with state and federal funds. The expansion initially was authorized by the Republican-controlled Legislature and then-Gov. Mike Beebe, a Democrat, in 2013.

The program is projected to cost $1.95 billion in federal funds and $135 million in state funds in fiscal 2019, which starts July 1. The state’s share of the cost is 6 percent this year, 7 percent next year and then 10 percent starting in 2020 under federal law.

In February, Hutchinson’s administration projected that eliminating the expansion would cost $88.6 million more a year in general revenue. That is based in part on an estimated 86,500 people in the program signing up for the traditional Medicaid program, which has a lower percentage of federal matching dollars. The administration also said the end of the expanded Medicaid program would mean more uncompensated care costs for hospitals.

Morgan has dismissed those figures.

Hutchinson said, “The future of the program is continued fine-tuning it and reforming it with measures that emphasize individual responsibility and cost-saving measures, but also meet the needs of those that are struggling to get a better job and to move up that economic ladder.

“We want to be able to control our own destiny in terms of cost and managing the program, and we’ll either achieve that through massive change in Washington with legislation and a replacement bill, or we’ll achieve it through continued waivers and working with the Trump administration to give the state the flexibility we need,” Hutchinson said.

He said he is making another bid to win the Trump administration’s approval of a waiver to reduce the income threshold for the program from the current 138 percent to 100 percent of poverty level, which the state estimates would cut the number of participants by about 60,000.

Morgan said she favors eliminating the Governor’s Quick-Action Closing Fund, created under Beebe, that is used to help businesses expand and locate in the state.

It allows the governor to pick winners and losers in business, she said.

Hutchison said the fund is an incentive reserved for only the most competitive projects and allows the state to make up the difference when the project faces a competitive disadvantage.

“We have been very conservative in our use of the fund, and the fund is not used by this Administration in many of the expansion agreements and new industry relocations to Arkansas,” he said in a statement. “I look very closely at the return for the state of Arkansas in terms of job creation and economic benefits. The result of this approach is that the life of the fund lasts longer, and the General Assembly has to replenish the fund less often.” 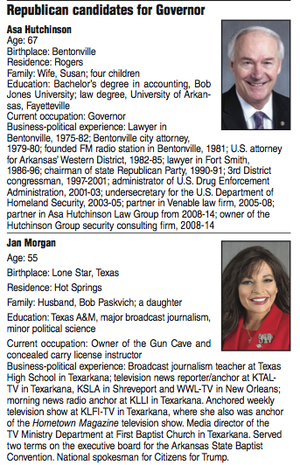