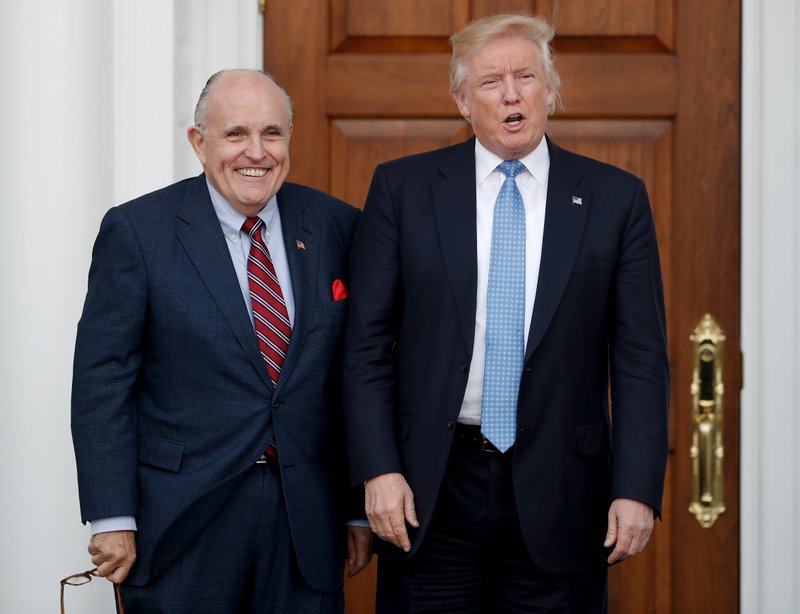 NEW YORK -- The Democratic Party sued Donald Trump's presidential campaign, Russia, WikiLeaks, and Trump's son and son-in-law Friday, accusing them of an intricate conspiracy to undercut Democrats in the 2016 election by stealing tens of thousands of emails and documents.

The lawsuit filed in Manhattan federal court seeks unspecified damages and an order to prevent further interference with computer systems of the Democratic National Committee.

The lawsuit startled Republicans in Washington as well as Democratic leaders, who were briefed only at the last minute about the DNC's plans to pursue civil litigation. Tom Perez, chairman of the Democratic Party, said the committee had alerted Senate Minority Leader Charles Schumer, D-N.Y., and House Minority Leader Nancy Pelosi, D-Calif., the top Democrats in Congress, "when we were about to file."

"During the 2016 presidential campaign, Russia launched an all-out assault on our democracy, and it found a willing and active partner in Donald Trump's campaign," Perez said in a statement. He called it an "act of unprecedented treachery."

The Democrats accuse Trump and his associates of trading on pre-existing relationships with Russian oligarchs tied to President Vladimir Putin and of collaborating with Russia as it worked to undermine Democratic nominee Hillary Clinton.

The president has said repeatedly that there was no collusion between his campaign and Russia. On Friday, his campaign scorned the lawsuit as "frivolous" and predicted that it would quickly be dismissed.

"This is a sham lawsuit about a bogus Russian collusion claim filed by a desperate, dysfunctional and nearly insolvent Democratic Party," Trump campaign manager Brad Parscale said in a statement.

He said the campaign would seek to turn the tables on the Democrats, using the legal discovery process to try to pry documents from the DNC including any related to a dossier detailing allegations of links between Trump and Russia. The dossier -- a collection of memos -- was written by an ex-British spy whose work was funded by Clinton and the DNC.

Trump himself tweeted that the DNC lawsuit could be "very good news," saying his campaign "will now counter for the DNC Server that they refused to give to the FBI" as well as Clinton's emails.

Trump's tweet also referred to "the Wendy Wasserman Schultz Servers and Documents held by the Pakistani mystery man." He appeared to be referring to former DNC Chairman Debbie Wasserman Schultz and reports of an information technology specialist who once worked for some House Democrats.

Requests for comment from the Russian Embassy in Washington were not immediately returned.

The lawsuit was denounced at the time by Nixon's attorney general, John Mitchell, who called it a case of "sheer demagoguery" by the DNC. But the civil action filed by the DNC's then-chairman, Lawrence O'Brien, was ultimately successful, yielding a $750,000 settlement from the Nixon campaign that was reached on the day in 1974 that Nixon left office.

Nick Akerman, a former Watergate prosecutor who now specializes in computer fraud cases, said he thought the Democrat's suit had merit and, despite predictions from Trump-allied lawyers, was unlikely to go away anytime soon.

"There is no way it's going to be dismissed," said Akerman, a partner in the New York office of the Dorsey & Whitney law firm. "At least not on the computer fraud part of the case, which is really the heart of it. The Democrats have every right to bring this suit as they are aggrieved. My question is: What took them so long?"

The Democrats' lawsuit doesn't reveal new details in the sprawling storyline of connections between the Trump campaign and Russian operatives working on behalf of the Kremlin.

Instead it knits many of the threads that have emerged in public over the past two years to create a picture of an alleged conspiracy between the Trump campaign, the Kremlin and WikiLeaks founder Julian Assange.

The DNC says the "brazen attack on American democracy" began with a cyberattack on DNC computers and phone systems in 2015, allowing the extraction of tens of thousands of documents and emails. WikiLeaks then blasted out many of the documents on July 22, 2016, shortly before Clinton was to be nominated -- upsetting the Democrats' national convention.

That added up to a "campaign of the presidential nominee of a major party in league with a hostile foreign power to bolster its own chance to win the presidency," the DNC lawyers wrote in the lawsuit.

That conspiracy violated the laws of the U.S., Virginia and the District of Columbia, the lawsuit says, and "under the laws of this nation, Russia and its co-conspirators must answer for these actions."

The DNC accuses Donald Trump Jr. of secretly communicating with WikiLeaks, and blames the president, too, saying he praised the illegal dissemination of DNC documents throughout the fall of 2016, making it a central theme of his speeches and rallies.

The DNC also accuses Trump son-in-law Jared Kushner of being a co-conspirator for his role overseeing the Trump campaign's digital operation.

White House officials and a number of other defendants did not immediately comment on the lawsuit. Roger Stone Jr., a former campaign adviser to Trump who is named as a defendant in the suit, dismissed it in an email as "a left-wing conspiracy theory dressed up as a lawsuit."

In a statement forwarded by Stone, Rob Buschel, Stone's lawyer, said he had not yet been served with the DNC suit and described it as a "regurgitation" of a complaint filed last year by Democrats alleging their privacy was invaded during the campaign. That litigation is still in progress.

WikiLeaks responded to the lawsuit caustically.

"DNC already has a moribund publicity lawsuit which the press has become bored of -- hence the need to refile it as a 'new' suit before mid-terms," the group said in a tweet. "As an accurate publisher of newsworthy information WikiLeaks is constitutionally protected from such suits."

Assange, avoiding detention, remains in the Ecuadorean Embassy in London.

Mueller also has indicted 13 Russian individuals working for the Internet Research Agency accused of running an elaborate scheme to meddle in the U.S. elections. The indictment alleges one of Putin's close allies, Yevgeny Prigozhin, oversaw the effort.

While the investigation is ongoing, Perez said the DNC decided to move ahead with a civil suit because the committee believed there was an ongoing threat of foreign interference in U.S. elections and it was unclear when Mueller's probe might conclude. And certain claims in the lawsuit, he said, face statutory expiration dates.

"I don't know when Mueller will finish," Perez said. "I'm very concerned about the run-up to the midterm elections."

Perez firmly denied that the lawsuit had a political purpose, but he appeared to allude at points to the possibility that civil litigation might bring to light damaging information about Trump and his associates.

The hacking of the DNC has long been a sore spot for Democrats across the board since Clinton's loss in November 2016. The hack and subsequent release of the emails hit the party just before it formally nominated Clinton, and the emails remained a major issue through Election Day.

Wasserman Schultz lost her job as party chairman just hours before the nominating convention after emails were released showing the DNC appearing to favor Clinton over Bernie Sanders in the primaries. The emails ripped open fresh wounds and formed a rallying cry for Sanders supporters hoping for a last-minute chance to deny Clinton the nomination in Philadelphia.

Wasserman Schultz confronted then-FBI Director James Comey a few months later, in an April 16 exchange with reporters in her district office in Florida, accusing him of helping throw the election to Trump because of his handling of the Clinton email investigation. DNC staff members at the time accused the FBI of not doing enough immediately after the hack was discovered in 2015 to alert them to the problem.

Democrats have similarly been critical of President Barack Obama for not doing enough in 2016 to fight back against Russia. Obama expelled Russian diplomats and shuttered diplomatic compounds in December 2016.

Information for this article was contributed by Tom LoBianco, Larry Neumeister and Chad Day of The Associated Press; by Alexander Burns and Michael D. Shear of The New York Times; and by Tom Hamburger, Rosalind S. Helderman, Ellen Nakashima and Alice Crites of The Washington Post.

*CORRECTION: U.S. Rep. Debbie Wasserman Schultz, D-Fla., the former chairman of the Democratic National Committee, blamed former FBI Director James Comey’s handling of the investigation into Hillary Clinton email for damaging Clinton’s presidential campaign in an April 16 exchange with reporters in her district office in Florida. A previous version of this story incorrectly stated she made the accusation in a private meeting with Comey in January 2017.