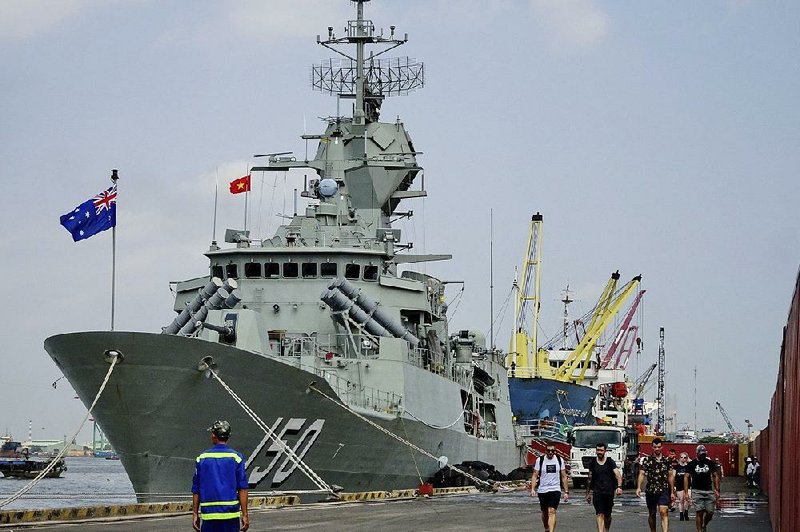 The Australian frigate HMAS Anzac sits docked in Ho Chi Minh City, Vietnam, after it and two other Australian ships reportedly were challenged by Chinese vessels in the South China Sea.

CANBERRA, Australia -- Australia's prime minister said his country has a "perfect right" to traverse the South China Sea after a media report Friday that the Chinese navy challenged three Australian warships in the hotly contested waterway.

It is not clear what took place during the encounter while China was conducting its largest ever naval exercises in the region.

China's Defense Ministry defended its navy's actions, saying the report "does not conform with the facts."

On April 15, ships from the Chinese and Australian navies "encountered each other in the South China Sea," it said in a statement. "The Chinese ships employed professional language in communicating with the Australian side, operated legally and according to regulation, professionally and safely," the statement said.

No details were given about what was communicated during the exchange or if any other actions were taken.

China claims virtually the entire South China Sea and has built several islands to bolster its position in the waterway where other governments have competing claims and which is one of the world's busiest sea lanes.

Australia has resisted pressure from the United States, its most important defense ally, to challenge the Chinese territorial zones, which are not recognized by international law. U.S. Navy vessels regularly sail close to Chinese-built features that include military installations, drawing protests from Beijing.

"We maintain and practice the right of freedom of navigation and overflight throughout the world and, in this context, we're talking about naval vessels on the world's oceans, including the South China Sea, as is our perfect right in accordance with international law," Australian Prime Minister Malcolm Turnbull said. He did not comment on the specific incident when questioned by reporters in London.

The Defense Department said it did not provide operational details related to ships transiting the South China Sea. But it confirmed the three warships had arrived in Ho Chi Minh City on Thursday. They are making a three-day goodwill visit to Vietnam.

Neil James, executive director of the Australian Defense Association, a security policy think tank, said the first aspect of such a challenge was usually a radio warning that the Australians were in Chinese territorial waters and a demand for identification. The Australians would have replied that they were in international waters.

The next levels of challenge involve sending an aircraft and ship to investigate.

"It just escalates. Eventually if they're in your territorial waters and they're not meant to be there, you might fire a shot across their bows -- but no one has done that for years, apart from the North Koreans," James said.

Adm. Harry Harris, the commander of U.S. forces in the Pacific, has invited Australia to mount joint naval patrols in the South China Sea and has described China as "a disruptive transnational force."

President Donald Trump has nominated the outspoken critic of China as the next U.S. ambassador to Australia.

Information for this article was contributed by Christopher Bodeen of The Associated Press.