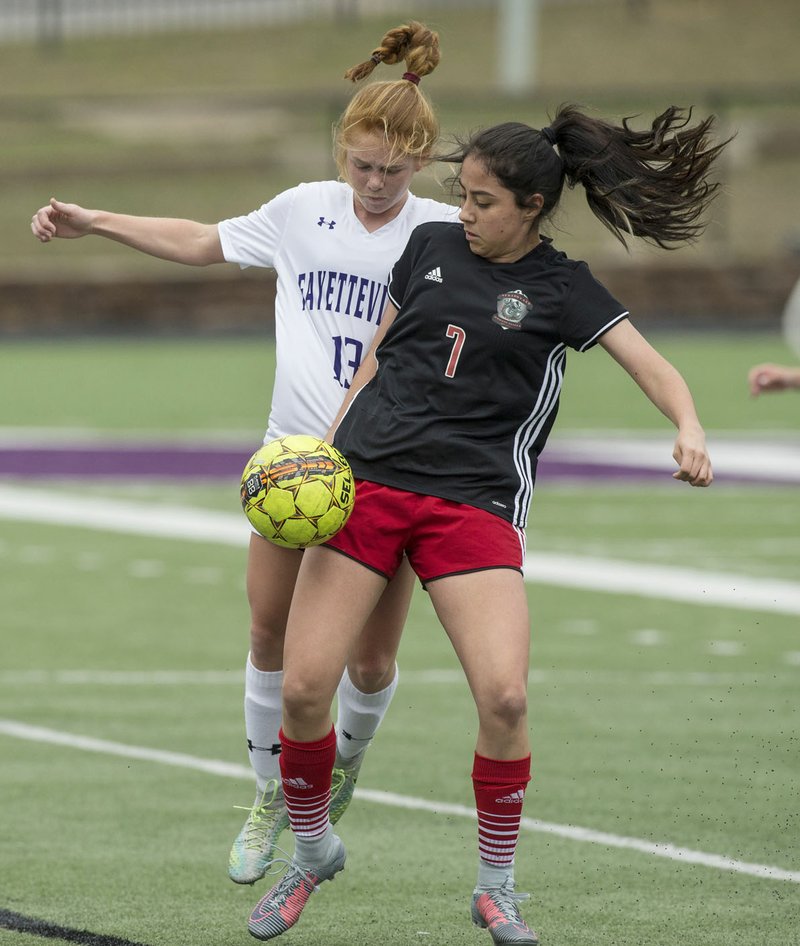 Jessica Paez (7) of Springdale and Morganne Browning (13) of Fayetteville compete for the ball Friday, April 6, 2018, during the match at Fayetteville's Harmon Stadium. - Photo by Ben Goff

SPRINGDALE -- It was a mid-season contest on a 25-match schedule to most people.

Anyone with an ounce of knowledge about prep soccer in Northwest Arkansas never gave the March 29 match a second thought. Springdale High girls at Bentonville? The only question that loomed about the 7A-West Conference meeting wasn't if Bentonville would win but by how many goals.

Coming into the match, Springdale had been outscored 50-1 by the Lady Tigers since 2014 with five shutouts.

Goals were sparse again on this chilly night, but the difference was that the net stayed empty on both sides of the pitch for the entirety of the regulation match. It was 0-o when the horn sounded, sending the match to penalty kicks to determine a winner.

The Lady Bulldogs sent four penalty kicks into the net. Needing a save to pull off the most stunning victory in 7A-West girls soccer, Springdale High keeper Cinthia Sanchez delivered, and the Lady Bulldogs celebrated like it was, well, no one could really remember when.

"It was huge," Sanchez said. "It was exciting. I was screaming, just really, really emotional because, I mean, it's Bentonville."

The loss was just Bentonville's third in conference play over the past six seasons. More important than the win itself was the confidence boost it gave the floundering Springdale soccer program, second-year coach D.J. Beeler said.

Last season the Lady Bulldogs made the state tournament for the first time in a decade. Springdale (8-7-1, 4-3 7A-West) used that success as a springboard into this season and briefly led the conference race before falling to Fayetteville and Rogers in recent matches. 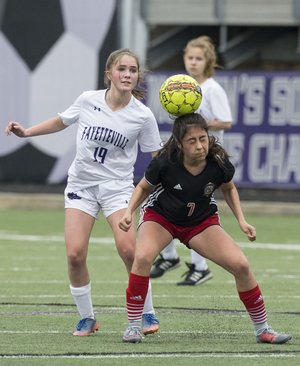 Photo by Ben Goff
Jessica Paez of Springdale wins a header over Sophia Birch of Fayetteville on April 6 during the match at Fayetteville’s Harmon Stadium. 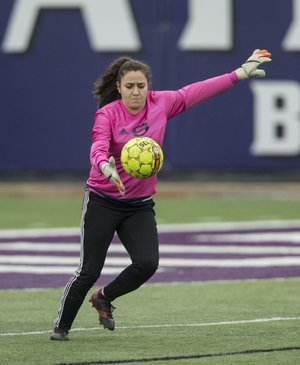 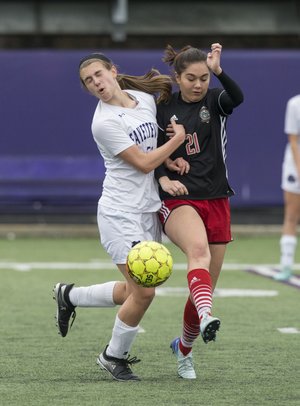 "Just a change in culture, getting the girls organized has made a difference," Beeler said. "Honestly winning a couple of games that maybe they didn't even expect to win, I think that's kind of given them some new belief in themselves."

Beeler also coaches the successful boys' program at Springdale. Senior midfielder Zoe Downum, who scored one of the penalty kicks against Bentonville, said girls soccer has been an afterthought at Springdale, but that is starting to change.

"People would say they are coming to our games, but they would leave as soon as the boys game ended," she said. "They would say, 'How much are you going to lose by today?'"

Jessica Paez has been with the program since her freshman season. The senior midfielder admits it was hard not to get discouraged as the losses mounted and blowouts were routine.

"My dad would say you can only do so much, so don't get frustrated. Just enjoy playing," she said. "It's a lot more fun. Now we're more competitive. In the past we just hoped to score, it was never about winning. It was just about not getting beat so bad."

All three seniors said a major difference in the program is the chemistry shared by team members. The players spend time away from the soccer field together to help with bonding and communicate more on the field.

Sanchez is planning on continuing her soccer career at Neosho (Kan.) Community College and plans to sign a letter of intent soon.

"Over the years the girls' soccer program wasn't recognized," she said. "This is big for our community. We're something now."