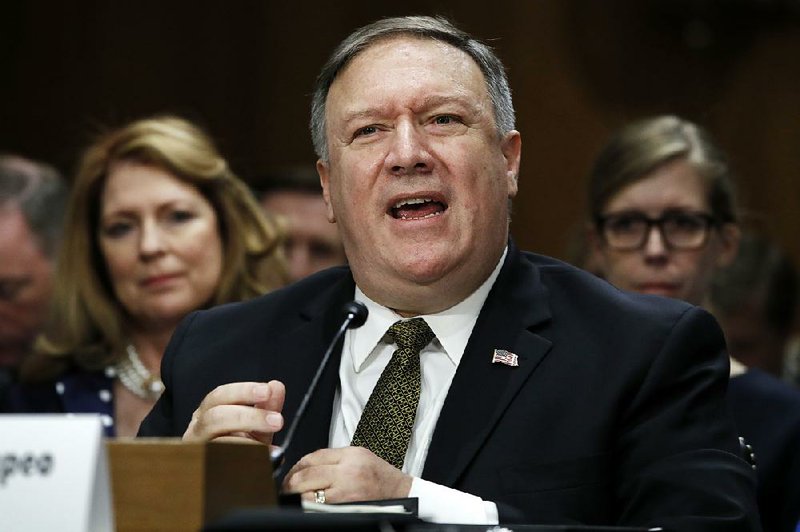 Mike Pompeo, the secretary of state nominee, told senators Thursday that he would express his views forcefully but carry out the president’s decisions.

WASHINGTON -- Senators on Thursday implored Mike Pompeo, the CIA director nominated to be secretary of state, to stabilize the administration's erratic diplomacy by standing up to Russia and other foes and reviving U.S. influence among allies.

Under persistent questioning, Pompeo confirmed for the first time publicly that he had spoken to Robert Mueller, the special counsel investigating Russia's meddling in the 2016 election. But Pompeo refused to describe what he had said, maintaining that he was at the hearing to discuss foreign policy.

He vowed a tough stance on Russia, saying "I take a back seat to no one" when it comes to confronting the adversary. However, when asked if he would resign if Trump moved to scuttle the probe by firing Mueller or the deputy attorney general to whom he reports, he replied, "My instincts tell me no."

"My instincts tell me my obligation to continue to serve as America's senior diplomat will be more important in times of domestic political turmoil," he said.

If confirmed, Pompeo would be the Trump administration's second secretary of state in 14 months.

Pompeo's nomination faces stiff opposition from a handful of Republicans and many Democrats as well as supporters of the Iran nuclear deal, environmentalists and minority-rights groups, and his testimony before the Senate Foreign Relations Committee appeared designed to blunt their criticism.

The CIA chief told senators that he has been miscast as a "hawk" despite previous comments savaging the Iran accord and hinting at regime change in North Korea. He said he wants to improve the Iran deal and would continue efforts to do so even if President Donald Trump withdraws from it as he has threatened.

In a week when Trump issued a fusillade of tweets about Syria, Russia and China that often contained contradictory and inconsistent policy positions, the hearing kicked off with the question of how Pompeo would manage White House impulses that can have global effects.

"Will you enable President Trump's worst instincts?" asked Sen. Robert Menendez of New Jersey, the senior Democrat on the committee. Sen. Bob Corker, R-Tenn., chairman of the committee, said that while Trump has sometimes been erratic, "we have also seen that good counsel has led the president to evolve."

Pompeo said he would express his views forcefully but carry out the president's policies once decisions were made.

On Wednesday, Trump said in a tweet that "much of the bad blood" between the United States and Russia "is caused by the Fake & Corrupt Russia investigation."

During Thursday's hearing, Sen. Jeanne Sheehan, D-N.H., asked Pompeo if he agreed with that description of the root of tensions between Moscow and Washington.

He did not. "The historic conflict between the United States and the Soviet Union and now Russia is caused by Russian bad behavior," Pompeo said.

As planning was underway at the White House and Pentagon for a potential missile strike on Syria in retaliation for a suspected chemical weapons attack against civilians, Pompeo, a former Army captain, stressed that "war is always the last resort."

"I would prefer achieving the president's foreign-policy goals with unrelenting diplomacy rather than by sending young men and women to war," he said.

At one point, Code Pink protesters interrupted the hearing, denouncing what they said was Pompeo's support for war.

Pompeo kicked off his remarks to the panel with a reminder to lawmakers that, as a former Republican congressman from Wichita, Kan., he understands the important oversight role of Congress. He pledged to be in regular contact and work well with the committee -- something Rex Tillerson was not known for during his brief term.

The senators' insistence that the State Department be on the same foreign-policy page as the president alluded to the relationship between Trump and the previous secretary of state, who often contradicted each other.

VOWS TO FILL THE RANKS

Throughout the hearing, Pompeo drew a sharp contrast between himself and Tillerson, the former chief executive of Exxon Mobil Corp. whom Trump unceremoniously fired from the secretary of state post last month.

Pompeo lamented the "demoralizing" vacancies at the top echelons of the department during Tillerson's brief tenure and said he planned to fill those vacancies and to raise the department's morale.

He diverged from Tillerson's vision for the nation's diplomatic corps, telling Sen. Todd Young, R-Ind., that he did not foresee any slowing of its mission or reduction in personnel.

In one prominent example, Pompeo suggested he would return some of the U.S. diplomats who were withdrawn from Cuba last year after they were sickened in what some suspect was a covert attack with Havana's knowledge. Trump has tightened restrictions on travel and trade with Cuba.

"Consistent with keeping folks safe, we will build out a team there," Pompeo told Sen. Tom Udall, D-N.M., also suggesting he would push for increased agricultural sales in Cuba.

Pompeo also cast his close connection to Trump as an advantage that would help him restore the significance of the department.

"My relationship with President Trump is due to one thing: We've demonstrated value to him at the CIA. So, in turn, he has come to rely on us," Pompeo said. "I intend to ensure that the Department of State will be just as central to the president's policies and the national security of the United States."

On climate change, some Democratic lawmakers were dismayed when Pompeo equivocated when asked about the issue -- acknowledging that climate change is occurring but saying only that it's "likely" that humans are contributing to it.

Still, although Trump has announced the U.S. is pulling out of the Paris global climate agreement, Pompeo said the State Department should be involved in global efforts to address global warming.

Sen. Cory Booker, D-N.J., asked a series of pointed questions about Pompeo's previous denunciations of American Muslim leaders for what he called their "silence" in response to a terrorist attack.

Pompeo replied that he believed Islamic religious leaders had a particular "opportunity" to denounce terrorism by Muslims, rather than a responsibility.

Booker agreed that "silence in the face of injustice lends strength to that injustice." However, he took issue with "saying certain Americans -- I don't care if it's Kareem Abdul-Jabbar or Muslims that serve on my staff -- if they're in positions of leadership," they "suddenly have a special obligation."

The senator then pivoted to ask if Pompeo stood by comments he made as a congressman that gay sex and same-sex marriage were a "perversion."

Pompeo said he still believed same-sex marriage was inappropriate but that he supported gay couples in the government. "My respect for every individual regardless of sexual orientation is the same," he said.

Two sitting senators and former Sen. Bob Dole, the longtime Republican leader from Kansas, introduced Pompeo to the committee and spoke highly of his credentials to be the United States' top diplomat and his commitment to the rule of law.

Dole, who also introduced Pompeo during his confirmation hearing last year to be director of the CIA, warmed up the panel, which is far from unanimous in its support to confirm the nominee. "I can see all you people up there. I can't see very well, so you look good," said Dole, 94.

Sen. Richard Burr, R-N.C., chairman of the Senate Intelligence Committee, assured his peers that Pompeo is transparent and a "natural fit" for the job.

"I asked Mike to lead the CIA in an ethical, moral and legal manner," Burr said. "And I'm here to tell you that he did exactly that."

He asked those on the committee to examine Pompeo's nomination on the merits alone.

"If there's ever one where you put politics aside, this is it," Burr said.

Pompeo caught Trump's attention with his broadsides on Hillary Clinton during 2015 congressional hearings about the attacks on a diplomatic compound in Benghazi, Libya, that left four people, including Ambassador J. Christopher Stevens, dead. At the time, Pompeo was a congressman.

Pompeo has been the director of the CIA over the past year. At least one officer died on his watch.

Information for this article was contributed by Gardiner Harris and Eileen Sullivan of The New York Times; by Matthew Lee, Josh Lederman and Matthew Pennington of The Associated Press; and by Tracy Wilkinson of the Los Angeles Times.