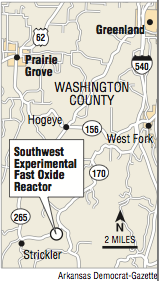 An additional $10 million in federal funding announced Wednesday will allow for the full cleanup of a nuclear reactor test site in rural Washington County, officials said.

The announcement ends uncertainty about efforts to complete cleanup of the Southwest Experimental Fast Oxide Reactor site, located about 20 miles southwest of Fayetteville. The 20-megawatt reactor ceased operations in the early 1970s and since 1975 has been owned by the University of Arkansas, Fayetteville.

Nearby residents were told at a March 15 community meeting that work was only funded through the end of the month for the project. When planning the cleanup, UA officials said the estimated total project cost was $26.1 million.

In a statement, Steinmetz said "a decades-old problem will now be eliminated," praising the efforts made by Womack and Boozman.

The money is coming from federal appropriations after the Consolidated Appropriations Act was approved by federal lawmakers on March 23, according to the Wednesday announcement.

Mike Johnson, UA's associate vice chancellor for facilities, said in an email that the site's entire 620 acres are expected to return to "greenfield" status, which would allow for unrestricted use once the cleanup is finished.

Johnson said contract negotiations are ongoing with Utah-based Energy Solutions, but finishing the cleanup is "essentially guaranteed" and work will be done over the next 12 months once the deal is finalized.

Before the most recent funding announcement, UA and Energy Solutions planned to halt work by April 1 while continuing to monitor the site.

Johnson said there has been perhaps a few weeks break from "active" dismantling work.

"We are currently preparing contract amendments and modifications in order to resume full operations in April, 2018 if at all possible," Johnson said.

UA leaders and elected officials had long sought federal aid to pay for the cleanup. A $10.5 million U.S. Department of Energy grant announced in October 2016 jump-started site work, with a later infusion of about $5 million in federal appropriation funds paying for cleanup to continue into this year.

The work came after UA received a $1.9 million federal planning grant in 2009.

Since the beginning of last year, the site's control room has been demolished. Thousands of pounds of low-level radioactive waste have been trucked away from the site and taken to specialized waste facilities outside the state.

In December, Dean Wheeler, project manager for Energy Solutions, said about 16,000 pounds worth of material left the site in that month alone.

But as of March 15, a lack of federal money made uncertain when the radioactive reactor core might be removed.

"The reactor core, when it comes out finally, has to go into a special, shielded container that has to be designed for this particular size and shape," Johnson said at the March 15 meeting.

Wheeler at the meeting described design work already done for the container, adding that the reactor core eventually would be taken away via a "large, heavy-haul truck."

Last year, Wheeler said the reactor core has a diameter of 33 inches, "extremely small in comparison to what we're used to, with 1,000 megawatt plants" that might have a core region with a diameter of 15 feet.

"Nonetheless, it's radioactive enough that it could kill you," Wheeler said about the reactor core.

Johnson told residents at the March 15 meeting that if $8 million in funding came through quickly, the project might end up costing a total of about $24 million.

On Wednesday, Johnson said the total federal dollars approved so far add up to about $26 million, and the "hope" is to finish the project at a cost below the $26.1 million estimate by early 2019.

Ann Harbison, an elected official in Washington County who lives in West Fork, about 10 miles from the site, said that amid the funding uncertainty she feared the project had "gotten put on the back shelf again."

"I'm delighted that its going to be finished," Harbison said. For decades, people living near the site "felt it as kind of a safety issue, a hazard in the community," she said.

The reactor, commonly known as SEFOR, was built in the late 1960s with funding from the U.S. Atomic Energy Commission and operated by a group of investor-owned utilities, according to UA. It was never hooked up with the necessary equipment to generate electricity.

The university took over ownership to use the site for research, but by 1986 it had fallen out of use.

In a statement, Boozman said that as a member of the Senate Appropriations Committee, "I have long advocated for federal funding to decommission SEFOR in a safe and responsible manner."

Womack, in a statement, said he's pleased at the latest funding commitment "sufficient to accelerate completion of this long overdue project."