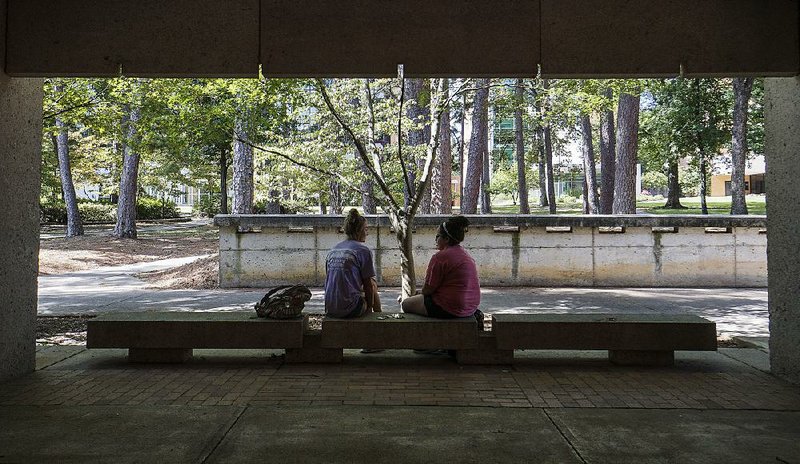 Students Hannah Wall (left) of El Dorado and Lucee Lugo of De Queen sit outside on the University of Arkansas at Little Rock campus.

The number of students at Arkansas' colleges and universities took another tumble this fall with overall enrollment dropping 1.8 percent since the fall of 2016.

Preliminary enrollment figures show that the state's higher-education institutions had a total of 163,529 students this fall, 2,958 fewer as compared with last fall, according to data from the Arkansas Department of Higher Education.

Among the different types of institutions, nursing schools -- those at Baptist Health Medical Center-Little Rock and Jefferson School of Nursing -- saw the biggest increase from 637 to 734 students, or 15.2 percent, while public community colleges saw the biggest decrease at 3.8 percent, from 48,467 to 46,615 students.

The figures are on par with what is happening nationwide: a modest decline each year, said Thomas Harnisch, the director of state relations and policy analysis for the American Association of State Colleges and Universities.

The sharpest declines were for four-year, for-profit universities mostly because of years of bad publicity over such things as student loan problems and doubts over the value of their degrees, he said, adding that public community colleges also experienced enrollment drops.

Arkansas Higher Education Department Director Maria Markham said this year's preliminary figures do not show an increase, as she would have liked, but because of Arkansas' improved economic conditions, she was not surprised.

"Our goal is not only to complete a higher percentage of students enrolled, but also to increase the amount of students served," she said. "We need more students."

Enrollment is the first step toward trying to build a more educated workforce. State leaders have said a more educated state will help them attract higher-paying jobs and improve the quality of life in Arkansas. It would also help in recruiting corporations to locate in the state.

In a report last month, the federal government said it expects enrollment at postsecondary institutions to climb 15 percent between the fall of 2014, the last year for which it has actual data, and the fall of 2025. The report estimated growth in all age groups, and higher growth among students who are black, Hispanic, Asian/Pacific Islander, or of two or more races.

For years, Arkansas has used enrollment as its main factor in funding public colleges and universities. But by fiscal 2019, which starts next July, that will change: Higher-education institutions will be gauged on how well their students move through their degree programs and how many of them graduate.

The change is an attempt to increase the number of students who graduate within six years, for which the state has consistently ranked below the national average. Nationally, about 59.4 percent of first-time, full-time students who started pursuing bachelor's degrees in the fall of 2009 graduated within six years, according to the National Center for Education Statistics' most recent data.

In Arkansas, 41.1 percent of the 12,927 students who enrolled for the first time at a public four-year institution in the fall of 2010 graduated within six years, according to the department. State officials are hoping to bump up the percentage of certificate- and degree-holders in the state to 60 percent by 2025, a main goal of Arkansas' master plan for higher education.

The preliminary count reflects how many students are enrolled as of the 11th day of school. It does not include students who may enroll in short-term courses that are offered throughout the semester.

Looking ahead, the Western Interstate Commission for Higher Education expects Arkansas' next boon in the number of high school graduates to be in 2024-25, with an increase of 9.5 percent.

For the most part, enrollment in Arkansas' public four-year universities has held steady with an increase of 2.8 percent over the past five years.

Preliminary figures for UAFS show a 0.8 percent increase, with 6,584 students last fall and 6,637 this fall.

UAFS saw increases in first-time, full-time freshmen, continuing freshmen and high school students, UAFS Chancellor Paul Beran said. Its concurrent enrollment -- the number of high school students who take college-level coursework for credit -- grew in part because of two regional workforce grants. The money from the state Higher Education Department helped create a program in cybersecurity and one in robotics for the high school students, he said.

The school has increased its "2+2" program offerings, which are those where community college students can complete bachelor's degrees in certain programs at their home institutions. One of those programs -- a bachelor's of science degree in organizational leadership -- was so popular that the university added a degree program for entering freshmen, he said.

"Our plan is to continue to try to grow very slowly," Beran said. "We are just now coming out of the tailspin of the recession. We are stabilizing into our normal environment."

Of the public four-year schools, the University of Arkansas at Monticello saw the biggest one-year decrease, at 10 percent, from 3,924 students last fall to 3,533 this fall. The open-admissions institution saw a 21 percent drop in concurrent students, with the number falling from 1,035 last year to 818 this fall, the university said.

Jim Brewer, the university's spokesman, said the Monticello university will have no comment until the numbers are finalized.

Arkansas' unemployment rate was 3.5 percent in August, lower than the nation's 4.4 percent, according to the U.S. Bureau of Labor Statistics.

Seven of the state's 22 public community colleges saw one-year increases between the fall of 2016 and this fall, with Southern Arkansas University Tech in Camden seeing a 30.8 percent increase, the highest among its peers. Arkansas State University Mid-South in West Memphis saw the biggest decrease at 14.9 percent.

At SAU Tech, the number of "core" students -- those taking on-campus classes or courses online -- held steady, but the students are taking heavier course-loads, said Kimberly Coker, the college's director of communications, public relations and grants. The college saw a big increase in its number of concurrent students. Preliminary counts show 374 such students this fall as compared with 29 last fall. Overall, the college's enrollment increased from 779 to 1,019.

The college has also added degree programs from which students can easily transfer to Southern Arkansas University in Magnolia. It also plans to start a Tech Scholars program, similar to an honors program, to include scholarships funded by donors from the school's foundation, and basketball teams next fall to help attract more students, she said.

ASU Mid-South saw its enrollment decrease from 1,836 last fall to 1,563 this fall, but the school had planned for it. Chancellor Debra West attributed the decrease to record-low unemployment, decreases in its secondary technical center enrollment and the area's declining population. The Memphis metropolitan area had a 4.2 percent unemployment rate in August, the bureau said.

"In this environment, we know we have to adjust how we do business and increase the flexibility of our course offerings in order to appeal to people who have full-time jobs, but who may be looking to change careers or advance up the career path they are already on," she said.

"As colleges adjust to this new normal, I think we will continue to see more innovative approaches to delivering quality education in a manner that is responsive to the unique needs and desires of the students we serve."

On Tuesday, the college will begin offering an 8-week mini term, with many of the courses available online, to make it more convenient for students, she said. The college is also working on developing fully online programs.

Markham said community colleges will be at the forefront of efforts to achieve many parts of the state's higher-education master plan, which includes working to enroll more adult and underserved students and to increase graduation rates by 10 percent by 2020.

To meet those demands, higher-education officials need to do a better job of recruiting high school students and getting adult students back into college, said Markham, the state agency's director.

Higher Education Department recruiting efforts include use of Arkansas Future and Workforce Challenge grants. Arkansas Future grants, which started this year, are "last-dollar" awards, meaning students must use federal and other state aid before they are eligible to receive these grants. Workforce Challenge grants, which will start next fall, will use excess state lottery money to help pay for students to train in short-term industry professions, such as truck driving and as certified nursing assistants.

"Probably the most important thing we're doing doesn't have anything to do with funding models," Markham said. "It's about what we are able to offer students as far as incentive to attend. We have kind of a multipronged approach to closing those attainment gaps: we are providing students with the financial resources to attend, and we are making sure the institution has the services there to make [the students] successful." 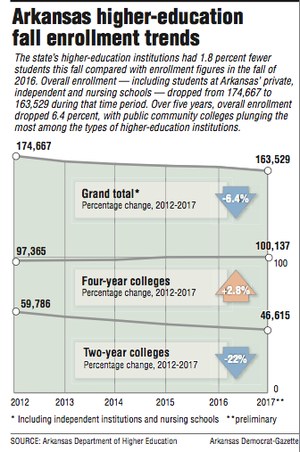