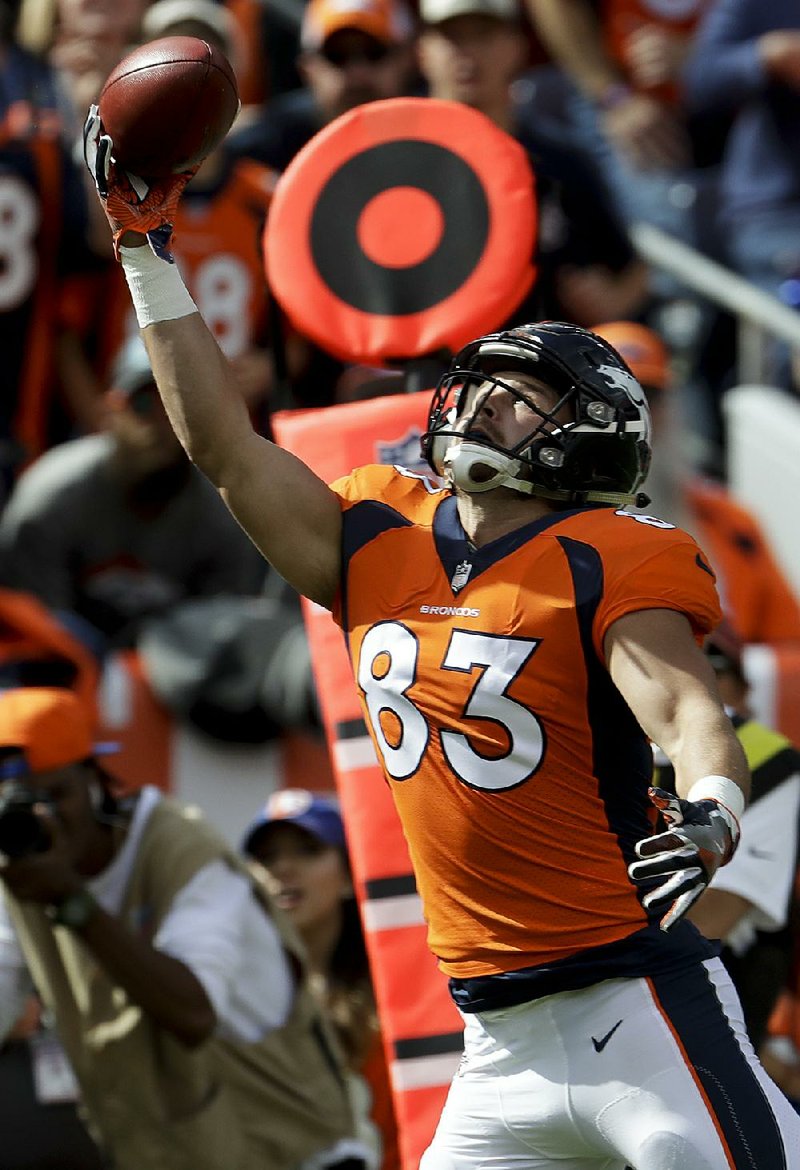 Denver Broncos tight end A.J. Derby (Arkansas Razorbacks) catches a touchdown pass during the first half of Sunday’s game against the Oakland Raiders in Denver. The Broncos defeated the Raiders 16-10.

They limited Lynch to 12 yards on nine carries and sent Carr to the locker room with a back injury in their 16-10 victory over the Oakland Raiders on Sunday.

Safety Justin Simmons' interception of EJ Manuel at the Denver 8 in the closing minutes sealed Denver's victory, which sent them into their bye week at 3-1.

The Broncos found themselves in danger of frittering away an AFC West slugfest they had dominated when Riley Dixon's punt traveled just 37 yards to the Oakland 42 with 4:16 remaining.

Manuel heaved a high toss to Amari Cooper just after the two-minute warning but Simmons came down with the ball just shy of the goal line and took it out to the 8. The Broncos then ran out the clock.

Broncos Coach Vance Joseph said he is happy with the team's run defense and run offense, but his team still has a glaring deficiency.

"My issue with our football team right now is we make a lot of critical errors," he said.

Like the ones that forced them to stall four times in the red zone, miss a chip-shot field goal and the half-dozen penalties, including one that negated a 64-yard punt return.

"That has to stop," Joseph said.

Oakland (2-2) had cut its deficit to six on Giorgio Tavecchio's 38-yard field goal with 5:23 remaining. That came after Brandon McManus hit the left upright from 29 yards out after nailing kicks from 28, 36 and 46 yards.

The Raiders couldn't do much against Denver's fortified front seven that also stuffed Melvin Gordon, Ezekiel Elliott and LeSean McCoy.

Add in Lynch, and that foursome managed 96 yards on 49 carries and zero touchdowns.

Carr said he'll get an MRI today to be sure, but he noted he was in plenty of pain and not looking forward to the flight home.

"I tried to get down. As soon as I got down, I don't know what happened," said Carr, who grabbed for his lower back. "It happens so fast out there. I got blasted pretty good."

Carr, noting he's eternally optimistic, predicted he'll return next week. But he was unable to loosen up in the locker room and throw without pain, so he watched his backup try to engineer a comeback.

"I thought EJ did a great job coming in in a tough situation," Carr said.