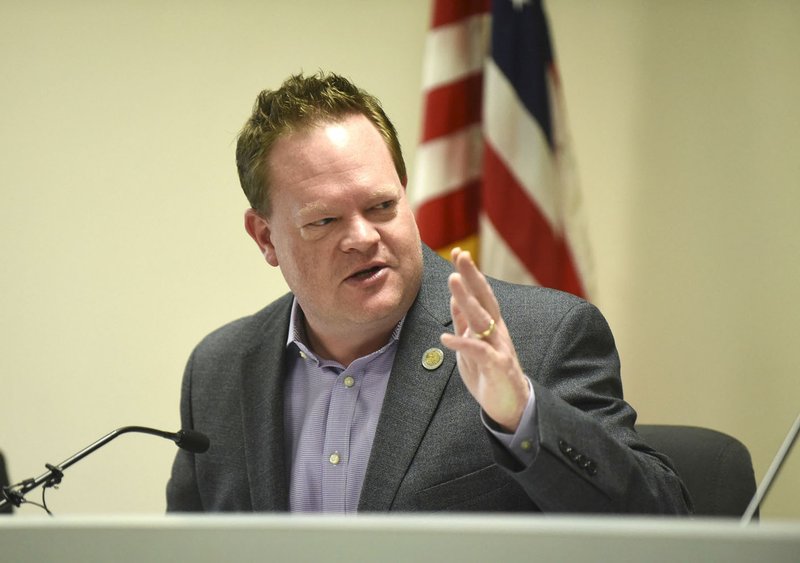 Rogers Mayor Greg Hines comments Friday at a special meeting of the Rogers City Council regarding the annexation lawsuit. - Photo by Flip Putthoff

ROGERS -- The city gave up its attempt to annex a disputed parcel of land west of Arkansas 112 on Friday during a special meeting of City Council.

Rogers will proceed Tuesday with an annexation election on smaller parcels on its northwest borders. Early voting in Rogers has already begun.

Don Zimmerman, executive director of the Arkansas Municipal League, said he hadn't heard of an election situation exactly like this but imagines any votes collected for the western parcel of land in the Rogers election simply will not be counted.

"If it's already on the ballot as a separate question from eastern parcels and is no longer contiguous because of the land annexed by Bentonville, then it seems to me that they just won't count," Zimmerman said.

Mayor Greg Hines said the election regarding the western land was called off because of Circuit Judge Brad Karren's ruling Thursday dismissing a Rogers challenge to a recent annexation of part of the property into Bentonville. Hines said because the ruling allowed the annexation of part of the disputed parcel into Bentonville to stand, it would be impractical for Rogers to provide services to the remainder of the proposed annexation area.

Rogers' council voted Aug. 22 to hold an annexation election so it could obtain about 3,175 acres west of the city. The largest portion included nearly 2,838 acres between Rogers and Highfill.

Bentonville's council on Sept. 12 unanimously approved the requests of 39 property owners to annex into Bentonville. The area cuts a 2 mile long and one-quarter mile wide chunk out of a 4.4-square-mile area Rogers had hoped to annex.

Thursday's hearing was in response to a motion to dismiss the lawsuit filed by George Spence, Bentonville city attorney. The judge ruled Rogers lacked standing and failed to state a sufficient claim against Bentonville.

Hines said he didn't agree with the court's decision but accepts it.

Proceeding with the election for what was left of the western parcels would have created a Rogers "island" cut off by Bentonville. Hines said that would make it impossible for Rogers to provide planning and infrastructure services to the isolated area.

"It creates way more problems than solutions and makes it impractical to serve the western portion," Hines said. He also mentioned a deep disappointment in the lack of regional collaboration among cities. "I miscalculated that the city to the west of us would play this way."

When reached Friday afternoon Cave Springs Mayor Travis Lee hadn't yet heard of the Rogers action and said he honestly didn't know what that meant for his city's election to annex parts of the western parcel. Lee said he would have to consult with the city attorney first.

"We just want to close the city off because it's a couple of islands at the moment," Lee said, referring to the city's interest in the land. Lee said Cave Springs' City Council met and voted for an annexation election in response to a number of landowners who expressed interest in living in the city rather than Rogers. He speculated annexation by petition may be a possibility if the election is cancelled.

Hard voters in Rogers and Cave Springs approved the same land for annexation, a third election involving just the residents of the annexation area would have been held to determine which city would get the property.