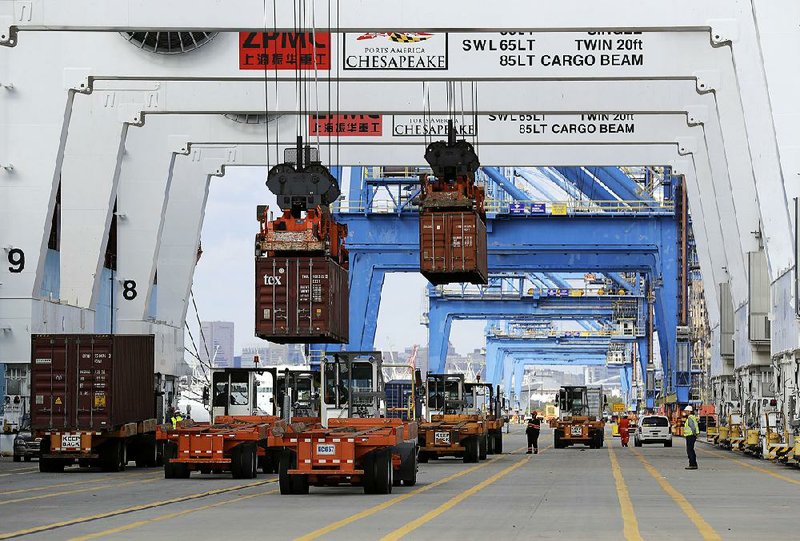 Shipping containers are unloaded at the Port of Baltimore in 2016. The United States this year has run a trade gap of $405.2 billion through September.

WASHINGTON -- The U.S. trade deficit rose in September to $43.5 billion as imports grew faster than exports.

The Commerce Department said Friday that the September trade gap in goods and services was up from $42.8 billion in August. Exports rose 1.1 percent to $196.8 billion, the highest level since December 2014. But imports rose more: up 1.2 percent to $240.3 billion.

A trade deficit means that the United States is buying more goods and services from other countries than it is selling them. A rising trade gap reduces U.S. economic growth.

Through September, the United States has run a trade gap this year of $405.2 billion, up more than 9 percent from a year earlier. The gap has widened even though a weaker dollar has made American-made products less expensive in foreign markets and encouraged exports.

President Donald Trump views America's trade deficits as a sign of economic weakness. He blames them on bad trade deals and abusive practices by China and other trade partners. Conventional economists argue that trade deficits are largely caused not by flawed trade agreements or cheating by particular countries but by a bigger economic force: Americans spend more than they produce, and imports have to fill in the gap.

In September, the United States ran a surplus of $21.9 billion with the rest of the world in the trade of services such as banking and tourism. But that gain was overwhelmed by a $65.4 billion deficit in the trade of goods.

Responding to remarks by Trump, a Chinese spokesman on Thursday said the country never intentionally sought a trade surplus with the United States and that some frictions are inevitable.

Trump on Wednesday said the U.S. trade deficit with China was "through the roof," calling it "so big and bad that it's embarrassing saying what the number is."

"We have never intentionally pursued a trade surplus. The current pattern of China's trade cooperation with other countries, including the U.S., is determined by the market," Hua told reporters at a daily briefing. "In the process of rapid development of bilateral trade and economic relations, it is inevitable for us to encounter some frictions and differences."

Trump arrives in Beijing on Tuesday for a visit as part of a 10-day swing through Asia. Trade and market access for U.S. products are expected to be high on the agenda.

The United States ran up a $347 billion trade deficit with China last year. That was a decrease of 5.5 percent after hitting an all-time high of $367.2 billion in 2015, although it is still far and away the largest the United States has with any country.

Print Headline: Trade gap rises to $43.5B in September