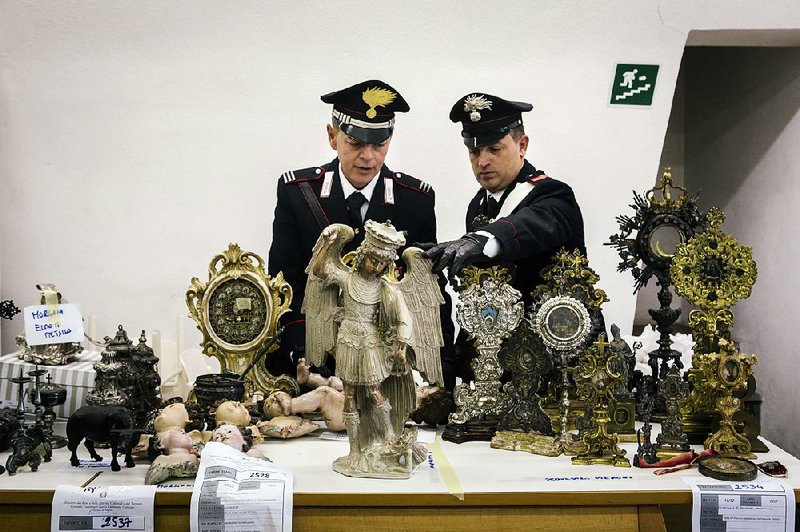 Members of Italy’s art theft police unit examine a stolen 16th-century statue of the archangel Michael and other religious artifacts they’ve recovered after months of investigations at their headquarters in Naples, Italy. The country’s 60,000 churches are a vast trove of artwork and artifacts, and protecting them from theft is a full-time task.

MONTERODUNI, Italy -- The recent return to Monteroduni of a 16th-century statue of the archangel Michael -- stolen by thieves some 20 months earlier -- was a heartfelt affair.

A marching band led a procession through the narrow streets of the town, in the Molise region, about two-and-a-half hour drive from Rome. The band was followed by a religious confraternity in full regalia, as members of the military police's art-theft unit carried the statue to Monteroduni's main church.

With a sizable portion of the town's residents marching happily in tow, children popped balloons and scattered confetti, bells rang joyfully and some older residents wiped away tears of joy.

"Evviva San Michele," came a cry from the crowd.

If Monteroduni's 2,000-plus residents had ample reason to celebrate the return of the statue of the town's patron saint, the agents who recovered the artifact were even more ecstatic.

The investigation that led to its recovery, and that of objects stolen from dozens of churches throughout Italy and abroad, turned out to be "one of the most important operations in recent years," said Paolo Albano, the chief prosecutor of the nearby town of Isernia, who coordinated the case.

But the inquiry also underscored the fragility of Italy's ecclesiastical patrimony, scattered among the country's more than 60,000 churches, a treasure trove that includes masterpieces by Titian, Michelangelo and Caravaggio as well as statues and precious artifacts such as chalices, candelabras and countless illuminated manuscripts.

Of the 449 thefts registered last year by the military police's art-theft investigative unit -- the Carabinieri for the Protection of Cultural Heritage -- just under half occurred in churches.

The isolation of many churches makes them hard to protect from such thefts. Closing churches is one option, but for the Roman Catholic hierarchy, "a closed church is a loss," said the Rev. Valerio Pennasso, director of the Italian Bishop Conference's national office for ecclesiastical heritage.

So dioceses do what they can to keep churches open -- for the faithful and tourists -- even outside liturgical hours.

The church isn't sitting by idly in the face of thefts, however.

Since 1996, Italian clerics have been called on to photograph and document their churches' assets, which have now been cataloged in an nationwide database, a census that Pennasso said is about 78 percent complete.

Any objects that disappear are also added to the Carabinieri's own database of stolen art, which at more than 1.2 million images is the largest such catalog in the world, said Gen. Fabrizio Parrulli, who leads the Carabinieri corps.

Guidelines have been drafted to better protect churches from theft and vandalism -- with suggestions such as having volunteers monitor churches, substituting valuables with copies and fixing artifacts in place.

And about 20 years ago, the bishop's conference began setting aside just over $22,000 a year to help churches install alarms, safety measures such as barriers and closed-circuit television cameras.

At the same time, many churches have transferred their most precious artifacts to local diocesan museums, where security systems are generally more advanced.

That was not a viable option for the archangel statue in Monteroduni, an object of devotion that had been prominently placed in the main nave so that people could pray before it.

"People here never thought of the statue in economic terms," said the Rev. Paolo Paulin, the parish priest. "It was always a thing of the heart and affection."

The church, St. Michael the Archangel, had no surveillance cameras or alarms, and on Jan. 19, 2016, someone casually strolled in and made off with the slight statue, just under 2 feet tall, as well as the silver-plated shield and sword of another sculpture depicting the archangel.

"This is a town where everyone knows each other, and we couldn't ever conceive that such a crime could happen," said Gabriele Biello, secretary of the Confraternity of St. Michael the Archangel.

After the theft was made public, two residents of the town said they had seen "suspicious characters" lurking near the church. The Neapolitan Carabinieri, who had been investigating daytime thefts in churches in nearby towns, showed photographs of suspects to the witnesses. One man was positively identified.

That initiated a "classic investigation," said Capt. Giampaolo Brasili, head of the Naples branch of the art-theft squad, which carried out the inquiry -- including tails, wiretaps and, eventually, searches of warehouses and homes in several Italian regions.

Around 20 people are under investigation, including suspected thieves, dealers, middlemen and collectors. Agents and prosecutors are continuing to pursue leads.

"We don't know if we've broken up the most important ring in Italy" of stolen ecclesiastical objects, Brasili said. "But it was certainly important."

Wiretapped conversations among the dealers led to some of the collectors -- who were identified in the phone calls as "the cardinal" -- and in particular to one in Ciampino, a town on the outskirts of Rome.

In May, the Carabinieri raided several apartments in Ciampino tied to this "cardinal," a setup that Brasili described as more like a hoarder's lair than an art collector's home. "There were objects amassed everywhere, so many that you couldn't see or enjoy them all," he said.

Investigators would not say whether the collector knew he was buying stolen goods, although Brasili noted that "ecclesiastical objects were created to be in a church -- a chalice in [someone's] home sounds off."

Hundreds of the man's artifacts were confiscated and compared with those in the database kept by the Carabinieri, which included the three Monteroduni treasures. More than 100 of them had been stolen, and agents are examining the others to determine their provenance.

As it happens, the first of these confiscated objects to come up as a match was the Monteroduni statue.

The statue, along with the shield and sword, was returned to Monteroduni on Sept. 29, the patron saint's day. It was placed in a side chapel during Mass after the procession, but at nightfall Paulin retired it to "a safe place."

"Clearly, we can't leave things of value inside the church," he said, "because there will always be scoundrels around."