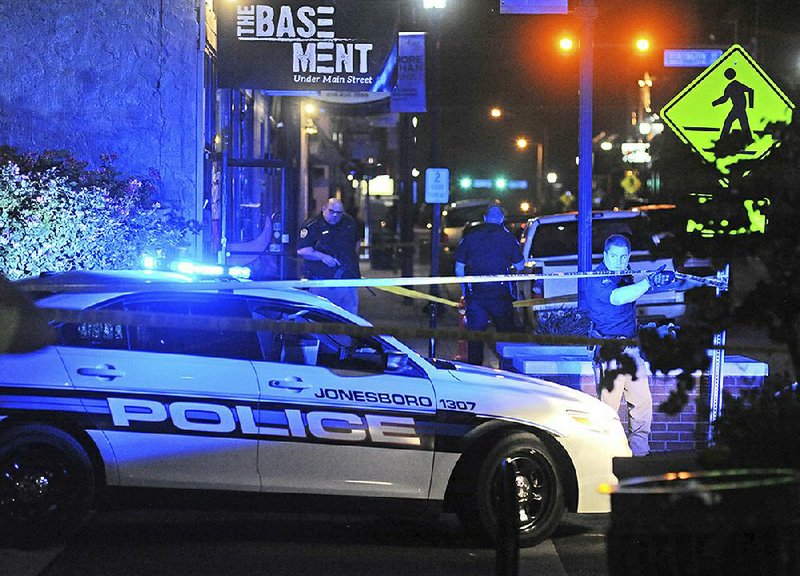 An officer lifts crime scene tape Sunday morning to let a police cruiser through at the scene of a fatal shooting in downtown Jonesboro. One person was killed and six others were injured.

Lane and Chauncey Jovon Thomas, 19, of Jonesboro are accused of killing Monterio Barnes, 18, of Jonesboro and injuring six others after they shot at several people during a party early Sunday morning in downtown Jonesboro, according to police.

Authorities said Lane and Thomas were attending an event at The Basement, a 6,000-square-foot party area below a Jonesboro business at 311 S. Main St. The event featured three rap musicians and DJ "King Vick" and was scheduled to last from 10 p.m. Saturday until 2 a.m. Sunday.

Barnes was killed at the scene.

Brandon said paramedics took the injured to Jonesboro hospitals. She did not know their conditions Monday, but said five of those injured had been treated and released by Monday afternoon.

In Facebook posts Sunday, Lane said he did not shoot anyone at the party.

"The rest of my life just gone over some [stuff I didn't] do," he wrote on his Facebook page.

Lane complained about police following his girlfriend and posted a picture of a Jonesboro patrol car. He also suggested someone else did the shooting in another post and said Jonesboro police "gotta work for me."

Video police obtained of the shooting taken by a person at the party showed otherwise, Brandon said.

"We processed the video and we consider [Lane] to be one of the shooters," she said.

This is the third homicide in Jonesboro this year.

"An event like this is just devastating, obviously for the loved ones of those involved, but it rocks the community as a whole," Perrin said in the statement. "It saddens me that in Jonesboro we are not immune to the problems that plague our society at large."

Several businesses have been housed at 311 S. Main St. over the years. Restaurants have served food there and at one time it was a community dinner theater.

The Compass, a multicongregational offshoot of the Southwest Church of Christ in Jonesboro, has held Sunday services there since January.

Members met across the street from The Basement and prayed at the site.

"We decided to stand up against that and pray for the victims, the families and for our city," Harrell said. "Jesus weeps over what happened. Jesus did not intend for us to have a life like this.

"We prayed for Monterio Barnes' mother who woke up Sunday and didn't have a son on Mother's Day."