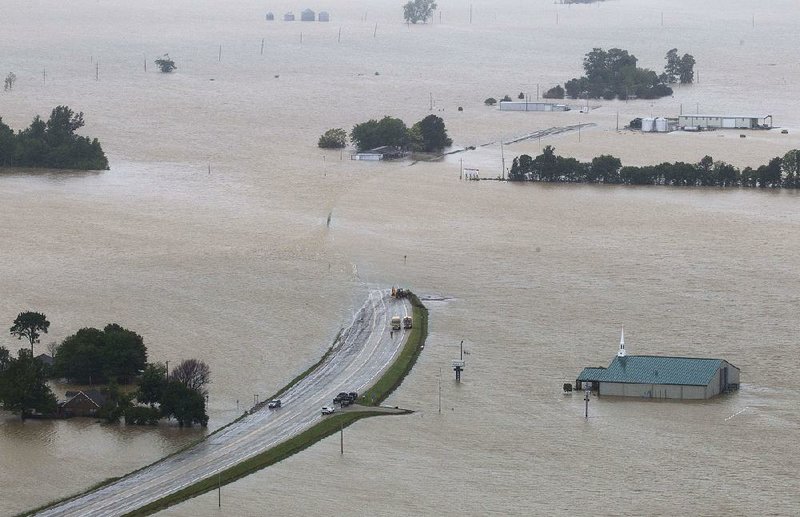 Flooding from the Black River has closed U.S. 67 near Elnora, south of Pocahontas, in Randolph County. Floodwaters are slowly receding in parts of Randolph and Lawrence counties, giving officials their first look at some of the damage. - Photo by Benjamin Krain

Water slowly began receding from flood-ravaged Randolph and Lawrence counties Thursday, giving officials their first glimpse at the damage left by the flooding Black River and several breaches along a levee system that protected a portion of Pocahontas.

The Arkansas Highway and Transportation Department opened a section of U.S. 67 from Pocahontas northeast to Corning on Thursday afternoon that had been closed since Monday because of high water.

"I will finally get to go home," said David Jansen, the county judge for Randolph County, who lives east of Pocahontas.

U.S. 67 from Pocahontas south to the Lawrence County border remained closed as up to 4 feet of water continued rushing over the roadway, pouring from nine breaks in the Black River levee. Officials kept U.S. 63 east of Portia closed as well, although most of the water there had receded from the highway.

After heavy storms roared through northern Arkansas last weekend, the Black River rose to 28.95 feet in Pocahontas on Tuesday evening, breaking the previous high mark of 28.4 feet set in April 2011.

At least seven people died in weather-related incidents across the state. Two others are missing and presumed dead because of the weather.

Teams also scaled back a search for a man who fell from a canoe in the Buffalo National River on April 26, according to Buffalo National Park spokesman Caven Clark. Searchers in two boats checked the river for the canoeist Thursday but did not locate him, Clark said.

Much of northern Arkansas received 4-6 inches of rain over the weekend, spawning flash flooding in creeks and rivers.

Also over the weekend, southern Missouri received 10 inches of rain that flowed into the Current River north of Van Buren, Mo., causing the river to rise there to record levels.

The water made its way downstream where it poured into the Black River, east of Pocahontas. The onslaught topped the 28-foot-high, 8-mile-long levee system there, causing three major sections and six minor portions to fail, and sending the rush of water south. Water poured into the Running Water Ditch, crossed U.S. 67 near the Shannon community in Randolph County and flooded thousands of acres, mostly farmland, to the north and east of Walnut Ridge.

John Thomison, the county judge for Lawrence County, toured sections of his county Thursday morning as the water began to recede.

"We've got a little bit of breathing room," he said. "We are realizing what a tremendous amount of water has come down. We're hoping it is stabilizing."

Still, at least 4 feet of water covered U.S. 67 north of Walnut Ridge. Several Pocahontas police officers who volunteered to help with water rescues in the area launched a boat from Pocahontas and made it by water to Lawrence County, some 6 miles to the south, before reaching land.

The National Weather Service reported that floodwaters spread up to 9 miles wide in some areas.

Portia Mayor Kelly Duckworth spent Wednesday evening and Thursday morning watching anxiously as water began encroaching on her town from the east. Portia sits on the eastern side of the Black River, and several houses have river water lapping against them on the western edge of town.

"We had water coming from the broken levees on the east side," Duckworth said. "I was afraid we were going to be surrounded by water."

"It was nerve-wracking," Duckworth said. "It was dark, and you really couldn't see much as the water was going up. I was worried for our town."

About half of the 437 people who live there had left after Thomison suggested a precautionary evacuation of the town.

Water made its way Thursday along the Running Water Ditch south through Clover Bend and eventually back into the Black River about 10 miles downstream from Black Rock.

Judy Taggart, manager of the Steve Jones Mallard Lodge in Clover Bend, said floodwaters were encroaching on a skeet-shooting range and acres of fields behind the lodge, but the lodge was safe.

"The field looks like a running, flooding river," she said.

Gov. Asa Hutchinson called reports about the receding water "good news" and said he expects the area to be declared a federal disaster area, making it eligible for federal assistance.

"Once the water starts receding, then we will look at the damage assessment, which is a critical next step," Hutchinson said. "We already know that there's significant damage ... to businesses, in addition to the individual homes that have been flooded."

Hutchinson flew over Randolph and Sharp counties Tuesday to inspect the flooding.

In Pocahontas, officials reopened U.S. 67 on Thursday across the Black River bridge, giving residents access to a Wal-Mart Supercenter, some restaurants and other businesses in eastern Pocahontas, some of which flooded.

Tara Maupin, manager of the Pocahontas Posey Patch, said she and store workers moved supplies from their store near the Black River to a building about a mile away on higher ground Monday and reopened at the new location a day later.

The store at the original location had 19 inches of water inside by Wednesday morning, she said.

Mary Haynes left her home in eastern Pocahontas on Sunday when officials issued a mandatory evacuation order for a neighborhood of about 150 homes just south of the Black River. She has been staying at a church.

It's the second time this decade that her home has flooded. In 2011, levees broke and her home on Douglas Street received about 4 feet of water inside. Haynes was not allowed back into her neighborhood Thursday because water was still too high.

Jansen said about 70 percent of the neighborhood was still underwater. He said flooding had destroyed at least 50 homes.

"I couldn't believe it," Haynes said when she realized that her home would flood for the second time since she bought it. "I thought the levee would hold. If water just topped over it, it wouldn't have been as bad. But when it breached, the water came all at one time."

She said she doesn't have flood insurance and doesn't know what she will do when she can return to her home.

Jansen, who has gone through similar flood events in 2008 and 2011, said the latest flooding has taken a more emotional toll on him.

"Each flood is different," he said. "I'm taking this one harder. You see all those people with losses, and you realize they are victims of circumstance. We tried to do the right thing with the levee, but you can't beat Mother Nature."

Officials now are watching the White River rise as it takes water from the Black River.

The White River reached 28 feet at Georgetown in White County on Thursday evening, flooding Arkansas 36 and cutting the town off. Flood stage there is 21 feet.

"People are boating in and out of Georgetown," White County Office of Emergency Management coordinator Tamara Jones said. "The town is an island. People are used to it, though."

She said several Georgetown residents have moved and are living in recreational vehicles at the White County Fairground in Searcy. Others are boating from Georgetown to dry ground, buying groceries and then boating back to the town and their homes.

"This will take a long while before it dries up," Lewis said of the flooding. "It's a very slow process."

Information for this article was contributed by Bill Bowden and Brian Fanney of the Arkansas Democrat-Gazette.