Trail of Tears to be marked with historic signs 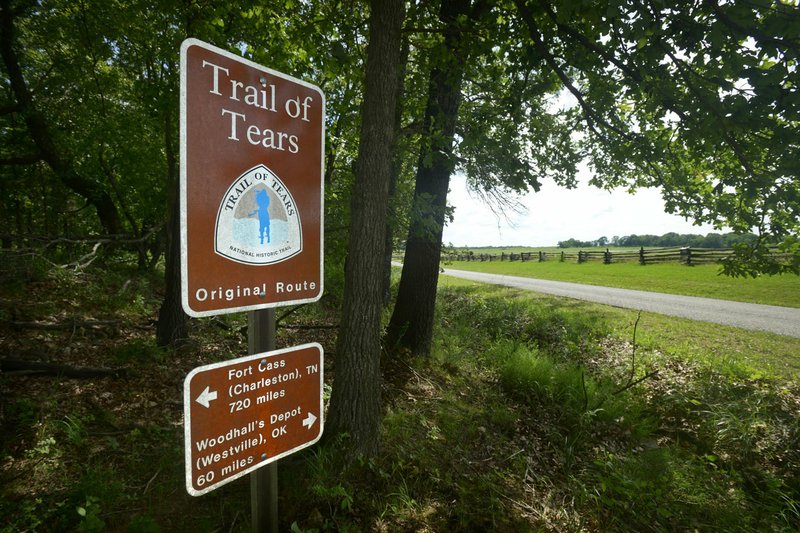 The Trail of Tears has footsteps across Benton and Washington counties, and one group wants to ensure those steps are not forgotten.

The ride is 950-mile trek that retraces the northern route of the Trail of Tears. It spans seven states and ends in Tahlequah, Okla., on June 22. The 12 participating cyclists will ride through Pea Ridge National Military Park on June 20. Park officials will fire a canon in honor of the ride. The inaugural ride was in 1984.

“Each year the Cherokee Nation hosts a Remember the Removal Bike Ride for young Cherokees to retrace the northern route of the Trail of Tears, so that our tribe and our young people never forget the hardships faced by their ancestors and strength we carry with us even today,” Cherokee Nation Secretary of State Chuck Hoskin said.

Cherokee Nation Secretary of State Chuck Hoskin, in a statement, expressed support for the signs.

"The Cherokee Nation supports enhancing historic signage along the Trail of Tears routes in Arkansas if it brings more awareness and education about our forced removal. We commend the National Park Service and National Trail of Tears Association, as well as the Arkansas chapter, for continuing to research the routes and places that centered on this dark chapter in our history," Hoskin said.

The initiative is statewide, but will begin with placing markers at specific locations in Northwest Arkansas. The purpose is to remind people of the trail's complex history, McLarty said.

The federal government forced the Cherokee to move from their homes in the Appalachians to Indian Territory, which is now Oklahoma.

"The story of the Cherokee is one of determination, perseverance and rebuilding," McLarty said. "They would have preferred to stay in the Appalachians, but they are actually thriving in Oklahoma."

The signs will be placed along roadways, in parks and on parts of the Razorback Greenway. McLarty hopes the first three signs will be placed in Pea Ridge National Military Park by June 20, which is when the Remember the Removal bike team will ride through the park. The team rides the Trail of Tears' northern route in remembrance of the forced removal.

Kevin Eads, superintendent of the National Military Park, welcomes the new signs and the association's efforts.

"They're great partners, and we've really enjoyed working with them," Eads said. "I'm excited about getting some additional signs."

"We're supplementing those. There'll be more of them and they will be at some key locations," Eads said.

About 200 to 300 signs will be placed along the trail, and about 50 to 80 will be in Northwest Arkansas, McLarty said. It's unknown what the total project cost will be, he said.

The Park Service placed Trail of Tears signs in the 1990s, but those were for the Auto Tour route along numbered state and federal highways approximate to the actual trail. That route was done because it was more efficient to get permission to put up the signs from state highway departments, and also because research to identify a historic route was not complete, McLarty said.

"So much research has been done in the last eight to 10 years that the National Park Service has determined that they can identify and sign a more accurate route closer to the original route," McLarty said. "Now that we know enough of the original route, it's worth the effort to go to the meetings with cities and the counties."

The new signs will be for a historic route, on the actual paths that the Cherokee walked, said Cory Donnelly, landscape architect for National Trails Intermountain Region, a Park Service program.

"Our initiative, our focus, has changed in recent years. We are focused on signing the historic route," Donnelly said. "The Auto Tour route still exists, but we have found it's more powerful to have a historic route."

The Park Service will place Trail of Tears signs in all nine states the historic trail runs through, working with partners that range from city to county municipalities to private citizens, Donnelly said.

Arkansas will be one of the first states to install the historic route signs, which will be placed on county roads, city streets and highways, McLarty said.

"Our project will take longer to get all the permissions," he said. "Every city it goes through, we'll need permission from that city. It's a lot of leg work. It's a two- to three-year project."

While the Park Service will pay for some of the signs, the association will raise the rest of the money from historical societies, chambers of commerce and various other sources, McLarty said.

The Trail of Tears cross the Razorback Greenway in four different places, which includes one in Bentonville, one in Springdale, one in Johnson and one in south Fayetteville. All four locations will receive a sign, McLarty said.

The Historic Route is a work in progress, Donnelly said.

"Before the trail was even designated we've had partners working on this for many many decades, and the research continues to happen," she said. "We have a designated alignment that was based on research."

"We go to local partners and find out what research was done and see if more research needs to be done before we mark the route," she said. "We try not to mark the Historic Route unless it is backed by solid research, which includes historic maps, historic journals."

McLarty said receipts from purchases made by the Cherokee along the trail has helped identify locations.

The 16,000 Native Americans who traveled the Trail of Tears in 1838 and 1839 were broken into 17 detachments. Four detachments went by river and 13 traveled to Oklahoma from various directions through Benton and Washington counties, McLarty said.

"The reason they were removed was because in the 1830s, President Andrew Jackson and the U.S. Congress passed the Indian Removal Act to have the tribes of the southern Appalachians moved by force if necessary," McLarty said. "The white European settlers wanted the land and the resources. It was all enhanced by the discovery of gold in northern Georgia in 1828."

The Cherokee were industrious, McLarty said. They lived in thatched huts, which McLarty described as wooden structures thatched with grass, and log cabins. He said they owned cattle, hogs, ferries and ran supply stores, and by the 1830s had been doing business with European settlers for 150 years. However, the European settlers were increasing in number and wanted land to build plantations.

Jackson had campaigned for Indian removal and signed the removal act on May 28, 1830, following what McLarty described as intense Congressional debate. The act authorized Jackson to grant unsettled lands west of the Mississippi for Indian lands within existing state borders, according to the Library of Congress website.

"About half the county was outraged by this. They didn't want it," McLarty said.

Intellectuals of the time such as Ralph Waldo Emerson decried the removal.

"It was politically controversial to remove all those tribes," McLarty said. "The bottom line was land and resources. The increasing European settlers wanted the land, wanted the plantation and wanted the gold. But it was not without extreme protest, not only from the Indians, but a large portion of the white European population were against removal."

There were Cherokee who saw the writing on the wall and left the Appalachians for Oklahoma, but the 16,000 who refused were removed by federal troops and the Georgia militia.

"The roundup started on the front porch of every Cherokee cabin. They were brought to these detention camps in Georgia, Alabama and Tennessee and held in these camps, and then they were to be escorted to Indian territory," McLarty said.

The first four detachments that went by boat had a difficult journey on the Mississippi and Arkansas rivers during a fiercely hot summer.

"The water was low. They couldn't make it all the way to the Indian Territory. They were hitting ground," McLarty said.

The remaining 13 detachments learned of these difficulties and pleaded and petitioned to travel by land. The Cherokee traveled by foot and on wagon through harsh winter conditions, and 4,000 died from sickness, starvation and winter conditions.

The Cherokee did not let themselves be defined by death and despair, instead thriving in the land that would become Oklahoma, McLarty said.

"Because they are so industrious and hardworking, they immediately started doing okay," McLarty said. "The first years were rough, but within a decade they were raising crops and hogs and trading with Fort Smith and Fayetteville."

Print Headline: Trail of Tears to be marked with historic signs