Today's Paper Obits Digital FAQ Newsletters Local Elections So It Goes With Joe What's Up! in NWA Crime Razorback Sports Today's Photos Puzzles
ADVERTISEMENT
Dubious distraction Monarch butterfly advocates at odds over whether milkweed plots in US help or hinder the cause by ADRIAN HIGGINS The Washington Post | July 29, 2017 at 1:51 a.m. 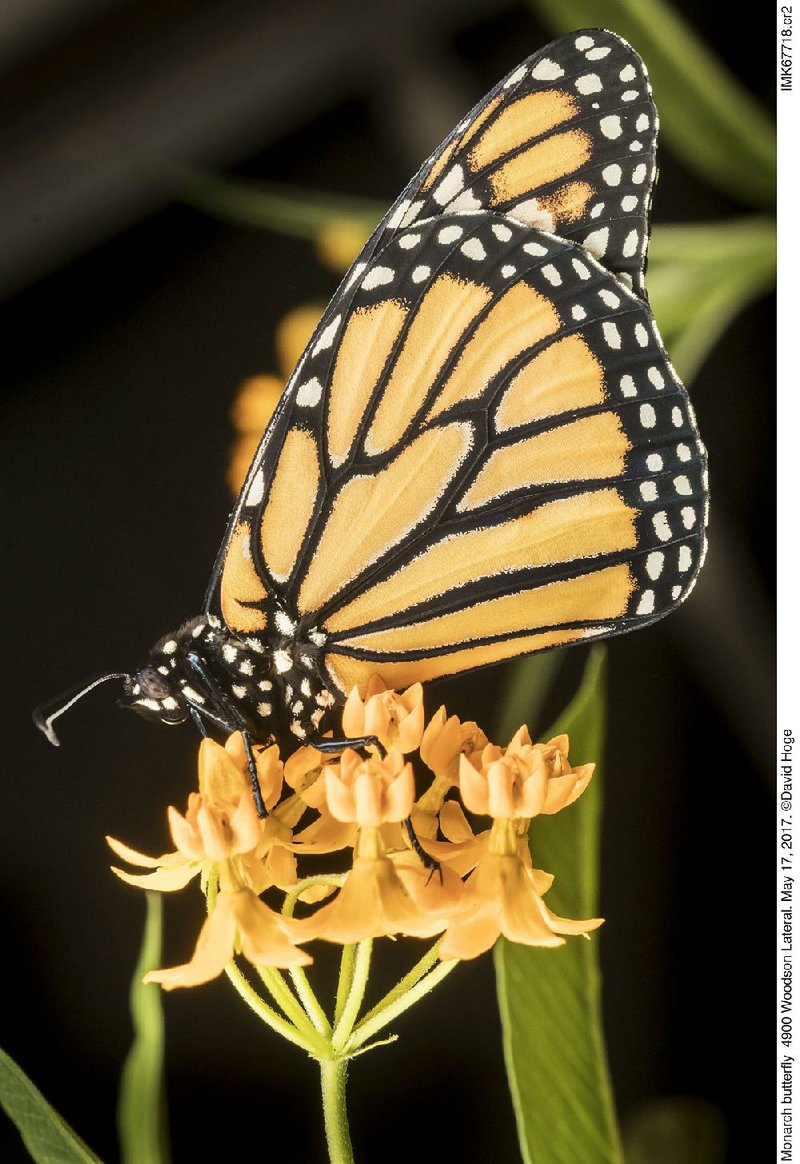 A monarch butterfly feeds on tropical milkweed. Some ecologists are suggesting that tropical milkweed may be contributing to the decline of the monarchs because extensive garden plantings in balmy Gulf States are causing monarchs to get sidetracked on their southward migration and that this is contributing to the spread of a pathogen that is killing or weakening the monarch.

The brutish common milkweed, not a choice garden plant, is setting its strange pods now that its muddy pink blooms are waning, but other milkweeds are still flowering, and in a prettier way.

The vivid orange clusters of butterfly weed are lingering in the heat, and the swamp milkweed is erupting with its creamy white blooms. Both are native perennials that deserve a place in a sunny garden, the former for dry sites and the latter for tricky, moist to wet areas.

The milkweed is linked in nature and in our imagination to one iconic insect, the orange and black-veined monarch butterfly. The caterpillar takes up the poisons in the milkweed, rendering the monarch unpalatable to most predators. As miraculous as this is, the monarch can seem infuriatingly absent now for the gardener who wants to nurture this pollinator.

This has to do with the monarch's nomadic nature. As every schoolchild knows, each winter the monarchs cluster by the millions in the mountainous oyamel fir forests of central Mexico and then head north for summer breeding grounds in northern states and Canada. On their spring migration, they use the milkweeds not just for nectar but as a food plant on which to lay eggs. Many make the perilous journey to adulthood, grow wings, and then also head northward.

By late summer, these magnificent butterflies notice the shorter days and begin their epic migration back toward Mexico. In the mid-Atlantic region some linger, sup nectar and may lay more eggs in the hope of getting another generation on the wing in time for winter south of the border.

I love to watch them in the garden in the clear blue light of September, when they seem to rise and fall with a single flick of the wings and with none of the mad frenzy of smaller butterflies.

In spite of its familiarity, the monarch has become a poster insect for the decline and threats facing all pollinators in an age of climate change, pesticide-driven agriculture and habitat loss. The phenomenon of their winter assembly makes tracking their numbers relatively easy, and the numbers have crashed. Once, hundreds of millions would overwinter in such abundance that the tree boughs would bend. By 2014, the population had dropped to an estimated 34 million. In the past two years, the numbers have rebounded -- last winter it was up to 145 million -- but the overall trajectory is one of unmistakable decline.

As part of the rallying for the monarch, gardeners have been encouraged to plant milkweed to provide a host-plant corridor across the insect's vast range.

An ecologist at Cornell University, Anurag Agrawal, doubts the practical value of this horticultural trend. He is the author of the newly published Monarchs and Milkweed. Agrawal says that although milkweed habitat has been lost, there is still plenty of wild common milkweed out there, especially in the eastern United States. Planting milkweed in your garden "is a really feel-good thing, but it's not really the conservation solution," he said.

But that shouldn't stop gardeners from planting it, he says. "You get to watch this incredible biology unfold. Maybe the single most important thing we can do for conservation in general is to give people an appreciation of nature."

Jeffrey Glassberg, president of the North American Butterfly Association, agrees. "All the stuff that the problem with monarchs is there aren't enough milkweeds is pretty dubious," he said, adding that gardeners should still plant it.

What's at the root of the monarch's decline? Glassberg is inclined to think it's the degradation and loss of the overwintering territory in Mexico and the widespread contemporary use of a class of pesticides called neonicotinoids, an issue linked to problems with honeybees and other bee species.

The other debate with monarchs and milkweeds comes down to a tender milkweed species from Mexico known as tropical milkweed. This is a stunning plant, with bushy blue-green foliage and clusters of red and yellow flowers that just keep coming until the first frosts. "My take is the tropical milkweed is spectacularly beautiful, very easy to grow, and monarchs love it," Agrawal said.

So what's the problem? Some ecologists say that the extensive garden plantings in balmy Gulf States are causing monarchs to get sidetracked on their southward migration and that this is contributing to the spread of a pathogen that is killing or weakening the monarch.

My horticulturist friend Janet Draper says this double whammy may not be confined to the southern edge of the United States. In October, I was in her Washington garden ablaze with tropical milkweed (and much more) and well stocked with monarchs that were in the process of taking nectar and laying eggs on the milkweed. She showed me caterpillars and chrysalides. If they ever stood a chance of overwintering here, they were doomed by the subsequent appearance of the disease parasite Ophryocystis elektroscirrha. Mortified that she had been the agent of this, she resolved not to grow tropical milkweed this year.

Agrawal says there may be a problem in the Gulf States with tropical milkweed as a contributor to the disease. "The definitive long-term study hasn't been done," he said. "The evidence at hand suggests some caution."

At the North American Butterfly Association's National Butterfly Center in Mission, Texas, he said, "tens of thousands of monarchs migrate through our property, which is loaded with tropical milkweed."

Glassberg can conceive of a day when the remaining fir forests and overwintering grounds in central Mexico -- now down to a few acres -- are wrecked by climate change and this once-great natural spectacle will vanish. In that event, the monarchs will probably overwinter on the Gulf Coast, and tropical milkweed "may turn out to be the thing that saves the monarch," he said.

If you want to grow it in the Mid-Atlantic region and are worried about it harming the monarch, you can rip it out in late August. Draper points out that this is when it's just about hitting its stride.

Agrawal, who lives in Ithaca, N.Y., is unperturbed by the sight of caterpillars that clearly won't make it before the frosts of fall.

"Up here, if they don't start flying south by Sept. 15, they won't make it to Mexico," he said. "But in October, they're here, caterpillars, butterflies. They're the living dead, but that's just how the biology works." 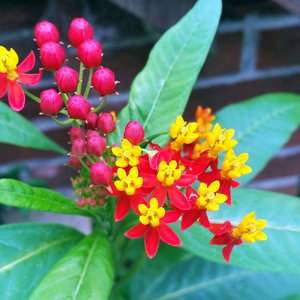 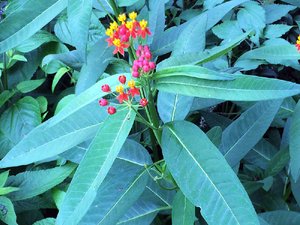 Photo by The Washington Post/ADRIAN HIGGINS
Gardeners love tropical milkweed for its beauty, but some observers fear it could be harming rather than helping the monarch. 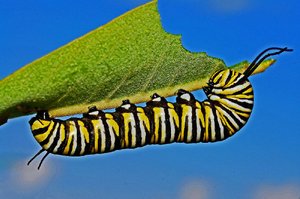 Photo by Handout
A monarch caterpillar munches on milkweed. 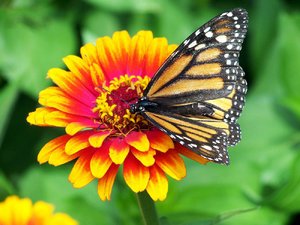 Photo by Handout
While monarch butterflies require milkweed to lay their eggs, they also stock up on nectar from other flowering plants. 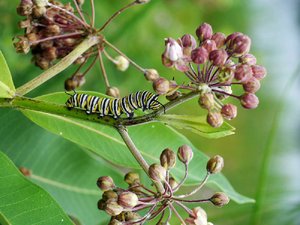 Photo by Special to The Washington Post/ANURAG AGRAWAL
In his new book, Monarchs and Milkweed, Anurag Agrawal explains how monarch caterpillars can eat the toxins in milkweed and become poisonous to most predators without harming themselves.