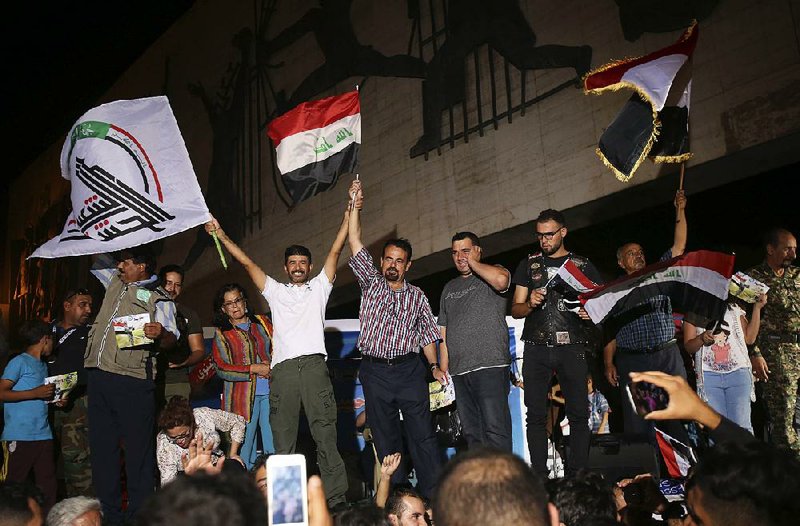 MOSUL, Iraq -- Iraq on Monday declared "total victory" over the Islamic State in Mosul, retaking full control of the country's second-largest city three years after it was seized by extremists bent on building a global caliphate.

"This great feast day crowned the victories of the fighters and the Iraqis for the past three years," said Prime Minister Haider al-Abadi, flanked by his senior military leadership at a small base in western Mosul on the edge of the Old City area. Iraqi forces had backed the last pockets of Islamic State militants against the banks of the Tigris River.

"From the heart of the liberated city of Mosul with the sacrifices of Iraqis from all the provinces, we announce the major victory for all Iraq and Iraqis," al-Abadi said.

Al-Abadi alluded to the brutality of the battle for Mosul -- Iraq's longest yet in the fight against the Islamic State -- saying the triumph had been achieved "by the blood of our martyrs."

Mosul has become the city where the Islamic State's territorial goals have crumbled. Although the group is likely to hang on to the core of its proclaimed caliphate for months yet, the military tide appears to be turning in favor of a U.S.-led coalition of forces fighting the group in Iraq and Syria.

The battle to recapture Mosul was the deadliest and most difficult in the ongoing coordinated campaign against the extremist group. Before the later stages of the fight, Iraq's elite counterterrorism force had suffered a 40 percent casualty rate, according to a May report from the office of the U.S. defense secretary. Iraq's army, federal police and government-sanctioned militia forces also suffered significant losses.

The nearly nine-month campaign, which was backed by airstrikes from the U.S.-led coalition, left thousands dead, entire neighborhoods in ruins and nearly 900,000 displaced from their homes.

Western districts have been pummeled by coalition airstrikes, Islamic State suicide bombs, and shelling. The areas most recently retaken resemble a gray sea of rubble.

Shortly after al-Abadi's speech, the coalition congratulated him on the victory but noted that parts of the Old City still "must be back-cleared of explosive devices and possible ISIS fighters in hiding." ISIS is an acronym for the Islamic State.

Al-Abadi began his victory tour of the city on Sunday, congratulating commanders as the counterterrorism troops cleared the final pockets of Islamic State resistance. As he spoke Sunday night, it appeared that fighting was continuing between Iraq's army and the militants in the final sliver of contested territory.

Earlier in the day, airstrikes pounded the last Islamic State-held territory on the western edge of the Tigris, Humvees rushed the wounded to field hospitals, and soldiers hurriedly filled bags with hand grenades to ferry to the front.

Iraqi troops slowly pushed through the narrow alleyways of the Old City during the past week, punching holes through walls and demolishing houses to carve out supply routes and fighting positions in a district where many of the buildings date back centuries.

For days, the remaining few hundred militants held an area measuring less than a mile, and Iraqi commanders described victory as imminent.

The drawn-out endgame in Iraq's fight for Mosul highlighted the resilience of the extremists and the continued reliance of Iraqi forces on air support to retake territory.

Iraqi commanders said gains slowed to a crawl in recent days as Islamic State fighters used their families -- including women and children -- as human shields. As the battle space constricted, the coalition began approving airstrikes, dropping bombs of 200 pounds or more on Islamic State targets within 50 yards of friendly forces.

Plumes of smoke Monday grew larger than the strip of territory under Islamic State control.

"Honestly, all this death and all this destruction, I don't believe it was worth it," he said.

Reports of civilian casualties also rose as Iraqi forces punched into Mosul's western half in February. Residents fleeing the fighting reported that entire families sheltering in the basements of their homes were killed by airstrikes targeting small teams of Islamic State fighters.

Thousands of civilians were estimated to have been killed in the fight for Mosul, according to Nineveh's provincial council. That did not include those still believed to be buried under collapsed buildings.

More than 897,000 people were displaced, and the United Nations said there was no end in sight to the humanitarian crisis in Iraq despite the conclusion of the fighting.

The U.N. said thousands of Mosul residents probably won't be able to return to the city because of "extensive damage caused during the conflict."

The infrastructure in western Mosul, where the fighting was fiercest, has been decimated. Iraq's civil defense rescue teams -- a branch of the Interior Ministry -- said about 65 percent of the buildings in the Old City were severely damaged or destroyed. In western neighborhoods like Zanjili, the destruction was estimated to constitute 70 percent of all houses, buildings and infrastructure.

Mosul fell to Islamic State militants in a matter of days in June 2014, starting a political and security crisis not seen in the country since the 2003 toppling of Iraqi leader Saddam Hussein.

The territorial gains by the extremists led to the ouster of Iraq's top leaders, dramatically shifted the balance of power among its security forces, empowered Iranian-backed fighters who are now sanctioned by the central government, and drew U.S. ground troops back onto Iraqi soil for the first time since 2011.

The road to retake Mosul has taken the government, its security forces and the coalition more than three years of training troops to replace the tens of thousands of Iraqi troops who fled in the face of the 2014 Islamic State advance.

That summer, Islamic State leader Abu Bakr al-Baghdadi appeared at Mosul's al-Nuri Mosque and declared a caliphate on territory it seized in Iraq and Syria.

Last month, as Iraqi troops closed in on the Old City, the militants destroyed the al-Nuri Mosque and its famous leaning minaret to deny the forces a symbolic triumph.

Information for this article was contributed by Susannah George of The Associated Press; and by Louisa Loveluck and Mustafa Salim of The Washington Post.