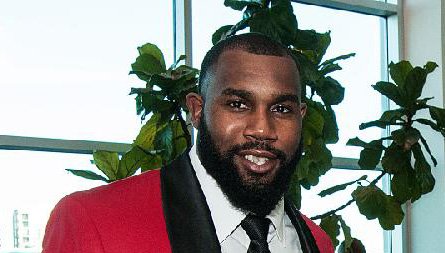 Darren McFadden is shown in this photo.

Attorneys for Darren McFadden, the Dallas Cowboys running back and former Arkansas Razorback who has filed three federal lawsuits over the management of his finances 10 years ago, have asked to put one of those cases on hold.

In a recent filing, the attorneys conceded that out-of-court arbitration may be required as a result of an arbitration agreement signed years ago by both parties.

McFadden sued Ameriprise Financial Services Inc. on May 12, alleging that as the employer of his former business manager, Michael Vick of Little Rock, the company should be held responsible for what McFadden said was Vick's misappropriation of millions of dollars.

Vick, who has denied the allegations, is also facing a separate 2016 lawsuit filed by McFadden, a former friend. In addition, McFadden has filed a third suit against Vick and his sister, Jacqueline Vick, and her husband, Cheo Clark, alleging that the former adviser transferred assets to his sister with the intent to hide them from McFadden.

Darren McFadden through the years: Click here for larger versions

In the lawsuit against Ameriprise, McFadden accuses the company of being negligent and of actively concealing Vick's actions as he "manipulated ... Darren McFadden at a young age to seize broad and sweeping control over all of [McFadden's] professional income, assets and retirement savings, only to then methodically commandeer and misappropriate millions of dollars from [McFadden] over the course of eight years."

On Friday, attorneys Grant Fortson and Ryan Younger of the Quattlebaum, Grooms & Tull law firm in Little Rock, which is representing Ameriprise, filed a stipulation on behalf of all parties noting the existence of the arbitration agreement and Ameriprise's contention that the claims are subject to the Federal Arbitration Act.

"Accordingly, based upon Ameriprise's contentions, and for purposes of judicial economy, the parties stipulate that all claims in this case may be compelled to arbitration before the Financial Industry Regulatory Authority (FINRA). The parties further jointly stipulate and agree this action should be stayed pending arbitration."

The stipulation also calls for McFadden to submit his claims to the authority within 90 days of the date that U.S. District Judge James Moody Jr. imposes a stay.

McFadden's 2016 lawsuit against Vick is still pending before U.S. District Judge Kristine Baker. McFadden has asked to amend it to add other defendants, including other companies owned or controlled by Vick; Simmons Bank, which is accused of allowing Vick to evade regulatory scrutiny by making more than 1,000 withdrawals from a McFadden enterprises account over 4 1/2 years; and Vick's wife, Carla, who the suit alleges was complicit in her husband's misappropriation of $3.5 million under the guise of a "Bitcoin project."

All the lawsuits seek compensatory and punitive damages.

McFadden was one of the most decorated players in the history of the University of Arkansas, Fayetteville before he was drafted by the Oakland Raiders.

The lawsuit against Ameriprise alleges that Vick, who had been hired by Ameriprise in 2001 after being fired by Merrill Lynch, recognized in early 2008 that McFadden "was on the precipice of being drafted to a lucrative NFL contract." It alleges that Vick summoned "mutual contacts and relationships" to induce McFadden to turn over management of all his financial matters to Vick, while portraying himself as a "seasoned financial adviser."

The suit alleges that Ameriprise allowed Vick to induce McFadden into signing "virtually the broadest and most sweeping Arkansas General Durable Power of Attorney ever contemplated, relinquishing to Vick the unfettered power and ability to control all of McFadden's income and financial transactions."

It alleges that over about eight years, Vick "systematically converted a substantial portion of McFadden's monies and assets for Vick's own personal use and gain."

The suit contends that in 2010, Ameriprise conducted a monthslong internal investigation of Vick that was "related to suspicious and unauthorized account activity" regarding McFadden's account. It said Vick was indefinitely suspended on Oct. 1, 2010, and then he "simply quit."

But instead of informing Ameriprise's clients, including McFadden, about any unauthorized activity and reporting Vick to regulatory authorities, Ameriprise "allowed Vick to fabricate a false pretext for why McFadden should transfer his accounts ... to other financial institutions, thereby allowing Vick to continue to maintain and manipulate full control and access to all of [McFadden's] income and assets," the lawsuit asserts.

The stipulation doesn't indicate how long it might take to resolve the claims through arbitration, but it asks Moody to enter an order "compelling this matter to [Financial Industry Regulatory Authority] arbitration and staying all further proceedings until arbitration has been completed."

There has been no significant activity in the case against Vick's sister and her husband since that suit was filed on May 26. It asks U.S. District Judge Leon Holmes to appoint a receiver to "take charge of the property" at issue.