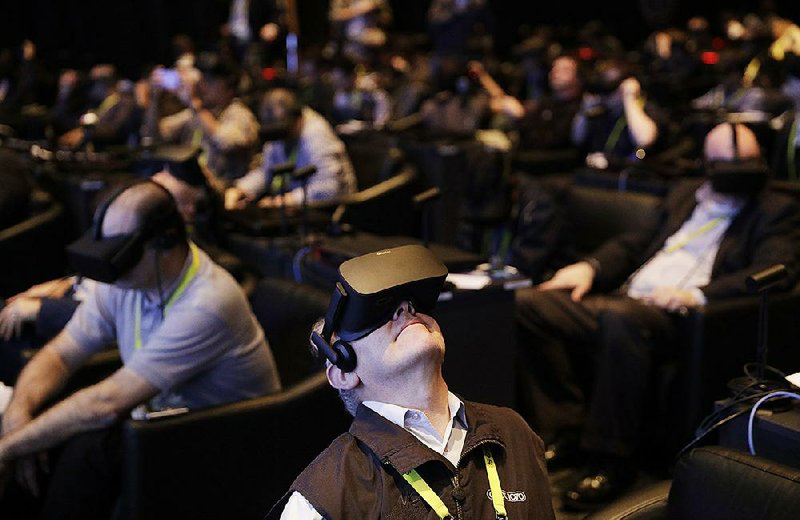 Alan Perry participates in a virtual-reality presentation during an Intel news conference earlier this month in Las Vegas. - Photo by AP / JOHN LOCHER

SEATTLE -- For a technology to crack the mainstream, there is an unspoken understanding: It shouldn't make the people who use it queasy.

And yet there was a reminder earlier this month, at the International Consumer Electronics Show in Las Vegas, of how far virtual reality has to go until everyone is ready to fasten 3-D goggles to their faces. At a news conference, Intel, the chipmaker, provided virtual-reality headsets to about 250 attendees so they could watch a 3-D video from the perspective of sky divers hurtling out of a helicopter in wing suits. Intel also passed out motion sickness bags to everyone, in case the demonstration made anyone nauseated, an unfortunate side effect of turbulent virtual-reality experiences for some people.

Laura Anderson, an Intel spokesman, said the company had provided the bags "out of an abundance of caution and to be tongue-in-cheek about our immersive experience." No one used the bags, she said.

It is time for a reality check for virtual reality, one of the most hyped technologies of last year. Sales of the most capable headsets have been sluggish by most estimates, held back by high costs, a lack of must-have content, and the complexity and awkwardness of the products. Less expensive mobile headsets that use smartphones as their screens are selling better, but are far more limited in what they can do.

Many technologists and early adopters of virtual reality remain unchanged in their conviction that the technology eventually will change how entertainment, including games and movies, is experienced by the masses. The major virtual reality headsets from Oculus, HTC and Sony went on sale to the public only last year, and those who thought they would find a large audience within months of release had unrealistic expectations, virtual reality's advocates say.

"This is going to be a long slog; as the technology continues to improve, more content becomes available and awareness increases," said Jan Dawson, an analyst at Jackdaw Research.

Virtual reality appears to be headed for a phase in the evolution of new technologies known as the "trough of disillusionment," said Sunny Dhillon, a venture capitalist at Signia Venture Partners, which has invested in virtual reality startups. According to the technology research firm Gartner, this stage of the hype cycle for new technologies comes after a period of inflated expectations, but before a phase in which their benefits become commonly accepted.

The excitement around virtual reality took a huge leap in March 2014 when Facebook announced it planned to acquire Oculus for $2 billion and the social network's chief executive, Mark Zuckerberg, suggested that virtual reality could be the next big thing in technology after mobile.

That deal sparked a wave of startups creating products for virtual reality and a related technology called augmented reality, which overlays digital imagery on a view of the real world, as seen through smartphones and headsets. Last year, $1.48 billion was invested in startups in that category, compared with $331 million the year before, estimated Pitchbook, a financial data firm.

Many of those startups were funded before major headsets went on sale to the public. Entrepreneurs raising money in the future are likely to encounter tougher questions about what kind of use their products are getting.

"All the major headsets have launched -- the numbers are coming in," said Alex Rosenfeld, founder of Vrideo, a startup that acted as a YouTube-like hub for virtual reality videos. "You're going to have some companies here that don't survive. If the industry is going to continue to attract dollars, there's going to have to be real numbers."

Vrideo was one of those that did not make it. Rosenfeld announced at the end of November that he was shutting down the company. He said investors were skeptical about whether Vrideo could compete against larger players like Google's YouTube and Facebook, not pessimistic about the overall future of virtual reality.

The companies that make the major headsets do not report their sales, but all of them said they were pleased with the results. SuperData Research, a technology research firm, estimated that Oculus had sold 360,000 headsets and HTC 450,000 since their products went on sale in March and June. Both of those headsets require high-end PCs with powerful processors.

The firm estimated that Sony, which began selling a virtual-reality headset in October, has sold about 750,000. Sony's headset was seen as a potentially big boost to the virtual-reality industry because it is less expensive than rival headsets and relies on a PlayStation 4 console, more than 53 million of which have been sold.

A bundle with the PlayStation VR headset and specialized controllers sells for $500, while comparable bundles from HTC and Oculus sell for just under $800 each. Less expensive Sony and Oculus headsets are available without controllers designed for virtual reality. Still, the Sony sales were fewer than SuperData and others had expected.

"The holidays were pretty disappointing for many in the industry," said Doug Renert, a venture capitalist with Tandem Capital. "I'm not all that surprised."

In a bright spot, Samsung said at the Las Vegas trade show that it had shipped more than 5 million of its Gear VR headsets, which act as a cradle for a mobile phone, with lenses that create a 3-D image from the phone's screen. Samsung often runs promotions in which it gives away a headset with the purchase of a Samsung smartphone.

Price drops on technology are likely to be a big factor in mainstream acceptance of virtual reality. On Jan. 9, CyberPower, a company that makes gaming PCs, began selling a $499 computer that can play virtual-reality content when used with an Oculus headset. That is hundreds of dollars less than the normal cost.