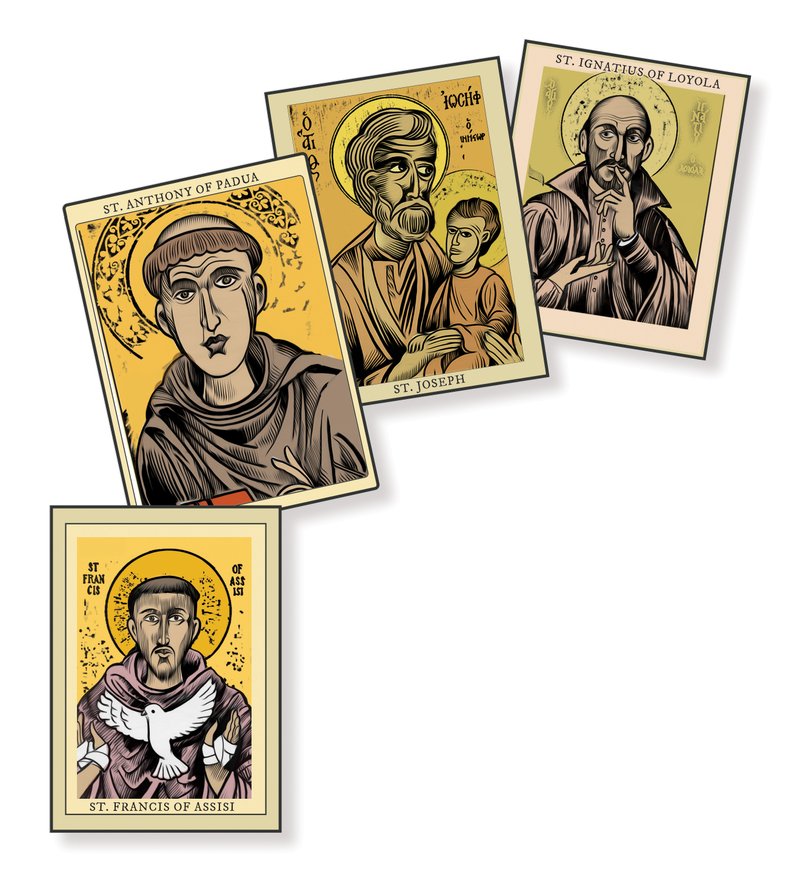 For Laura Humphries, St. Mary Magdalene is like a friend she can turn to in a time of need.

She can ask the saint to pray for her, just as she would ask a friend or family member to do.

"She is very important to me," said Humphries, parish life and stewardship coordinator at Our Lady of the Holy Souls Catholic Church in Little Rock. "I feel a connection to her because she was so close to Christ. It's wonderful and amazing that she had that relationship with him. She was singled out to be the first person to see him after the Resurrection."

Humphries also finds comfort in another St. Mary -- the Blessed Virgin Mary, the mother of Jesus. She talks to her as she would most any woman, mother to mother.

"Talking to them and knowing they walked the earth and that they were able to overcome hardships and doubts is inspiring," she said. "That's important and it helps me."

The role of the saints in the Roman Catholic Church -- as in the Orthodox Church -- has confounded some Protestants for centuries. It has also led to misunderstandings.

"Some misconceptions are that we think the saints are more important than Jesus and that we think saints do miracles, when all we are doing is asking for their prayers," said the Rev. James Martin, a Jesuit priest and author of My Life With the Saints, which was recently republished in a 10th anniversary edition.

"The big one is that we worship Mary as an equal to Jesus, which is ridiculous," he said.

Martin said what Catholics are doing is akin to asking a friend for prayer.

"This is just asking someone in heaven to pray for you," he said. "We ask the saints for prayer as we would someone in our church."

In his book, Martin explores the lives of saints who have been an important part of his life -- those who have inspired and challenged him.

"They've been examples for me," he said. "Every person has a group of people they look to as examples of the Christian life -- maybe a pastor, a teacher or a grandmother or grandfather. In my life it's been all of those things and also the saints -- people who have gone before us and shown us how to be Christian. Their stories are inspiring for me."

Martin said St. Peter, St. Therese of Lisieux and St. John XXIII are three in particular who have been important in his life.

"I would say St. Peter has been very important to me in terms of the way Jesus picked him, even though he knew he wasn't perfect," Martin said. "In one of the first Bible passages where Jesus meets him, St. Peter says 'depart from me, I'm a sinful man.' He knew it, too, and he continued to mess up a little bit and not quite get Jesus, and he denies ever knowing him at the crucifixion, and Jesus still forgives him.

"I think it's a great image of how, as one spiritual writer said, we come to God not by doing right but sometimes by doing wrong. I continue to come back to him."

St. Therese of Lisieux was a 19th-century French nun known as "Little Flower." Therese entered a Carmelite monastery at the age of 15 and envisioned a life of service as a missionary. Instead, she was struck with sickness, including tuberculosis. She detailed her spiritual journey in an autobiography, including her "little way" of doing little things with great love.

It's an idea that resonates with Martin.

As for St. John XXIII, Martin said he was drawn to him because the saint was always joyful, happy and funny. The former pope is credited with a joke about life at the Vatican that begins "How many people work at the Vatican?"

"And he said 'about half of them,'" said Martin, who is known for his wit, which he often displayed as the "official chaplain" of The Colbert Report.

Martin said the stories of the saints can show people that being a saint "means just being yourself."

"You don't have to try to be another person to be holy," he said. "You can be a mother with three kids and be a saint. You can be a lawyer, a teacher or a garbage man and define sanctity in your own way is what the saints show us.

"When people would come to work with Mother Teresa she would say, 'Find your own Calcutta.' That's what the saints do, and they also encourage us. You read the lives of the saints where they struggled with prayer or their families or health problems and say, 'I can do it too.'"

The Rev. Jason Tyler, priest at St. Joseph Catholic Church in Fayetteville, said he also finds inspiration in the saints. One in particular is St. Maximilian Kolbe, who was canonized as a saint in 1982 by Pope John Paul II (now St. John Paul II). Kolbe, a Polish Conventual Franciscan friar, was a martyr who was killed by the Nazis at Auschwitz.

"He gave up his life when another prisoner was about to be executed. He asked to take that man's place, and that man survived and died of old age," Tyler said. "That was a remarkable story."

St. Ignatius of Loyola, founder of the Society of Jesus (known as Jesuits), is another important saint for Tyler. He said the saints can help individuals looking for someone to identify with on their spiritual journey.

Tyler said there are patron saints for almost any profession or illness. The "patron saint" designation offers people a way to connect with a saint with similar struggles.

"They can help us in two ways," Tyler said. "We can learn about their life and how they lived out that call to holiness, because each of us is called to holiness. The second way is, again, looking for their prayers and asking them to pray for us and with us along the way."

"They are men, women and even children who are examples of centering their life on Christ," he said. "While they are not intermediaries between us and God, we look at them as examples of what is possible when we have our life grounded in faith."

Orthodox Christians are also connected to the saints in a personal way -- through their names.

"The idea is it connects us with the living history and life of the church by having a connection with a particular person from the Scriptures or the history of Christianity," Verdaris said. "It also serves as a spiritual connection. There's the understanding that the saint has a tender place in their heart for those named after them, so they pray for those named after them."

The saint also serves as a source of inspiration, with their life serving as an example and a call toward holiness.

Verdaris said Orthodox Christians named after a particular saint will have a party or celebrate on the feast day of their namesake saint. It's common to greet those celebrating with "Happy name day, many years," Verdaris said.

"In many countries it's bigger than one's own birthday," he said. "It's the day they've established a connection to beginning their new life in Christ. The connection is always there."

He said the saints of the church show that living a life of holiness is possible for everyone.

"It's not an elite class," he said. "The saints transcend every generation and walk of life."

Verdaris said Orthodox Christians don't worship the saints and they are in no way equal to God.

"We only worship God, but there's nothing wrong with having men and women as examples to inspire us," he said. "Sometimes people are a little hesitant, yet the idea of saints and sainthood comes from the very beginning. St. Paul speaks of a 'cloud of witnesses,' and here we have a relationship with some of the witnesses."

He said people often look for heroes in sports figures or movie stars, but they sometimes fail as role models.

"The saints, they got it right," he said. "They are always pointing beyond themselves ... always pointing to God. How wonderful to have that person who inspires you also directing your attention beyond, into the heavens and into the divine."