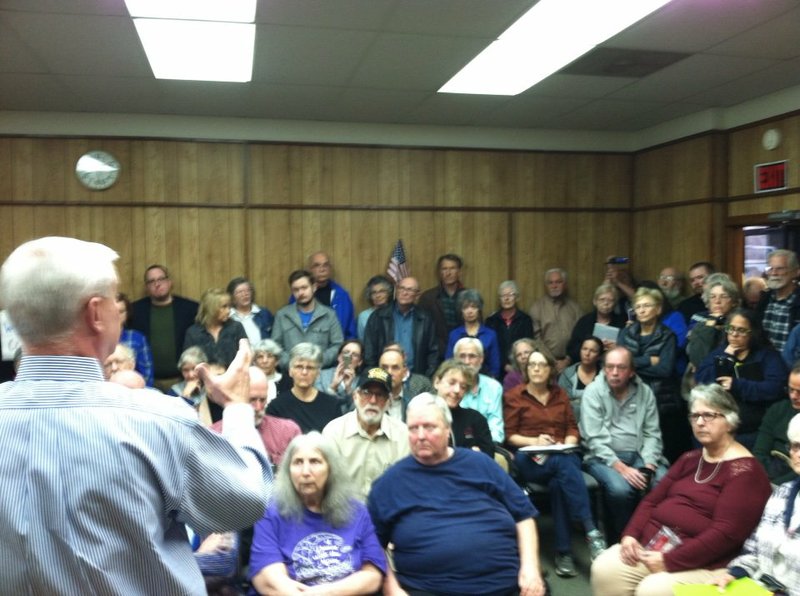 WEST FORK -- U.S. Rep. Steve Womack of Rogers told an impassioned crowd of more than 200 people Tuesday he was elected as a Republican to back a Republican view of government and that is what he will do.

Womack started his "coffee with the congressman" event, scheduled for 8:30 a.m., at least 10 minutes early as the crowd filled the West Fork City Hall's meeting room, packed the halls and poured out through the doors and into the parking lot. West Fork police had to clear the halls because of fire regulations.

These events with Womack have rarely had a crowd of more than 40 and were often attended by conservative groups making requests such as asking for the impeachment of then-President Barack Obama.

The most frequent question asked at the event was whether Womack would help "put a ring in the nose," as one constituent put it, to control President Donald Trump. At least two questioners asked if Congress would investigate the president's business ties with Russia.

Other members of the crowd told him to support the president and to make good on promises he has made to conservative supporters.

"Do what you were elected by a large majority to do and that the vast majority expects you to do," said Anthony Baughman of West Fork.

Trump did not win the popular vote nationwide, but he carried the 3rd Congressional District and the state of Arkansas by hefty margins, Womack reminded the crowd.