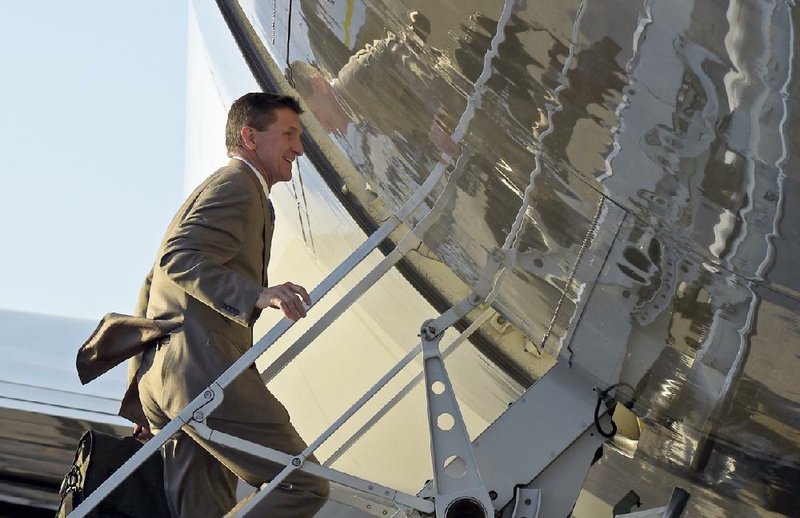 The White House continues to weigh its options after an appeals court last week upheld an injunction on Trump's immigration order, which would suspend the nation's refugee program and bar citizens of seven Muslim-majority countries from entering the U.S.

Stephen Miller, Trump's chief policy adviser and one of the architects of the order, maintained in a round of Sunday news show interviews that the president has sweeping executive authority when it comes to barring foreigners whom he deems a threat to the country. Miller said Trump will do "whatever we need to do, consistent with the law, to keep this country safe," and he criticized judges who have stood in the president's way.

"This is a judicial usurpation of the power. It is a violation of judges' proper roles in litigating disputes. We will fight it," Miller said in an interview on Fox News Sunday.

As for the administration's next steps, Miller said "all options remain on the table," including an appeal to the Supreme Court. Trump said Friday that he was considering signing a "brand new order" as early as today, one that's rewritten to try to bypass the legal challenges.

"As you know, we have multiple options, and we are considering all of them," Miller said on ABC's This Week.

The dispute over Trump's executive order comes amid an outcry from immigration activists over an enforcement surge by Immigration and Customs Enforcement officers that officials say is targeting migrants who are in the country illegally and have criminal records.

Advocacy groups contend the government has rounded up large numbers of people as part of the stepped-up enforcement. The federal agency said the effort is no different from enforcement actions carried out in the past.

Trump and Miller defended the action.

"The crackdown on illegal criminals is merely the keeping of my campaign promise. Gang members, drug dealers & others are being removed!" Trump tweeted.

Added Miller on NBC's Meet the Press: "We're going to focus on public safety and saving American lives, and we will not apologize."

The Trump administration on Sunday remained silent about reports that national security adviser Michael Flynn engaged in conversations with a Russian diplomat about U.S. sanctions before Trump's inauguration.

The report, which first appeared in The Washington Post, contradicted Flynn's previous denials, as well as those made by Vice President Mike Pence in a televised interview.

The FBI has been investigating Flynn's contacts with Ambassador Sergey Kislyak, according to multiple news reports. Agents are looking at whether Flynn tried to undermine the move by former President Barack Obama's administration to toughen sanctions against Russia after intelligence agencies concluded that it had meddled in the U.S. election.

Miller said it wasn't up to him to say whether the president retains confidence in Flynn.

"It's not for me to tell you what's in the president's mind," he said. "That's a question for the president."

Miller repeated in several interviews that the White House hadn't given him anything specific to say about Flynn. Miller called a report that Flynn had discussed U.S. sanctions in calls with Russia's ambassador "a sensitive matter" best answered by Trump, Pence or Chief of Staff Reince Priebus.

Since The Post published its report, the White House has passed up several opportunities to publicly back Flynn. Trump, asked about the report Friday, said he was unaware of it.

The White House's response adds uncertainty as the president deals with the aftermath of a North Korean missile launch, the first since Trump took office.

For most of Saturday, Trump and the Japanese prime minister played golf under the Florida sun to get to know each another and show the world the U.S.-Japan alliance remains strong. The surprise provocation by the North Koreans provided an example of the leaders' cooperation.

"President Trump and I myself completely share the view that we are going to promote further cooperation between the two nations," said Abe late Saturday. "And also we are going to further reinforce our alliance."

Trump followed Abe by saying: "I just want everybody to understand and fully know that the United States of America stands behind Japan, its great ally, 100 percent."

Miller said Sunday on ABC that the joint appearance marked "an important show of solidarity between the United States and Japan."

"Last night, what you saw was the president of the United States sending a powerful and unmistakable signal to North Korea and the entire world as he stood shoulder to shoulder with the prime minister of Japan and declared our steadfast and unwavering support of the alliance," he added on Fox News Sunday.

Trudeau will be at the White House at a time when many Canadians worry that Trump will enact protectionist measures that could hurt their economy, and that tensions could arise between Trudeau and Trump.

"We're going to talk about all sorts of things we align on, like jobs and economic growth, opportunities for the middle class -- the fact that millions of good jobs on both sides of our border depend on the smooth flow of goods and services across that border," Trudeau said.

Trudeau also said the two leaders are "going to talk about things that I'm sure we disagree on, and we'll do it in a respectful way. Canada will always stay true to the values that have made us this extraordinary country, a place of openness."

After Trump signed the executive order pausing entries to the U.S. from seven Muslim-majority nations, Trudeau tweeted that Canada welcomed people fleeing persecution, terrorism and war. Trudeau said of Canada that "diversity is our strength." His spokesman said Trudeau was looking forward to discussing Canada's immigration and refugee policy with Trump.

Roland Paris, a former senior foreign policy adviser to Trudeau, said there's no indication Trump views Canada as a problem or an economic adversary, but he added that Trump is unpredictable. Paris called it a very important moment in U.S.-Canada relations and said he's cautiously optimistic the two leaders will have a constructive relationship focused on economic ties.

"Canadians expect their prime minister to do two things: uphold Canadian values and to have an effective, constructive relationship with the president of the United States. That's a balancing act, and it's not necessarily going to be easy," Paris said.

Canada has not drawn Trump's criticism, but concerns about the countries' relationship remain.

"We're dealing with someone who has abused the Mexican president and the Australian prime minister," said Robert Bothwell, a professor at the University of Toronto.

Bothwell said Trudeau should avoid confrontation considering the stakes and how delicate the situation is.

"Most American presidents have been pretty level-headed. You have to go back to the monarchs of the Middle Ages or Roman Emperors. How does Nero feel today? Is his stomach acting up? What does the emperor decree?" Bothwell said. "We're back in the Roman empire. We haven't had anything like this."

Information for this article was contributed by Jill Colvin, Julie Pace and Rob Gillies of The Associated Press, and by David Lauter of Tribune News Service. 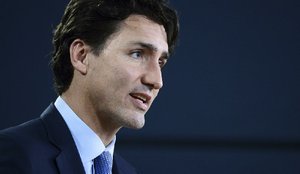