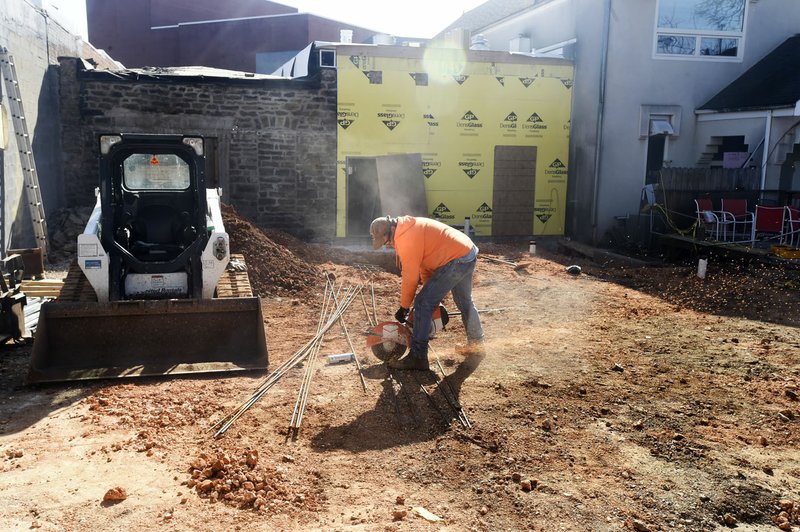 Daniel Campbell with Compass Construction of Prairie Grove works Friday in the back of the new Taco Bell Cantina/Pickleman’s Gourmet Cafe area that used to be Common Grounds’ space on Dickson Street in Fayetteville. - Photo by Michael Woods

FAYETTEVILLE -- Unforeseen issues can arise when moving into a 100-year-old building, the franchise owners of Taco Bell Cantina and Pickleman's Gourmet Cafe have learned. 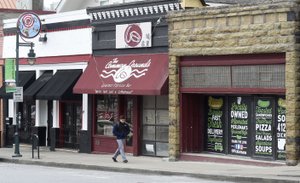 Photo by Michael Woods
A pedestrian walks past the old Common Grounds building Thursday on Dickson Street in Fayetteville. Crews are converting the old space to be the new home of Taco Bell Cantina and Pickleman’s Gourmet Cafe. Bringing in the franchises has required putting in floors, replacing the foundation, fixing the roof, a sewer line, electrical work and uprooting the back patio area for a new one, among other endeavors.

The building at 412 and 410 W. Dickson St. soon will become home to a major fast-food chain's budding concept and a regional soup, salad, sandwich and pizza shop. Residents commonly know it as the space that housed coffee shop and restaurant Common Grounds, which spent nearly two decades at the location.

• J.L. Mitchell opened a clothing store at 410 W. Dickson St. in 1904. Mitchell, famous for his line of gentlemen’s furnishings and haberdashery, died of Spanish flu in 1918.

Source: Once Upon Dickson by Anthony Wappel, Ethel Simpson

Bringing in the franchises has required putting in floors, replacing the foundation, fixing the roof, a sewer line, electrical work and uprooting the back patio area for a new one, among other endeavors.

So far, the city has issued several permits to the Taco Bell Cantina at 412 W. Dickson St. amounting to about $380,000 worth of work. A permit for work at Pickleman's at the 410 address includes about $140,000 worth of improvement.

Sam Fiori, president and CEO of K-MAC Enterprises, which operates Yum! Brands of Arkansas and eight other states, said it surprised him the building could stand on its own. He estimated the cost of construction on the Taco Bell Cantina side will be about $500,000.

Barring any further delays, the Taco Bell Cantina should open sometime in March. Pickleman's also should open in the spring.

"I just want to get the doggone thing open so we can move on," Fiori said.

A scaffolding erected last week in front of the Pickleman's side has since been removed. Crews temporarily moved some stone on the facade to correct loose mortar, franchise owner Allen Willis said.

"It was just repair work," he said. "We're going to try to leave everything that's got the original look to it intact as much as possible."

The facade on the Taco Bell Cantina side will get a new garage door, although it may not be open very often. Taco Bell has strict standards that go beyond Health Department requirements, Fiori said.

"If you have more than 10 flies in the store they're ready to shut you down," he said. "But those same Taco Bell people wanted us to leave the garage door in the plan, so we did."

When it opens, Fayetteville will boast one of the few Taco Bell Cantinas in the world. Four are in Las Vegas, Chicago, San Francisco and Austin, with about six others in the works, Fiori said.

The concept differs greatly from a typical Taco Bell. Frozen-drink taps, including margaritas and pina coladas and others with alcohol, an open-kitchen design and a tapas-style menu on top of the usual Taco Bell menu are a few of the features customers can expect.

Both restaurants will experiment with options, such keeping late hours to catch the bar crowd and placing heaters, fans and awnings outside so the rear patios can stay open most of the year. The Taco Bell Cantina might reserve a spot for musicians, Fiori said.

Seth Price, a University of Arkansas student who moved to Fayetteville from Detroit to go to school, said he felt the somewhat controversial Taco Bell Cantina will fit in well with the rest of downtown, even though a corporate entity will replace a popular local establishment.

"I have a couple of friends who liked this place because it's so historic and everything, but I don't really mind it," he said.

Will he check it out?

"Soberly? Probably not. But after some drinks? Possibly," he said.

Peggy and Jackie Hancock, who live near downtown, said they remembered going to the university in the early 1980s when everything on Dickson Street was local. They worried the rise of national chains such as Taco Bell, Chipotle, Waffle House and Q'doba will ruin downtown's unique sense of place.

"You want to think that when you come down here it's original -- like Dickson is original," Peggy Hancock said. "It would be like going into New Orleans' French Quarter and having all these Taco Bells and things opening up, and that's not what you expect there, either."

The city can't stop a business from coming in just because people don't like it, said Development Services Director Jeremy Pate. If the establishment matches up with zoning requirements and complies with city code, it's free to move in, he said. The nature of the business doesn't factor into the city's range of considerations.

"That's not ours to judge. We just make sure they comply," Pate said. "That's up to the users of the facility or the customers. If the citizens of Fayetteville don't want to support it, then they probably won't stay around very long."

The Hancocks didn't doubt the likelihood of the franchise's success. Affordable food with alcoholic beverages near a college campus usually equates to a favorable outcome, they said.

"I'm sure they'll try to keep the Dickson kookiness with it or whatever," he said. "But you just hear 'Taco Bell' and it's just like, 'oh my.'"

Peggy Hancock stood resolute in her stance on Taco Bell.

"I have an initial prejudice against it," she said. "If I hear things that make me want to go, then I will try it. But initially I'm going to be stubborn about it."

Print Headline: Taco Bell, sandwich shop to be in by spring