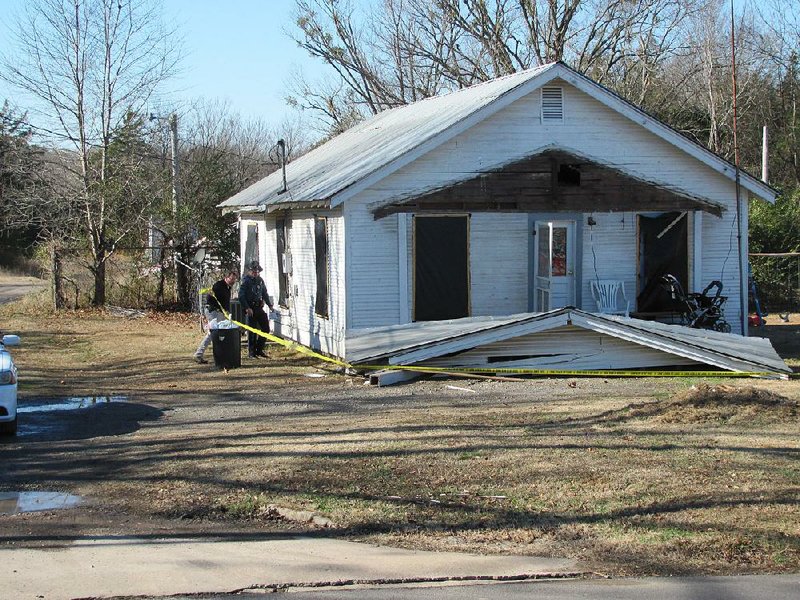 An Arkansas State Police detective and trooper begin investigating the early morning explosion and fire at a home in Paris. The front porch roof collapsed in the explosion.

A Paris man has been charged with murder in the death of a 2-year-old boy and is accused of covering up the death by causing an explosion and fire, Logan County Circuit Court documents say.

Ricky Lee Carter, 27, is charged with first-degree murder and arson in the death of Ryatt Reese. Bail was set at $1 million during a probable-cause hearing Friday, according to court records.

Ryatt was pulled from his home at 1704 S. Elm St. early Dec. 21 after the explosion and fire were reported to Paris authorities.

In an interview with special agents of the Arkansas State Police, Carter admitted that he yanked Ryatt's feet from under him, causing the child to hit his head, according to a probable-cause affidavit that accompanied the criminal complaint.

Ryatt began shaking, Carter said in the affidavit, and Carter attempted cardiopulmonary resuscitation on the boy "for a long time," the affidavit said. Carter then placed Ryatt on his bed and turned on the gas for about 45 minutes, then ignited a lighter, which caused the explosion and fire, the affidavit says.

The affidavit said the state medical examiner's office concluded from an autopsy that Ryatt died from "traumatic head and abdomen injuries."

According to the affidavit, the explosion and fire were reported to the Paris Police Department at 4:26 a.m. Carter told investigators that he injured Ryatt between 12:30 a.m. and 12:40 a.m., the affidavit says.

After the Paris Fire Department extinguished the blaze, the affidavit says, state police fire marshal investigators determined that the fire started in an area of the home where an igniting source did not exist and that the gas line where the fire started had to be manually turned on.

In his initial interview with investigators, Carter said he had put all four children to bed but that Ryatt went into his room, said he was sick and threw up twice, the affidavit says. After cleaning him up, Carter let Ryatt lie in his bed, and he fell asleep. Carter went into another room to watch television, the affidavit says.

At one point, he says in the affidavit, he lit a cigarette and the explosion occurred.

Carter changed his story and admitted injuring Ryatt when investigators told him that his story did not fit with what they had found and that Ryatt's death was not caused by fire, smoke inhalation or an explosion, according to the affidavit. 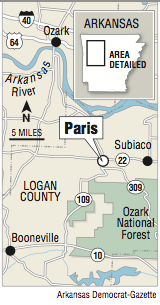 A map showing the location of Paris.