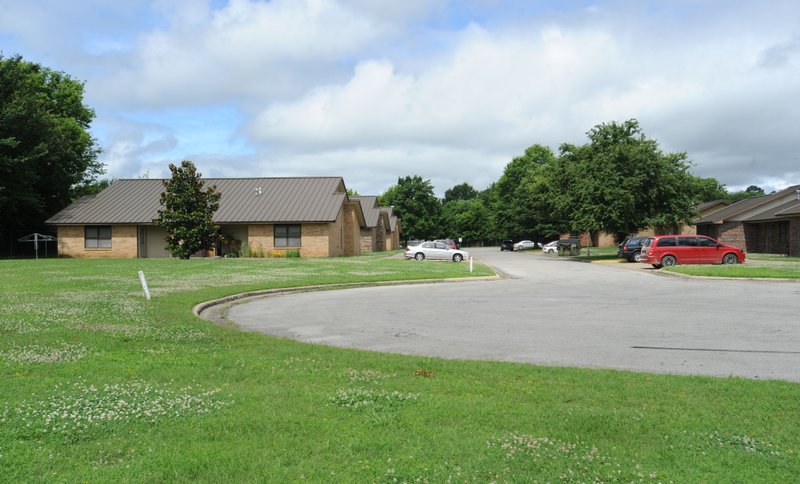 Morgan Manor, operated by the Fayetteville Housing Authority, is seen June 22 on 12th Place in Fayetteville.

FAYETTEVILLE -- The Housing Authority got approval Monday from the Planning Commission to expand an apartment complex it operates and now awaits word on whether it will get a tax credit to help pay for construction.

Commissioners voted 5-2, with two abstaining, on a development plan to bring 58 additional units to Morgan Manor, 324 E. 12th Place. The complex, operated under a form of Section 8 called the Rental Assistance Demonstration program, already has 52 units on about 9 acres. The expansion would sit on about 3 acres.

How commissioners voted on the plan to expand Morgan Manor:

The Rental Assistance Demonstration program mixes public and private equity to provide rental assistance to low-income residents. City Attorney Kit Williams on June 22 sent a letter to the U.S. Department of Housing and Urban Development asking if the Housing Authority followed federal rules and regulations in a plan to move residents from public housing.

Housing Authority officials decided to move residents living in public housing at Willow Heights, 10 S. Willow Ave., to an expansion on land it owns at Morgan Manor. A local electrician, Vlad Tatter, and his business partners agreed on a contract to buy the Willow Heights property for $1.25 million and build homes.

HUD responded Aug. 1, saying the Housing Authority met the minimum federal standards in the land transaction. In a memo, Williams advised the Planning Commission the expansion plan didn't violate a city ordinance or state or federal statute. Commissioners also couldn't consider the wisdom of the proposal, and the law considers denying a plan meeting minimum standards as arbitrary, Williams wrote.

The plan grew stiff opposition from neighbors and nearby residents. Bill Reagan, speaking before the Planning Commission during public comment, said the Housing Authority has proven itself as a poor steward of low-income households and the proposal makes no fiscal sense.

"Please deny the proposal because it is not good for Fayetteville," he said.

A tax credit would pay for a large chunk of the estimated $6 million to $8 million expansion at Morgan Manor. Housing Authority Director Deniece Smiley has said she expects to hear from the Arkansas Department of Finance and Administration by fall on whether the project has been approved. HUD still has to sign off the final transaction and plan.

Planning commissioners split on the plan, with much of the discussion focusing on street improvements, drainage and architectural renderings. Commissioner Alli Quinlan made a motion to required the developers to extend Wood Avenue about 700 feet to 15th Street, but the motion failed. Quinlan later voted against the proposal.

Commissioner Matt Hoffman, who also voted against, said he felt the buildings didn't meet the city's residential design standards and the breezeway entry was unsafe.

Chairman Ron Autry said the commission didn't take on the decision in a lighthearted manner. He spoke of the "human element" before casting his vote to approve.

"Basic comforts that we all take for granted, some don't have," he said. "It's a very difficult decision."

A City Council member could appeal the Planning Commission's decision, although the council would have to make its decision based on the same six criteria.