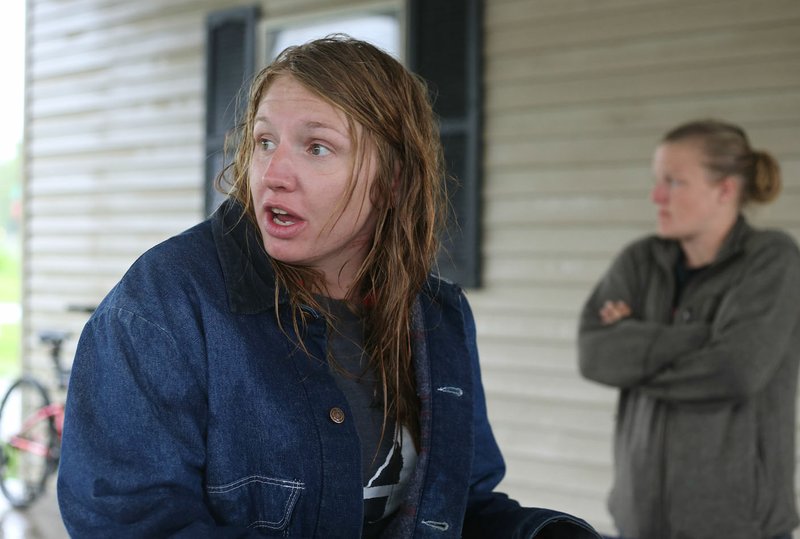 NWA Democrat-Gazette/DAVID GOTTSCHALK Jessica Hopkins sits Wednesday at the 7 Hills Homeless Center as she recounts the flash flood event that caused her to escape from the high water of Town Branch Creek earlier in the morning in south Fayetteville. Heavy rain caused flooding and submerged campsites and portions of the Razorback Greenway, including portions of the Town Branch section.

A torrent ran through Town Branch in south Fayetteville on Wednesday morning. Rushing water split a homeless camp near South School Avenue and Jessica Hopkins grabbed what's most important to her.

"I just made sure I had pictures of my girls," she said, sipping a hot cup of coffee at 7 Hills Homeless Center later in the afternoon. "I threw it in my pack and I walked away."

Go to 7hillscenter.org or drop off items at 1832 S. School Ave. in Fayetteville. Needed items include tarps, sleeping bags, tents and blankets.

Hopkins, 29, has three daughters ages 2, 7 and 9, who have been adopted by her parents. She last saw them in August. They recently sent her pictures and letters in the mail.

The Texarkana native spent the winter rehabbing at Decision Point in Bentonville. She came to Fayetteville last spring. Flooding is a new sensation to her, Hopkins said.

Just about 3 inches of rain fell between midnight and Wednesday afternoon at the municipal airport.

About an inch of rain fell in one hour soon after Hopkins woke. The ground couldn't hold any more rainwater, creating runoff, and streams can only take so much. The camp is on both sides of College Branch, which heads north from Town Branch just a couple blocks from 7 Hills.

Fayetteville firefighters responded to at least five calls for rescues Wednesday. One of those was from Tony Barger, 41, who lives at the same camp as Hopkins. Barger said he woke up floating on his air mattress.

"I thought I was dreaming," he said.

Barger said he knew where everyone lived in the area and saw another woman stranded. He went to 7 Hills to call for help.

The woman waded to safety by the time firefighters arrived. Salvation Army opened its doors later in the evening for the displaced who lost most of their belongings.

The people stranded in three other rescue calls also reached safety before firefighters could get there. Firefighters rescued two people stranded on a playset at Greathouse Park south of 15th Street just before 8 a.m., according to a fire official.

A portion of a slope at Kessler Mountain Regional Park slid behind the ball fields, near the largest parking lot. City staff will find the cause of the problem and fix it, Park Planner Alison Jumper said. Parks maintenance crews made the rounds to assess any damage.

"There's flooding all over the city," she said. "A lot of creeks are up out of their banks this morning."

Meteorologists warned flooding will again become a concern this weekend with 6-7 inches of rain expected for parts of southeast Oklahoma and western Arkansas. The thunderstorm potential will ramp up Friday and Saturday, according to the National Weather Service in Tulsa, Okla.

The National Weather Service recorded a little more than 1 inch of rain in Bentonville, but hazards presented themselves nonetheless.

Marc Trollinger, the county's fire marshal, confirmed the cause of the house fires.

"There were two fires I'm sure were caused by lightning strikes," Trollinger said. "We've also had two or three houses with trees through the roofs. There are lots of downed trees in people's yards, probably from ground saturation, and the trees are pulling down power lines."

McGowen said also the county had reports of falling trees hitting homes in the Beaver Lake and Little Flock areas.

"We'll just have a one-day window for it to dry out. With the saturation we've got now most of the rain we get from here on will be runoff," Frasier said.

In Springdale, Ivey Lane remained closed Wednesday afternoon, but several other streets opened back up to traffic, a city spokeswoman said.

Emergency workers responded to six calls of people stranded in water, most of whom tried to drive through it and got stuck, he said. Crews taped off the submerged Tilly Willy and Harvey Dowell road bridges.