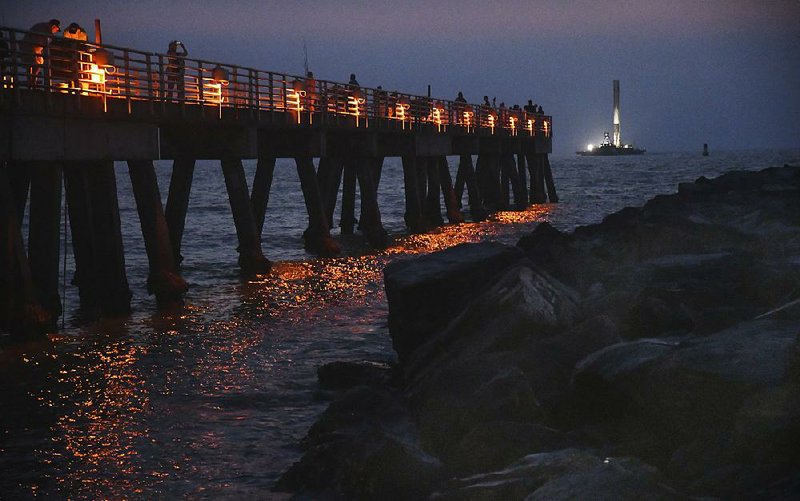 The first stage of a SpaceX Falcon 9 rocket is towed into Port Canaveral, Fla., aboard the drone ship Of Course I Still Love You before dawn on April 4. Successful launches by SpaceX are leading some investors to look at aerospace-related business startups. - Photo by AP / MALCOLM DENEMARK

After the success of nimble companies such as rocket- and capsule-maker SpaceX and Earth-imaging firm Planet, investors are starting to see aerospace startups as viable ventures. But it's unclear whether these young firms can work with big, established players such as Boeing Co. and Lockheed Martin Corp., or deliver the kind of quick returns that some investors expect.

Last month, a few aerospace startups gathered in El Segundo, Calif., to pitch their ideas to a room of investors and space aficionados at an event co-hosted by Aerospace Corp. and incubator Starburst Accelerator.

Some startups said large aerospace companies or investors expressed interest in their proposals; those talks are in early stages.

For successful space entrepreneurs with good ideas, "there is more and more money," said Francois Chopard, chief executive of Paris-based Starburst Accelerator. In the year since its founding, the incubator has worked with more than 150 startups and hosted events in cities such as Berlin, Montreal and Seattle. Starburst Accelerator also has a consulting arm, a venture fund and offices in Los Angeles, Singapore and Munich.

In one month, college friends Deepak Atyam and Alex Finch will graduate from Purdue University with master's degrees in aerospace engineering, and they plan to change the dynamics of building rocket engines.

The two are co-founders of Tri-D Dynamics, a startup that has developed technology and processes that improve on advanced 3-D printing methods for metalworking. Tri-D Dynamics plans to use those methods to churn out rocket engines of any size in a kind of automated assembly-line process to possibly shave months from the usual production process.

As a University of California, San Diego, undergraduate, Atyam led a student group in developing a 3-D printed rocket engine. Its test firing in the Mojave Desert was financed with money from NASA and $2,000 the group made by selling barbecued chicken. Two years later, Atyam and Finch followed that up with a test-firing of a second-generation engine that was about three times larger, with greater thrust.

The four-person firm already has a contract to produce a rocket engine by early 2018 for a small-satellite launch vehicle company it declined to name. And it has letters of intent from several small companies. Atyam and Finch estimate they have invested a total of $25,000 of their own money in Tri-D Dynamics. They're looking for a $1 million seed round this year.

"It's really important to find the right investor who knows exactly what to expect and what's needed to go into creating the products and services necessary to serve this industry," Finch said. "That payoff is going to come, but it may not be the two to three years they may have expected from an app or a software company."

Scott Montgomerie knew his startup was on to something when large crowds gathered to watch a demonstration of its augmented reality training program at a 2012 mining industry conference.

The Scope AR team showed how a worker wearing special glasses could watch computer-generated animations overlaid on a real-world mining truck fuse box to learn how to make repairs.

But when the San Francisco firm started looking for funding in 2015, it was a tough sell because augmented reality wasn't yet a mainstream concept, said Montgomerie, the company's chief executive.

That year, Scope AR was accepted into Silicon Valley tech incubator Y Combinator and later raised $2 million in a seed funding round.

The company's two technological platforms -- one for remote assistance and another that enables companies to make "smart instructions" for assembly workers -- have been used by Lockheed Martin, Raytheon, NASA and Boeing.