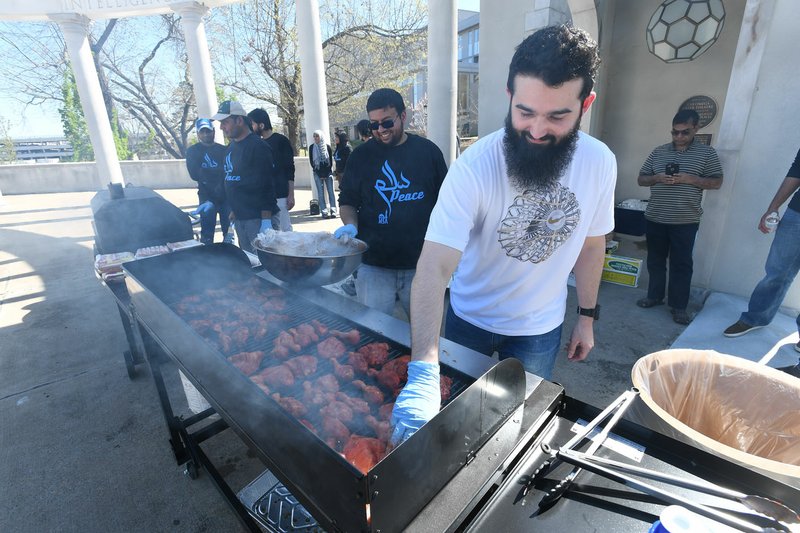 Bilal Ziada of Fayetteville grills chicken at the barbecue. Muslims believe God provides the needs of the body — “food, shelter, clothing, the ability to swallow and digest food …,” said Sheik Fahad Tasleem, the lead instructor with the Islamic Education and Research Academy in Houston, who spoke after the barbecue. - Photo by J.T. Wampler

Sixty percent of Americans claim they've never met a Muslim, said Faizullah Asif, a freshman at the University of Arkansas, quoting a 2014 Pew Research Center study. The Muslim Student Association -- with Asif listed as its president -- set out to lower that figure Saturday with a "Meet a Muslim" barbecue at the UA's Chi Omega Greek Theater, attended by several hundred people. 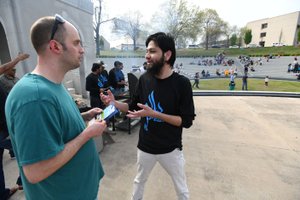 Photo by J.T. Wampler
Dan Severino of Fayetteville (left) talks with Nazmuddin Shaikh of Bentonville at the “Meet a Muslim” barbecue April 1 sponsored by the Muslim Student Association at the University of Arkansas. A 2014 Pew Research Center study found 60 percent of Americans say they’ve never met a Muslim, and the student group set out to change that. 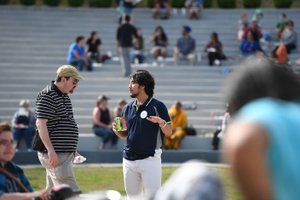 Photo by J.T. Wampler
Jim Hogan of Fayetteville (left) visits with Ayman Omar at the “Meet a Muslim” barbecue. When people don’t interact with Muslims, they tend to believe the negative stereotypes of members of the Islamic faith, said Faizullah Asif, president of the Muslim Student Association. “This is the best way to dispel the misconceptions, in a friendly environment,” he said.

"When they don't have that personal interaction, they believe the stigma, the rhetoric, the media, what they hear from their parents," Asif said. "This is the best way to dispel the misconceptions, in a friendly environment."

Asif and Wisam Siddiqui, a UA engineering graduate now working in Nashville, Tenn., and a mentor for the student organization, reported they did meet several people who had never met a Muslim.

"They grabbed some food, and it was like, 'Hey! What's up?'" Siddiqui reported.

"We're just like everyone else," he said of his fellow Muslims. "We're students, professors, doctors, engineers ... you name it!"

A group of girls at the barbecue were sitting with their Muslim friend of several years, Nourhan El-Nagdy from Egypt. When asked what makes El-Nagdy special as a Muslim, Karly Eaton replied:

"She's got a great spirit of hospitality and openness and welcome. That's just who she is," added Rebecca Huff.

"She's kind and caring and thoughtful. She has a gentleness," continued Katy Hill.

"She's one of the bravest women I know," said Diane Serenson, a member of Temple Shalom of Northwest Arkansas in Fayetteville, of El-Nagdy's decision to travel so far for her graduate education in comparative literature and cultural studies.

The girls met more than a year ago as part of the iFriend program that provides international students with "campus cousins" to help them adjust to life in the United States.

"She was trying to find a bank, and we had a friend who worked at one," Eaton said, revealing a slice of life for college students living on their own for the first time.

And what makes El-Nagdy ordinary?

"She listens to music, goes to movies, does stuff everybody does," Huff said.

"Because I am also coming from the Mid-East [in addition to being Muslim], there are a lot of stereotypes," El-Nagdy said. "I just want to be as open as possible. I want people to be able to approach me and ask about my faith, my religion. We are just ordinary humans."

"One thing I'd like to point out is, Islam is the only religion besides Christianity that sees Jesus as a role model," Asif said of his religion.

The Muslim Student Association shared more on Islam after the picnic with a presentation by Sheik Fahad Tasleem, the lead instructor with the Islamic Education and Research Academy in Houston.

"What is the one thing most Muslims find so annoying? What are they talking about among themselves?" Tasleem asked to open his presentation. "It's the fact that they're painted with a broad brush as being terrorists, when in reality, only a super-minute group of Muslims think like that."

"I believe that one dominant depiction of Muslims is the extreme sect of Islam that perpetrates terror, whereas the vast majority of Muslims -- both abroad and in the United States -- simply want to live peaceably with their neighbors and thrive in community," commented the Rev. Clint Schnekloth, pastor of Good Shepherd Lutheran Church in Fayetteville.

Thanks to the current news media, Americans see only one side of Muslims portrayed, Tasleem said. "And it's not the peaceful Muslim couple that plays golf with Joe."

Tasleem presented a scenario in which the Muslim world had only one view of Americans, from a television show that played around the clock.

"The only show they see from America is 'Jerry Springer,'" he said. "They think all Americans are like those on 'Jerry Springer.' And I think that's really only a small minority of the population in America."

"Every style and tradition of faith has this," Tasleem said of spirituality.

"Christian spirituality focuses on faith practices, like prayer, worship, works of love," Schnekloth said. "I would tend to think most Christians believe spirituality is the set of practices that draw us closer to God in worship, and closer to our neighbors in love."

"But what does it mean to be spiritual in Islam? It starts with you," Tasleem said.

In Islamic teachings, the human being is composed of two things: the body and the spirit, Tasleem explained.

"People believe God provides the needs of your body -- food, shelter, clothing, the ability to swallow and digest food ..."

The other part of the body is the spirit, which can be hard to explain. "You can't take it to the lab and prove it," Tasleem said. "Human consecration is often discussed, and it's a hard problem. How do you go to consciousness?

"There is no divinity in a human being, but there is some yearning to be with our source, our maker."

So while the spirit yearns for the creator, the base human desires want the opposite, he said.

"It's like riding a horse. The horse desires to run like crazy, but the rider desires a smooth ride. How the ride goes depends on how strong the person on the horse's back is. The person is like the spirit."

"Islam does not try to destroy desires," he continued. "They have intrinsic purpose. But if you follow them too far, you get in trouble.

"You need and desire food. But if you eat like there's no tomorrow, you know where it takes us ... There goes the six-pack.

"You want to stay in balance, not let your desires stray, but keep them in control."

In Islam, if the desires travel too far, the person enters the realm of sin, Tasleem said.

"Christians have historically tended to consider 'falling to desires' as sin," Schnekloth said, noting the similarity between the faiths. "Almost all of the seven deadly sins are about various desires, for example."

"God is the sun, and the spirit is the sun's ray," Tasleem illustrated. "The rays are not the sun, but are connected to the sun. But there are places where the rays are cut off.

"Sin clouds the heart, like clouding the sun. In Islamic tradition, every time a person sins, a black dot is placed on his heart, until the heart is totally blackened and the spirit is snuffed out.

"As Islamic spirit strengthens, the spirit controls the body."

Islam recognizes several levels of spirituality, Tasleem continued, which can correspond with roles within the Islamic faith.

• Islam is a state of submission, he said. "You are surrendered and obedient to God. You know nothing is worth worshiping but God."

Hameed Naseem explained one of Tasleem's comments about the Arabic language. Naseem is the president of the Tulsa, Okla., chapter of Ahmadiyya Muslim Community and faculty adviser of Al-Islam Students Association at the university.

"You add a prefix 'mu' to the verb. The word, aslam, means to submit or to surrender in Arabic, according to Tasleem. Therefore 'mu' plus aslam becomes Muslim, meaning one who submits, a submitter or a surrenderer," Naseem said.

"By meaning of the word," Tasleem said, "all the prophets -- John the Baptist, Moses, even Jesus [who today's Muslims consider to be a prophet] are Muslim."

"I think it's true that Jesus 'submitted' to the will of God," Schnekloth said. "Jesus even prays at the cross: If it might be, let this cup pass from me, but not my will but yours be done, O Lord -- Luke 22:42.

In Islam, a believer is just "entering into the fold as Muslim," Nassem said.

• Iman is a higher level. The believer is "in the process of building sincere faith," Nassem said.

"A person [in iman] has internal strength to the point of spiritual peace," Tasleem explained. "They think rationally and act accordingly, which gives them internal security. Security in the heart is an ideal state. You enter a state of friendship, which linguistically means 'close to or nearness.'

"The Quran says, people who are closest to God have no fear, no sadness," Tasleem said in Arabic, then translated to English.

Tasleem noted, that even in the iman state, people will feel sadness when a loved one dies, for example, but there is no sadness associated with regret, "if only I had ...," Tasleem gave as an example.

"In Islam, a decree of God says that it's in the hands of God. 'What happens, happens,'" he said.

"Those in the iman state understand the one in charge is their creator of the heavens and earth, and they have security."

"One of the most frequent sayings of Jesus is, 'Do not be afraid,'" Schnekloth noted. "There's definitely a sense in Christianity of trusting God, trusting that God will provide. 'Give us this day our daily bread.'

"Or consider Jesus' sayings about the flowers." And why do you worry about clothes? See how the flowers of the field grow. They do not labour or spin. -- Matthew 6:28.

• Ihsan is the most beautiful state, Tasleem continued. "You worship God as if you could see him, and not just that he sees you -- and you know he sees you.

"Like the second you see a cop, you brake even though you're already going the speed limit," Tasleem illustrated.

"[In ihsan] the Muslim is performing deed beautifully, but only for gaining God's pleasure and having no other motive," Naseem explained.

Ihsan also means excellence. Asking his Fayetteville audience about the Razorback basketball team and its players, he used Daryl Macon's play as an example. "So Daryl Macon is at the three-point line. He lets go a jump shot, and it's all net. It's elegance.

"That's ihsan, but what the observer sees on the outside is just the result," Tasleem said. "You do not see the years, months, days, hours, minutes of hard work. You don't see the sweat, blood and tears. You see the end result is beauty.

"When someone is in ihsan, you don't see the years of working to get to that state."

"Within Islam, some things are nonnegotiable, irrefutable," Tasleem said.

• Justice. "It is the Muslims' duty to establish justice, be witnesses for God," Tasleem began. "It is incumbent on every single Muslim, in every situation, every time, no matter what. You can't be unjust."

"There is no crossover: God cannot become sticks and stones, and man can not become God."

"This is probably where Islam and Christianity divide the most clearly," Schnekloth said. "Christians believe, that in Christ, God and humanity become one, that Christ was both fully human AND fully God. That's a nonnegotiable for Christians, and so the doctrine of the Trinity in Christianity becomes one of the main places for continuing dialogue between Muslims and Christians.

"Christians are called to work for justice and peace," Schnekloth continued. "That's a nonnegotiable. I think you could say the most clear nonnegotiable in Christianity is: Love the Lord your God with all your heart and soul and mind, and love your neighbor as yourself -- Luke 10:27.