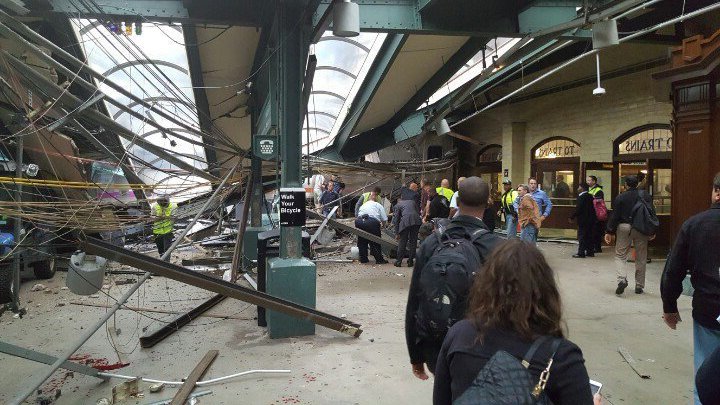 This photo provided by Ian Samuel shows the scene of a train crash in Hoboken, N.J., on Thursday, Sept. 29, 2016. A commuter train barreled into the New Jersey rail station during the Thursday morning rush hour, causing serious damage. The train came to a halt in a covered area between the station's indoor waiting area and the platform. A metal structure covering the area collapsed. ( Ian Samuel via AP)

HOBOKEN, N.J. — A rush-hour commuter train crashed through a barrier at the busy Hoboken station and lurched across the waiting area Thursday morning, killing one person and injuring more than 100 others in a wreck that renewed questions about whether long-delayed automated safety technology could have prevented tragedy.

People pulled chunks of concrete off pinned and bleeding victims, passengers kicked out windows and crawled to safety, and cries and screams could be heard in the wreckage at the station just across the Hudson River from New York City as emergency workers rushed to reach commuters in the tangle of twisted metal and dangling wires.

The New Jersey Transit train ran off the end of its track as it pulled into the station, smashing through a concrete-and-steel bumper. It apparently knocked out pillars as it ground to a halt in the waiting area, collapsing a section of the roof onto the train.

To view this video, you need to have Flash Player 8.0 or later installed.  Click here  to get the latest Flash player.

To view this video, you need to have Flash Player 8.0 or later installed. Click here to get the latest Flash player.

"All of a sudden, there was an abrupt stop and a big jolt that threw people out of their seats. The lights went out, and we heard a loud crashing noise like an explosion" as the roof fell, said Ross Bauer, who was sitting in the third or fourth car when the train entered the historic 109-year-old station, a bustling hub for commuters heading to New York City. "I heard panicked screams, and everyone was stunned."

The train's engineer was pulled from the mangled first car and hospitalized in critical condition. He was cooperating with investigators, Gov. Chris Christie said.

A woman standing on the platform — identified as Fabiola Bittar de Kroon, 34, of Hoboken — was killed by debris, and 108 others were injured, mostly on the train, Christie said. Seventy-four of them were hospitalized, some in serious condition, with injuries that included broken bones, bumps and gashes.

"The train came in at much too high rate of speed, and the question is: 'Why is that?'" Christie said. New York Gov. Andrew Cuomo said investigators will determine whether the explanation was an equipment failure, an incapacitated engineer, or something else.

Some witnesses said they didn't hear or feel the brakes being applied before the crash.

The National Transportation Safety Board sent investigators. Among other things, they will want to know whether the engineer was distracted or fatigued, said Bob Chipkevich, former head of the agency's train crash investigations section.

Investigators were working to extract the two black-box data recorders that would show how fast the train was going.

None of NJ Transit's trains is fully equipped with positive train control, a safety system designed to prevent accidents by overriding the engineer and automatically slowing or stopping trains that are going too fast. Positive train control relies on radio and GPS signals to monitor trains' positions and speed.

The NTSB has been pressing for some version of the technology since at least 1990, and the industry is under government orders to install it, but regulators have repeatedly extended the deadline at railroads' request. The target date is now the end of 2018.

"While we are just beginning to learn the cause of this crash, it appears that once again an accident was not prevented because the trains our commuters were riding lacked positive train control," said Rep. Sean Patrick Maloney, D-N.Y. "The longer we fail to prioritize investing in rail safety technology, the more innocent lives we put in jeopardy."

But both Cuomo and Christie said that it is too soon to say whether such technology would have made a difference in the Hoboken crash.

Over the past 20 years, the NTSB has listed the lack of positive train control as a contributing factor in 25 crashes. Those include the Amtrak wreck last year in Philadelphia in which a speeding train ran off the rails along a curve. Eight people were killed.

Check back for updates and read Friday's Arkansas Democrat-Gazette for full details.