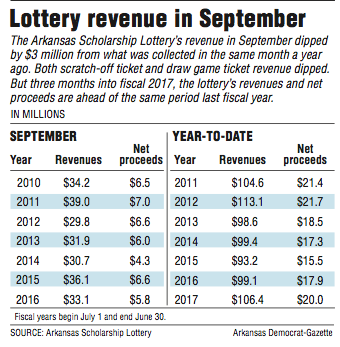 The Arkansas Scholarship Lottery's revenue slipped in September by $3 million over the same month a year ago to $33.1 million as both scratch-off and draw-game sales dipped.

The lottery's net proceeds for college scholarships last month also dropped by about $800,000 to $5.8 million, the lottery reported this week in its monthly report to the Legislative Council's lottery oversight subcommittee and Gov. Asa Hutchinson.

"Our budget for this year anticipated a drop in sales, so some decrease was anticipated," lottery Director Bishop Woosley said Tuesday.

"We [also] were competing against a very good month of sales in September of last year," he said in a written statement. "There was a Powerball jackpot of over $300 million, a Natural State Jackpot of $345,000 and a very good instant ticket launch, which had a new $20 ticket with a different type of top prize than what we had offered in the past."

"This year, our instant games for September launched on Aug. 30, so the first two days of sales counted in August. Last year, the games came out on Sept. 1, 2015," said Woosley, who has been the lottery's director since February 2012.

September is the third month of fiscal 2017, which started July 1.

The lottery's revenue and net proceeds for college scholarships in July reached record levels for that month. That's because the lottery reaped the benefits of increased revenue from a national Mega Millions jackpot of more than $500 million and a national Powerball jackpot of nearly $500 million before winning numbers for both jackpots were drawn in other states.

It has helped finance more than 30,000 Arkansas Academic Challenge Scholarships during each of the past six fiscal years. The Legislature has cut the size of future scholarships three times partly because net proceeds in several years lagged initial projections.

The lottery's revenue and net proceeds rebounded last fiscal year, after dipping each of the previous three fiscal years from a peak in fiscal 2012. Key lawmakers have said they want to make sure the lottery's rebound is sustainable before changing the current scholarship program.

The lottery's scratch-off ticket revenue in September dropped from $29.2 million a year ago to $27.1 million, while the lottery's draw-game revenue fell from $6.7 million to $5.8 million, the lottery reported. Draw games include Powerball, Mega Millions, the Natural State Jackpot, Cash 3 and Cash 4.

Net proceeds dropped in September to $5.8 million from $6.6 million a year ago because "generally when sales drop there is a corresponding drop in proceeds," Woosley said. "This is especially the case when there is a significant difference in draw-game sales month over month."

Under state law, the lottery transfers its unclaimed prize balance, minus $1 million, to scholarships at the end of each fiscal year. The lottery reported an unclaimed prize fund balance of $3.5 million as of Sept. 30.