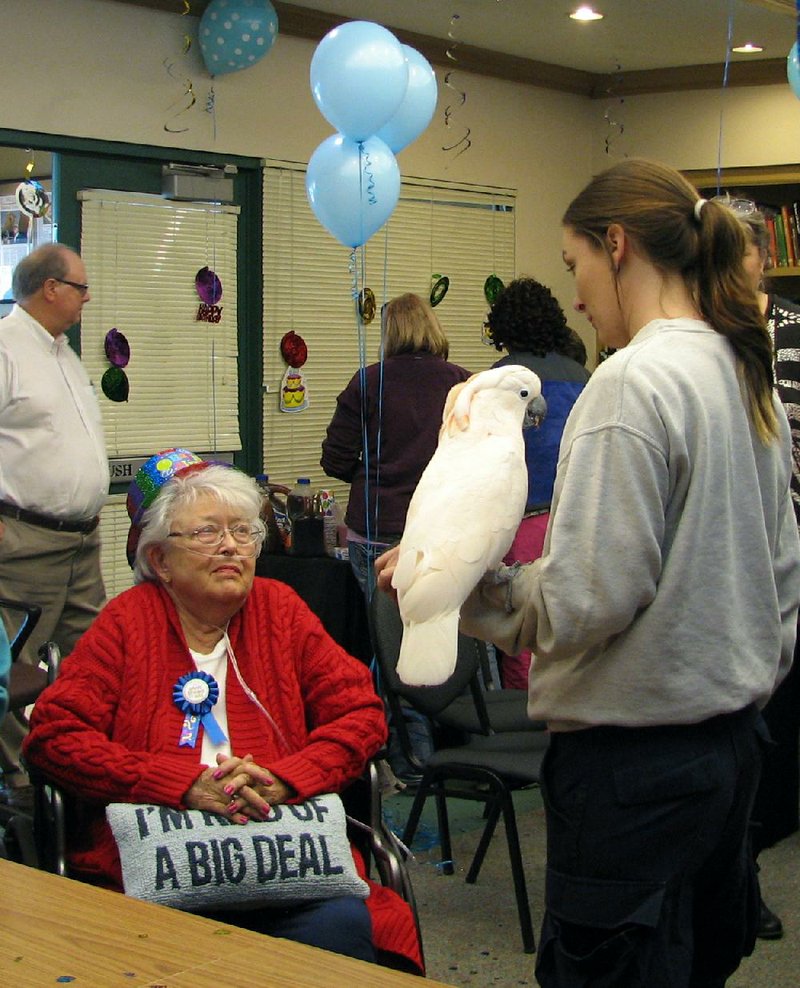 Jayne Jackson, who died Dec. 17, is shown at her 70th birthday party with Little Rock Zoo staff members in November. Jackson left the zoo a trust valued at nearly $3 million, and an estate sale this week at her home will also benefit the zoo.

A trust donation valued at almost $3 million has been given to the Little Rock Zoo, marking the largest gift the zoo has ever received.

The money belonged to Jayne Jackson, described as "an animal and zoo lover," who died in December. The trust creates an endowment fund called the Jayne and Fletcher Jackson Foundation.

The gift is the largest donation in the zoo's 90-year history. The previous record donation to the zoo came from the Laura P. Nichols Foundation in 2006. The foundation gave $775,000 for naming rights to the African penguin and cheetah exhibits.

Jackson had only just made a connection with zoo officials in September after a friend of hers phoned the zoo and told them about some collector carousel horses Jackson wanted to donate.

"Overall, I would say she just was filled with a lot of joy and a lot of happiness with animals," Altrui said. "Animals are what made her happy. It was no surprise after we got to know her that the zoo was what she wanted to leave her estate to upon her passing."

Indeed, Jackson had already made arrangements and had legal documents in place to set up the trust with the zoo as the benefactor long before she had met Altrui and others in September. It was a decision she and her late husband had made together.

"Jayne Jackson connected with animals and found a way to connect with the Little Rock Zoo forever by establishing this generous endowment fund," said Lisa Buehler, chair of the Arkansas Zoological Foundation. "... The establishment of this endowment provides much-needed funding for the zoo now and in the future. Jayne has certainly left her mark."

There are no set plans on what the endowment will fund right now. The dollar amount is not set in stone yet because it will be based off of investments and how the market is performing, Altrui said. More details will be available at the end of the third quarter.

She celebrated her last birthday at the zoo in November with friends and riding the Over-the-Jumps Carousel.

"She exclaimed that it was the best birthday party of her life," a zoo news release said.

Jackson was especially intrigued with the bird population at the zoo and loved that the birds are part of the zoo's education outreach department and that the public gets to interact with them, Altrui said.

The bear exhibit was also an area of interest for Jackson because her nickname for her husband was "Bear."

"I think likely you'll see some of this money going toward the bear exhibit because of that. She greatly wanted us to do something with that exhibit," Altrui said.

Born in Little Rock, Jackson graduated from the University of Arkansas at Little Rock with a bachelor's degree in business administration. She met her husband, Fletcher Jackson, at the U.S. attorney's office where she worked. She also worked as a jury clerk for the U.S. District Court in Little Rock.

An estate sale at Jackson's home, 1 St. Charles Court, will take place Thursday through Saturday and benefit the zoo.

There will be a preview night Wednesday from 5 p.m. to 7 p.m. Tickets must be purchased to the preview night, and the money benefits the Zoo Foundation. There is no cost to attend the sale Thursday through Saturday.

"The Zoo Foundation would like to remind potential donors to include the Arkansas Zoological Foundation in their estate planning. Doing so can be incredibly meaningful and be a beautiful tribute at someone's passing," Buehler said.