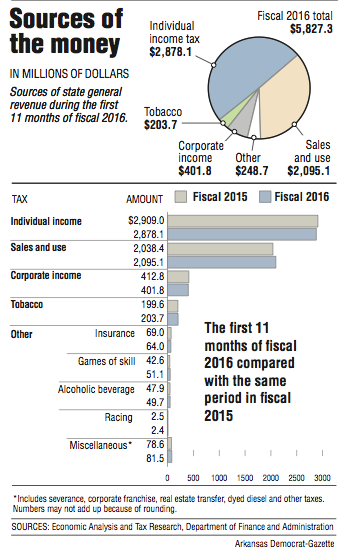 State general revenue in May increased by $5.3 million from a year ago to $432.9 million, but that fell $7.6 million short of the state's forecast.

A drop in collections from utilities attributed to mild weather also affected the bottom line, state Department of Finance and Administration officials said Thursday after they released the monthly revenue report.

"I think we are on a track with a continued recovery, excluding this monthly volatility that affects these monthly reports," said John Shelnutt, the state's chief economic forecaster.

Last month's collections weren't a record for May. The record is the $443.2 million collected in May 2013, said Whitney McLaughlin, a tax analyst for the finance department.

"Our budget remains in a solid position with a revenue growth of 3.5 percent above last year and a revenue pattern that is above forecast," Gov. Asa Hutchinson said in a written statement.

"This puts the state in a strong position to realize a substantial surplus," the governor said. "The Legislature has wisely made it a priority to create a long-term reserve fund. This is an effective budget tool, and while we will use surplus funds in the future to meet extraordinary needs of our state, my hope is that we will continue to build our long-term reserve funds."

Arkansas' tax refunds and some special government expenditures, such as court-mandated desegregation payments, come off the top of total revenue, leaving a net amount that state agencies are allowed to spend.

According to the finance department, May's general revenue included:

The gains from the withholding tax on payrolls accounted for most of the increase from a year ago, the department said.

The state collected $200.4 million in withholding taxes last month -- an increase of $17.7 million compared with May 2015 -- and $9.6 million above the state's forecast, McLaughlin said.

Shelnutt attributed the increase in withholding taxes to an improving economy and May having one more Friday payroll compared with a year ago.

Rather than a softening of consumer spending, state officials said, the drop in sales-and-use tax collections is tied to the $8.2 million refund to AT&T for overpayment of taxes; a $2.8 million drop in collections from utilities that saw reduced usage from mild weather; and monthly volatility in collections.

The retail component of sales taxes has increased by 5.4 percent over the past three months compared with the year-ago period, said Shelnutt.

Richard Wilson, assistant director of research for the Bureau of Legislative Research, said on May 18 that the state could have $160 million to $180 million in unallocated surplus at the end of fiscal 2016 based on conservative budgeting and lower-than-expected individual income tax refunds. Meanwhile, the finance department in February projected a $35.9 million surplus for the fiscal year.

But Wilson on Thursday held fast to his prediction.

Asked what the 2017 Legislature should do with any unallocated general revenue surplus from fiscal year 2016, House Speaker Jeremy Gillam, R-Judsonia, said, "We are OK with not spending it." Gillam said he had discussed the surplus with Senate President Pro Tempore Jonathan Dismang, R-Searcy.

"It is OK to have the money in the bank for emergencies," Gillam said.

Dismang said the Legislature could add unallocated surplus funds to the long-term reserve fund for use in case of a future economic downturn, as well to prioritize paying off debt.

But he said there has not been a "broad discussion" about using surplus funds.

Legislation enacted in a recent special session will devote 25 percent of surpluses to help increase state highway funding by $50 million a year. That $50 million will match $200 million in federal funding during the next five years under the new federal highway bill.

The law allows $40 million of the state's rainy-day fund to be used to help increase highway funding in fiscal 2017.

The rainy-day fund has a balance of $30.9 million with $210,007 remaining to be distributed to the fund this month, said McLaughlin of the finance department.

So far in fiscal 2016, the state has spent $35.6 million in rainy-day funds on a variety of needs, including Department of Correction renovations, paying for out-of-state prison beds and the Arkansas State Police's radio network upgrade, according to the Bureau of Legislative Research.

There will be a $50 million transfer of surplus funds to the rainy-day fund on July 1 as part of the Revenue Stabilization Act that distributes $5.33 billion in general revenue in fiscal 2017 to various state agencies, said Jake Bleed, a spokesman for the finance department.