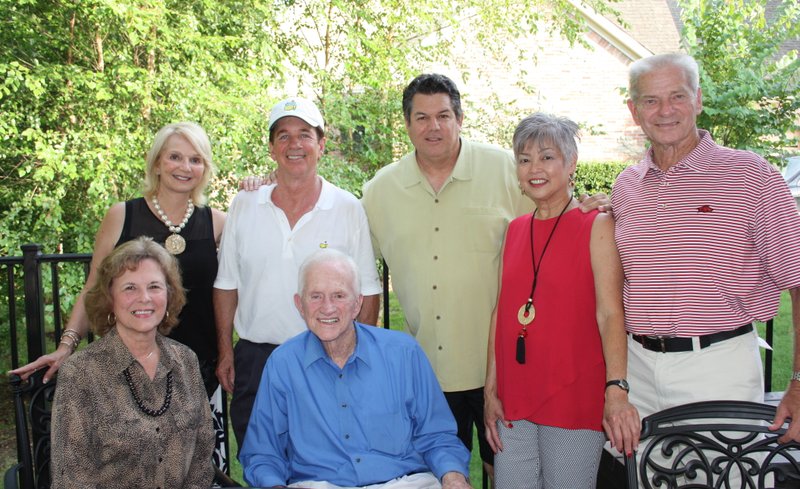 Gen and Frank Broyles (seated), Mary Bassett and Hank Broyles (standing, from left), Tom Pagnozzi and Caroline and Norm DeBriyn gather at An Evening with Pagnozzi Charities on July 9.

Walton Arts Center volunteers were treated to a '70s-themed evening July 6 at George's Majestic Lounge in Fayetteville. The group honors its volunteers with their own night each year to recognize their work and the hours they give the center.

One hundred eighty-three volunteers gave more than 20,700 hours between November and June to the Walton Arts Center in Fayetteville. Volunteers serve many roles in areas such as front of house, studio and education outreach, special events, administration and working with resident companies TheatreSquared, Trike Theatre, Symphony of Northwest Arkansas and the Community Creative Center.

What: The nonprofit organization recognizes its volunteers each year with an evening in their honor.

Where: George’s Majestic Lounge in Fayetteville

Who: Habitat for Humanity of Washington County

What: Proceeds from the benefit will help support the nonprofit organization’s Women Build projects.

An Evening with Pagnozzi Charities

What: Mary Bassett and Hank Broyles welcomed charity supporters to their home for the evening.

Where: Fayetteville home of Mary Bassett and Hank Broyles

This year's top 10 volunteers are:

Habitat for Humanity of Washington County backers hammered out a successful benefit with the second annual Heels and Hammers on July 8 at Sassafras Springs Vineyard in Springdale.

Proceeds from the evening will help support the nonprofit organization's Women Build program.

Mary Bassett and Hank Broyles welcomed guests poolside at their home July 9 for An Evening with Pagnozzi Charities.

The nonprofit organization founded by Tom Pagnozzi, former St. Louis Cardinals and Arkansas Razorbacks catcher, in 1999 to "provide scholarships to youth from low income families throughout Northwest Arkansas, providing them with equal access to the same athletic experiences as their peers."

Scholarships help families pay for registration, uniforms and other fees associated with organized sports. The group provided financial aid and sports equipment to more than 1,000 athletes in 2015.

Next up for the charity is its 25th annual Tom Pagnozzi Charity Golf Tournament, Ultimate Tailgate and Auction, Oct. 21-22.

Among those pitching in to support Pagnozzi Charities were Gen and Frank Broyles, Caroline and Norm DeBriyn, Scott Hancock, Mary Beth and Tim Brooks, Tareneh and Lance Manning, Jamie and Mike Sims and Missy and Chris Harlin.